A typical communication pattern of people with Alzheimer’s disease

Dementia, in any form, is a heartbreaking disease that can take away one’s thinking and judgement abilities before they pass. To save face, people with dementia often pretend to know answers to questions, even if they really don’t. This often hides the severity of the disease and exasperates the fears and frustrations of the people who care for them. The act of pretending to know answers to keep up appearances is referred to as “saving appearance responses” (SARs), and a research group from Kumamoto University in Japan has performed the first statistical analysis of SARs in patients with various forms of dementia. Their findings revealed that those face-saving responses are particularly common in people with Alzheimer's disease (AD), leading the researchers to recommend that doctors and caregivers should develop a more respectful attitude toward dementia patients who exhibit SARs because SARs imply conflicted feelings about questions that patients cannot answer correctly.

People with dementia, despite experiencing various problems in their social life caused by memory impairment, often make conversation as if they remember what they forgot. This communication style (using SARs) is well-known among those who treat and care for people with dementia. Many reports on SARs have been made in Japan, but most are based on the experiences and impressions of doctors, nurses, and clinical psychologists, and do not include enough numerical data.

Kumamoto University researchers compared the appearance frequency of SARs observed during cognitive function examinations using definitions from preceding research for four pathological conditions that cause dementia, AD (107 patients), AD with cerebrovascular disease (16), Lewy body dementia (30), and mild cognitive impairment  (55). More than half of the AD patients were found to have SARs and it quickly became clear that face-saving reactions and attitudes in these patients occurred much more frequently compared to those Lewy body dementia and mild cognitive dysfunction. The examination was statistically adjusted for sex, estimated duration of disease, cognitive function, and frontal lobe function. Researchers found that AD was 4.24 times more likely than Lewy body dementia to produce SARs, and 3.48 times more likely than mild cognitive impairment.

"SARs are a patient’s effort to show that they have no cognitive problems, but it seems that there are various psychological conflicts involved," said Kumamoto University’s Dr. Masateru Matsushita of the Center for Medical Education and Research, leader of the study. "The reason more SARs are seen in AD may be because even though the memory function of the brain is in decline, thinking and judgment abilities are barely compromised. Attention to SARs might be helpful for more accurate dementia diagnosis. We expect that a better understanding of the characteristics of SARs, particularly in AD, will lead to earlier detection and better medical care for people suffering from dementia." 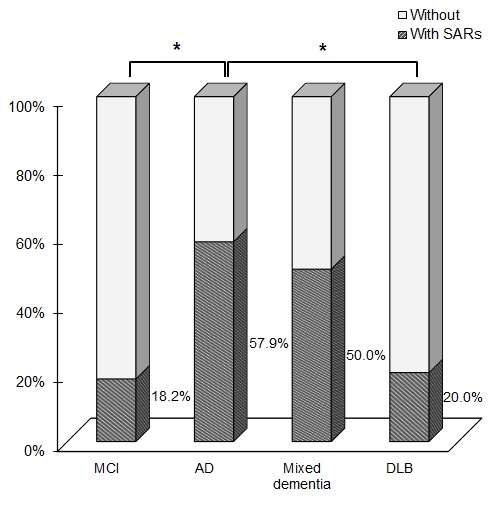 Comparison of repairing responses in four types of dementia

[Images Details]
CREDIT: Dr. Masateru Matsushita
USAGE RESTRICTIONS: This image may only be used in conjunction with the accompanying release, or stories written about the work described in the release with reference to the original work.