Research from the Eisei Bunko Research Center of Kumamoto University reveals that Tadatoshi Hosokawa, a 17th century lord of Kyusyu, Japan, ordered his people to produce not only wine but also opium for medical purposes.

Wine making appears in 15th and 16th century Japanese trade documents, diaries, catalogues, and other texts. Christian missionaries and trade merchants delivered wine to Japan from Western Europe, and it continued as a luxury import item for over a century. It was believed that large-scale Japanese wine brewing began in the 1870's. However, as reported in 2016 by Kumamoto University’s Eisei Bunko Research Center, the wine produced by the Hosokawa family in the Kokura Region began more than 200 years earlier in 1627. The researchers also showed that Lord Hosokawa ordered his liegeman, Tarouemon Ueda, to make wine from wild grapes and send it to Edo, the former name of Japan’s capital city.

A detailed investigation by the Eisei Bunko Research Center has recently clarified that wine was only produced from 1627 to 1630, and that Lord Hosokawa ordered the wine be sent to Edo for each of those four years. During that time, winemaker Taroemon was promoted to vassal for his successful wine and medicinal sake making techniques. Researchers found that black soybeans were used in addition to wild grapes in the wine making process. Black soybeans promote fermentation and it is believed that the addition of black soybean yeast helped ferment the wild grapes, which have a relatively low sugar content. In essence, Lord Hosokawa’s wine was made by fermenting wild grapes, rather than by simply soaking wild grapes in alcohol.

Surprisingly, the researchers found that the Hosokawa family was also producing opium in 1629. It is thought that opium imported from Nagasaki was used for medicinal purposes, such as sedation, analgesia, cough suppression, and hypnosis. The winemaker Taroemon became responsible for opium production, which started in the spring and produced about 1.27 kg of opium by autumn. A description of opium imports was found in the historical record from the previous year (1628), as was a note from Lord Hosokawa which read, "I am dissatisfied with the opium ordered (from Nagasaki) so it shall be returned." It may be inferred that Lord Hosokawa desired a commodity of higher quality.

Evidence of wine imports to the Kokura region is older than the description of opium imports. In 1623, a letter written by Lord Hosokawa ordered the purchase of sweet wine from Nagasaki. Two years later, in 1625, he again ordered the purchase of sweet wine. In 1631, after the Hosokawa Family’s winemaking period appears to have ended, there were further instructions to procure 3.6 liters of fine wine for medicinal use, with imports continuing until 1639.

In 1638, a sick Lord Hosokawa entered the Shimabara Rebellion (an uprising of mostly Catholics that resulted in the prohibition of Christianity) on the side of the central government. He commanded that wine be sent to Kumamoto, which became his territory in 1632, for medical use on the battlefield. In that same year, another regional lord with an affinity for wine requested some through Lord Hosokawa’s son. Lord Hosokawa replied, "I have contacted Nagasaki, but since wine is known to be used when converting to Christianity, merchants have stopped trading it to avoid suspicion that they may be Christians." Lord Hosokawa then arranged to send wine that was already in his possession. From these transcripts, researchers uncovered that both lords and merchants recognized that wine had become a prohibited Christian drink.

In the following year, Lord Hosokawa appears to have made one last order to send wine to Edo. After making this request to a Nagasaki merchant, documents from the Hosokawa family concerning wine have not been found. For an ailing Lord Hosokawa, it is inferred that wine had great medicinal value, but as a lord famous for his loyalty to the central government he could not continue to produce or import the forbidden Christian potation. His suffering is evident in the documents from this time period.

These historical texts show that Taroemon and his company had innovative technologies for making western food and western watches, and that Lord Hosokawa, who promoted him to an important position, was highly interested in such items and technologies. After the Shimabara Rebellion was suppressed, the central government prohibited port entry from Portuguese ships, eliminated Christianity, and restricted trade with Western Europe to only the Netherlands, which promised not to propagate Christianity in Japan. This marked the beginning of Japanese isolationism.

The research performed here by Kumamoto University’s Eisei Bunko Research Center clearly shows that Lord Hosokawa had a passion for importing and producing wine during the twenty years before Japan’s isolation.

The results of this research was published in the first issue of the Bulletin of the Eisei-Bunko Research Center on March, 2018. 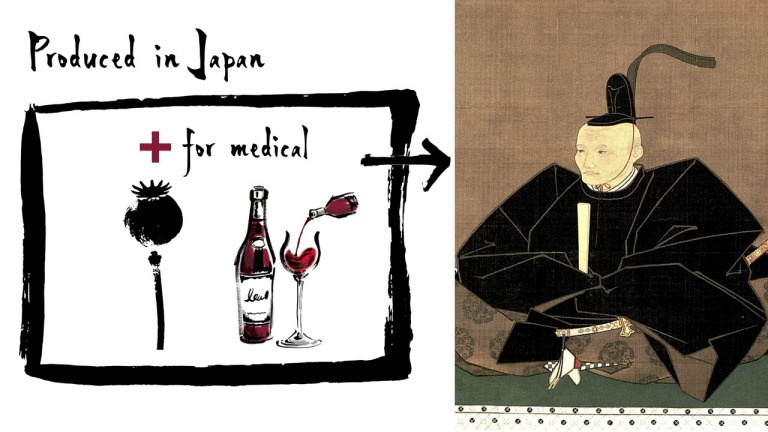 TITLE:
Wine and opium were both briefly made in Japan nearly 400 years ago

CAPTION:
It has been confirmed by the Eisei Bunko Research Center of Kumamoto University, Japan that wine and opium was made for medical use in Lord Hosokawa’s own territory nearly 400 years ago.

[Image Details]
CREDIT: Prof. Tsuguharu Inaba
USAGE RESTRICTIONS: This image may only be used in conjunction with the accompanying release, or stories written about the work described in the release with reference to the original work.