Determining the cause of difficult-to-control mitochondrial diseases

When mutations occur in genes that design mitochondrial proteins, a severe neurological disorder called mitochondrial disease can develop. Mitochondrial myopathy, encephalomyopathy, lactic acidosis, stroke-like symptoms (MELAS) or Myoclonic Epilepsy with Ragged Red Fibers (MERRF) are major forms of mitochondrial disease that are characterized by whole body muscle weakness and declining cardiac function. To date, there is no effective treatment and many patients die a few years after onset.

The molecular mechanism underlying the pathogenesis of MELAS and MERRF is not yet fully understood, but it has been reported that taurine, one of the functional amino acids, is involved. In mitochondria, it is known that taurine binds to tRNA, which is also known to be related to protein synthesis, and that this binding is reduced in patients with MELAS and MERFF. However, the detailed molecular mechanisms by which the decrease of taurine binding to tRNA induces these serious symptoms was unknown.

To elucidate this mystery, the research group first identified the enzyme that conjugates taurine to the tRNA molecule. They then deleted the enzyme in a mouse model and found that protein translation in the mitochondria was greatly reduced. This result demonstrated that taurine is essential for protein synthesis in mitochondria.

In recent years, compounds that inhibit abnormal protein aggregation have been developed. One of these compounds, TUDCA (ursodeoxycholic acid), is a substance originally present as a secondary bile acid in the body. Administering TUDCA to cells without taurine-tRNA binding resulted in the near complete disappearance of aggregates and the reduction of cellular stress. Moreover, when TUDCA was administered to mitochondrial disease model mice with reduced taurine-tRNA binding, cell damage was also improved.

"We believe that this research will lead to the development of therapeutic drugs for mitochondrial diseases in which taurine's activity declines, such as MELAS and MERRF," said Associate Professor Wei Fan-Yan of Kumamoto University, leader of the research project. "TUDCA, which has been shown to be effective in cell and model animals, is used as a remedy for liver diseases in Italy and other European countries, so its pharmaceutical safety has already been confirmed. We are planning to conduct clinical trials in the near future to determine whether TUDCA is an effective remedy for mitochondrial diseases in humans."

This research result was posted online in the journal "Cell Reports" on 9 January 2018.

[Fund]
PRESTO (Precursory Research for Embryonic Science and Technology) from JST: "Creation of Innovative Technology for Medical Applications Based on the Global Analyses and Regulation of Disease-Related Metabolites"
http://www.jst.go.jp/kisoken/presto/en/research_area/ongoing/106sikkan.html 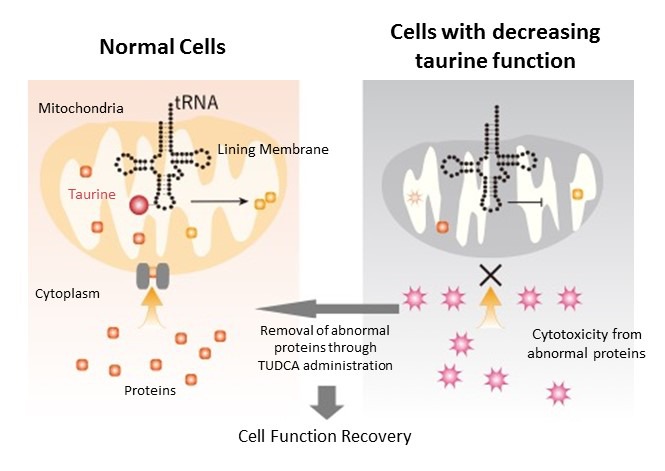