A Japanese research group has successfully grafted human iPS cell-derived inner ear cells that express human-derived proteins into the inner ears of embryonic mice. Hereditary hearing loss accounts for about half of all congenital hearing loss cases, and this work is a major contribution toward research that targets the embryonic inner ear.

In human hereditary hearing loss, deafness has already occurred by birth. It is therefore considered that treatment during the fetal stage would be most effective. The GJB6 gene encodes the CONNEXIN 30 protein, which is essential in hearing development, and a deficiency of the gene results in the second most common disease among cases of hereditary hearing loss that have no other disease in the inner ear.

In previous work, Dr. Ryosei Minoda, head of the Department of Otolaryngology at Kumamoto General Hospital, reported that hearing loss was restored by gene therapy to the inner ear of Connexin 30 deficient fetal mice. The current research team, which includes Dr. Minoda and Dr. Hiroki Takeda of Kumamoto University, and several researchers from Keio University, have successfully grafted human iPS-derived cells into the inner ear of embryonic mice, a feat with a high level of technical difficulty.

[Method and Results]
First, the research team succeeded in efficiently inducing inner ear cells expressing inner ear specific proteins, such as CONNEXIN 26, CONNEXIN 30, and PENDRIN, from human iPS cells. They then transplanted progenitors of the inner ear cells into the inner ear of embryonic normal and Connexin 30 knockout mice using glass tubes with optimized tip sizes. The transplanted cells grafted to various sites throughout the inner ear in both groups. However, the Connexin 30 knockout mice had more grafted cells than the normal mice, and some of the grafted cells were found to express CONNEXIN 30.

Furthermore, this study revealed that cells derived from humans can be grafted into the heterozygous inner ear of mouse embryos. This adds the possibility of in vivo experiments on therapeutic effects using human-derived cells in the mouse embryo. It is thought that this line of research can greatly contribute to the development of a fundamental treatment for hereditary hearing loss and inner ear development research.

This research result was posted online in the journal "Scientific Reports" on 31st January 2018. 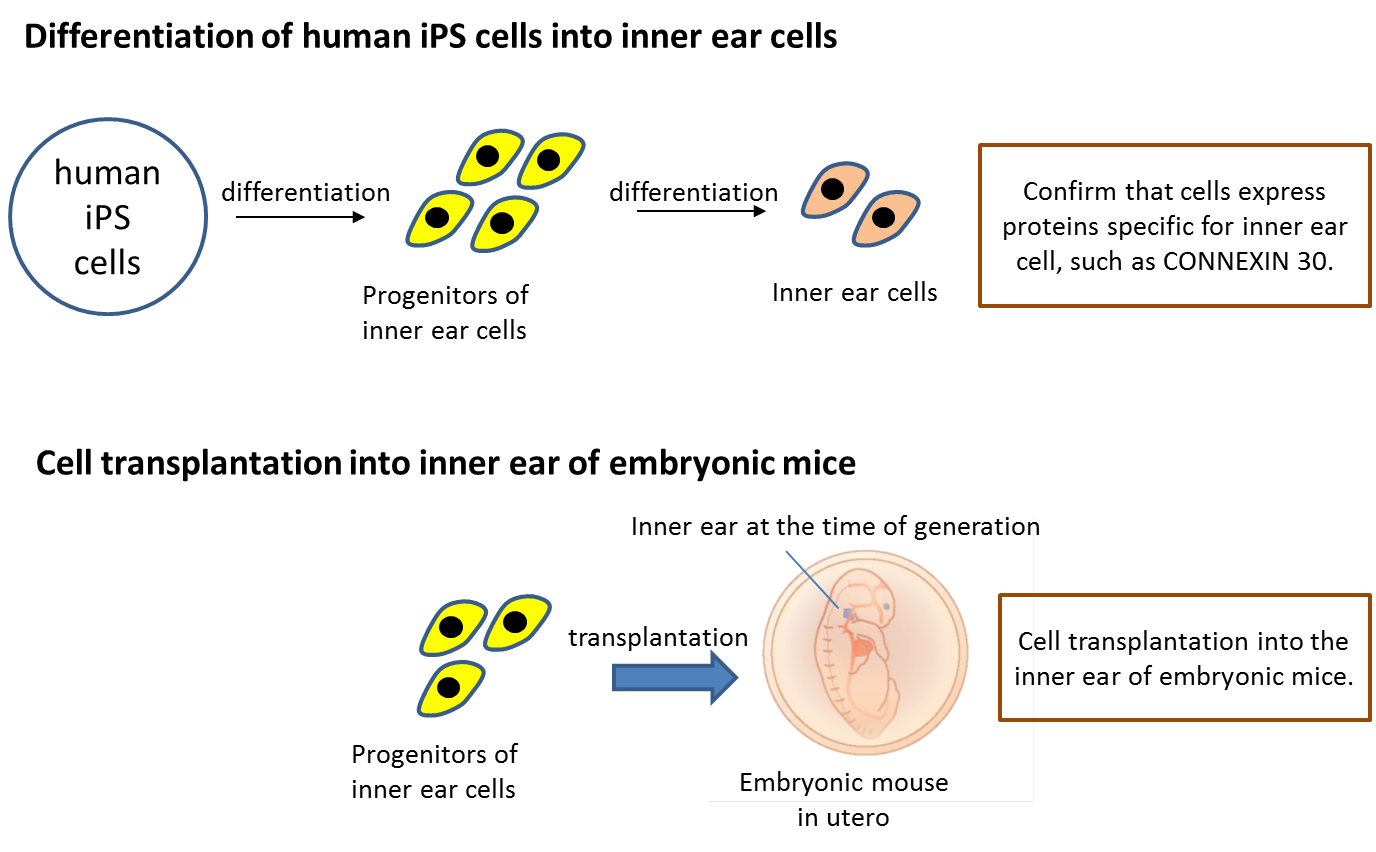 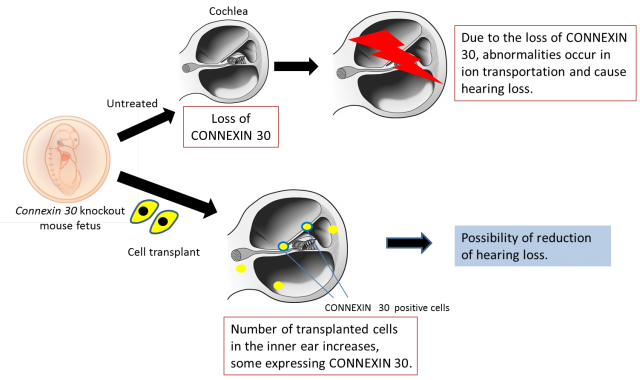 CAPTION:
Gene knockout mice lacking the CONNEXIN 30 protein experience hearing loss due to sensory cells dysfunction as the ion potential of the sensory cells inside the inner ear decreases after birth. In this study, human iPS cells-derived cells were transplanted into Connexin 30 knockout mice during the embryonic stage. The transplanted cells were engrafted in the treated inner ear and some cells began expressing CONNEXIN 30 after seven days had passed.


[Image Details]
CREDIT: Dr. Takeda, et al. Scientific Reports 2018
USAGE RESTRICTIONS: These images may only be used in conjunction with the accompanying release, or stories written about the work described in the release with reference to the original work.