Researchers from Kumamoto University, Japan have succeeded in producing a mouse model that faithfully reproduces the pathologies of two intractable lung diseases, chronic obstructive pulmonary disease (COPD) and cystic fibrosis (CF). Experiments using this new research model revealed that two pathogenic pathways, oxidative stress and protease-antiprotease imbalance, matched those found in human COPD and CF. It is a major achievement that could lead to the development of new medication therapies.

COPD is a disease in which bronchial or lung inflammation is caused by harmful substances such as tobacco smoke or air pollution. Symptoms include difficult breathing (dyspnea) in daily life, chronic cough with sputum, and fatigue when going up and down stairs. Smoking is considered to be the cause of the disease for a large proportion (more than 90%) of patients, and the number of patients contracting COPD is steadily increasing due to the difficulty most people have in trying to stop smoking. Three million people worldwide die from COPD each year accounting for 6% of all deaths. On the other hand, CF is a genetic disorder that, like COPD, mainly affects the respiratory system, however it is characterized by a thickening of mucus that clogs the lungs and increases vulnerability to lung infection. A significant number of patients with CF die from lung related problems. CF also affects the digestive system and those with the disease often experience nutritional problems.

Current treatments for COPD are bronchodilators and steroids, but these are symptomatic treatments, not curative therapies. Similarly, CF has no cure, and is usually treated with antibiotics. Although development of new therapeutic agents based on the mechanisms of the diseases was desired, it was at a bottleneck since no mouse model existed that faithfully reproduced the symptoms of COPD or CF found in humans. In particular, researchers sought the development of an animal model that caused excessive mucus to accumulate in the bronchi leading to an increase in sputum.

Kumamoto University researchers focused on the epithelial Na channel (ENaC), a protein that controls the water content in the lungs and regulates mucus, and began developing a transgenic (C57BL/6J-ENaC-Tg) mouse that expressed ENaC specifically in pulmonary epithelium. It should be noted that other research groups already produced mice with different genetic backgrounds overexpressing ENaC in the lungs, but the mortality rate was very high.

"Since previous mouse models have thus far only been produced by a limited number of studies, and had mortality rates that were quite high, we changed the genetic background of the ENaC-Tg mice using a ‘backcross’ method; a method that results in offspring that more closely resemble the parent genetically. We then tested for specific molecules and pathways that lead to disease development in the mouse model," said Associate Professor Shuto at Kumamoto University, who led the research. "As a result, we succeeded in establishing a new COPD/CF mouse model that faithfully reproduces the symptoms of the human diseases but with mortality significantly improved. Our model includes retention of mucus in the bronchus, reduction of lung function, pulmonary emphysema, and pulmonary inflammation."

The expression of 272 genes was found to be altered after a comprehensive gene analysis of the mouse lung tissue RNA. Furthermore, several of the gene groups that were reported to have elevated expression in human COPD/CF were found in the mouse model. Notably, an increase in oxidative stress and an activation of protease (proteolytic enzyme) activities, which are typical of the pathology of human COPD/CF, were also seen in the molecular pathology of the mice.

In human COPD/CF, there are reports that existing antioxidants such as N-acetylcysteine (NAC) and vitamin C (VC) are useful. Administering NAC to model mice alleviated emphysema symptoms and improved respiratory function. Also, symptoms worsened in the mouse model in which VC was genetically prevented from being produced, reinforcing the utility of both antioxidants against COPD/CF.

Furthermore, the administration of the drug ONO-3403, which strongly suppresses the serine proteolytic enzyme, affected the expression of about 70% (186 genes out of 263) of the genes possessed by this mouse model. In other words, disease progression is significantly suppressed by ONO-3403. Additionally, the researchers were able to show that compounds related to ONO-3403 are also useful as novel and radical COPD therapies.

"The ENaC protein activated in this animal model is also over-activated in the lungs of patients with cystic fibrosis (CF), which is an extremely frequent genetic disease in Europe and the United States," added Associate Professor Shuto. "Development of this mouse model provides useful information not only for COPD/CF, but also for understanding other intractable pulmonary diseases and their drug treatment."

This finding was first reported in "Scientific Reports" on December 16th, 2016. 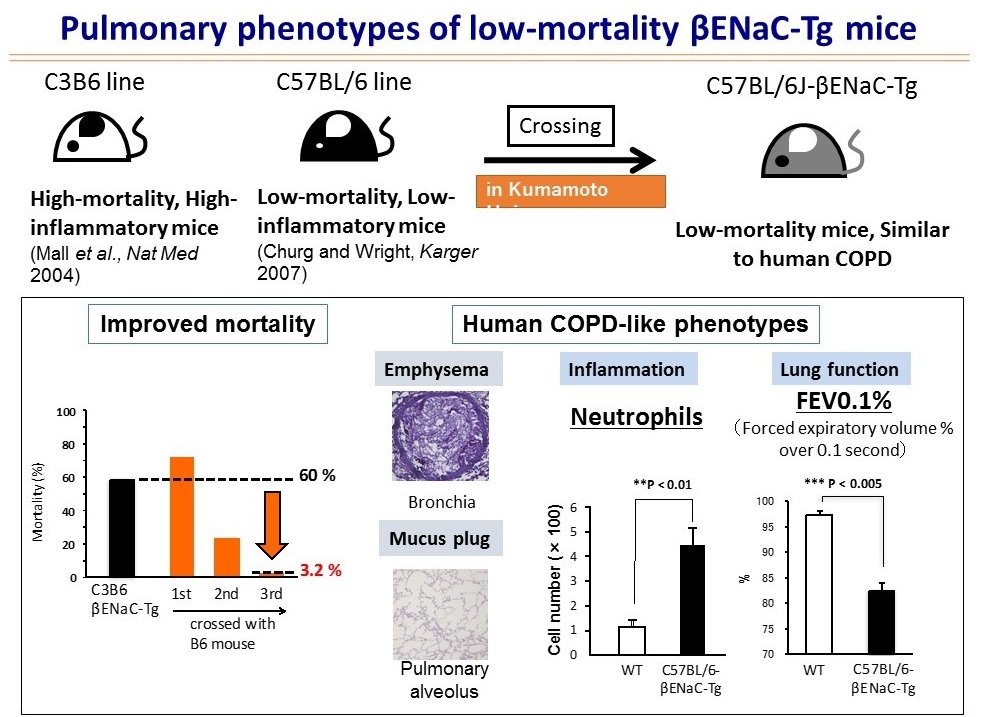 Pulmonary phenotypes of low-mortality mice
Crossing of C3B6 and C57BL/6 mouse lines results in low-mortality βENaC-Tg mice. A multifaceted evaluation of the pulmonary pathology shows the new mouse line to have various obstructive pulmonary disease symptoms, such as high mucus retention. The FEV% over 0.1s is a meaningful parameter since a similar measure, FEV% over 1.0s, is used to assess disease progression in humans.
Adapted from Shuto, et al., 2016 (http://www.nature.com/articles/srep39305) 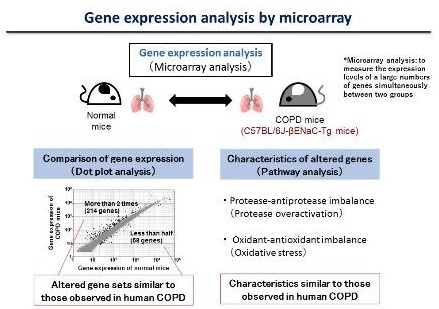 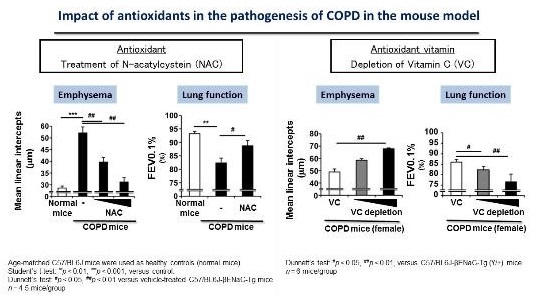 Antioxidant impact on COPD in a mouse model
In an analysis performed on a new mouse model for COPD by researchers of Kumamoto University (Japan), antioxidants were found to have a positive effect on pulmonary emphysema and lung dysfunction.
Adapted from Shuto, et al., 2016 (http://www.nature.com/articles/srep39305)


CREDIT: Associate Professor Tsuyoshi Shuto
USAGE RESTRICTIONS: This image may only be used in conjunction with the accompanying release, or stories written about the work described in the release with reference to the original work.