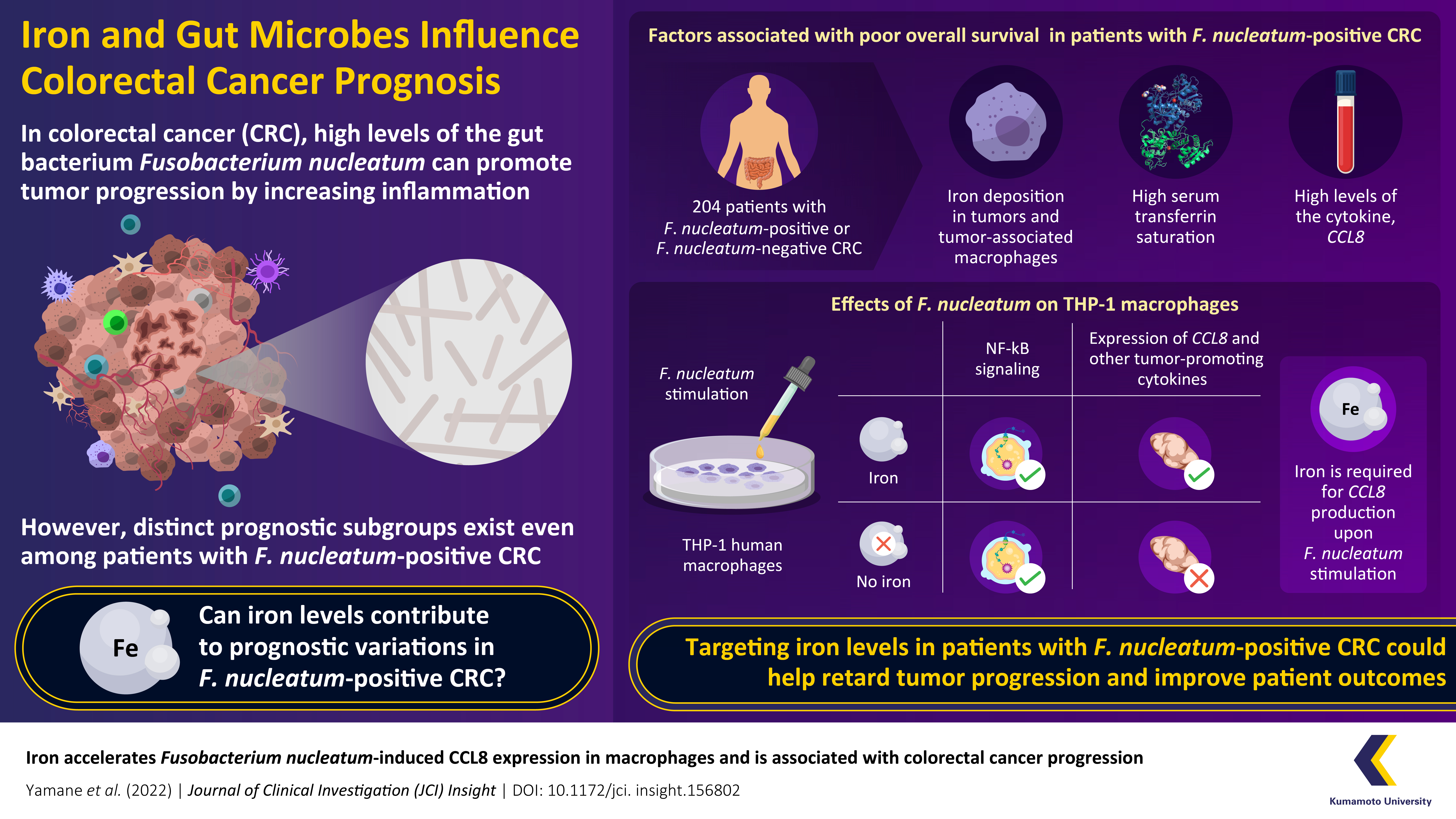 Colorectal cancer (CRC) is the second-leading cause of cancer-related deaths around the world. Recent studies have indicated that high levels of intestinal microbes such as Fusobacterium nucleatum in colorectal tumor tissues could lead to a poor prognosis in patients with CRC. However, factors associated with differences in prognosis among patients with F. nucleatum-positive CRC have so far remained unclear. As a result, targeted interventions against these tumors have remained limited. A possible answer could lie in the body’s iron levels, which often determine how the immune system responds to infections.

To explore the mechanisms contributing to tumor progression in CRC and identify case-specific signatures, especially in the context of F. nucleatum-positive CRC, researchers from Kumamoto University and Gifu Pharmaceutical University in Japan investigated the relationship between tumor progression and the body’s iron levels in samples of F. nucleatum-positive CRC. Their study, recently published in the volume 7 of the Journal of Clinical Investigation (JCI) Insight, revealed that excessive iron accumulation accelerates tumor progression in F. nucleatum-positive colorectal cancer. “Focusing on the fact that CRC patients with high systemic iron levels show poor survival rates, we clarified the mechanism through which excess iron accelerates the progression of cancer,” says Kumamoto University’s Prof. Toshiro Moroishi, who led the study along with his university colleagues Prof. Hideo Baba, Prof. Tomohiro Sawa, and Prof. Yoshihiro Komohara.

A healthy adult body contains about 3–5 g of iron, equivalent to the amount of iron present in an iron nail. While iron deficiency causes diseases such as anemia, excess iron has often been associated with diseases such as cancer. The researchers were inspired by their previous findings, which revealed that a disruption of iron homeostasis can alter tissue functions in the body. Hence, to uncover the link between iron levels and CRC prognosis, they analyzed tumor tissue specimens from 204 patients diagnosed with stage I, II, or III F. nucleatum-positive or F. nucleatum-negative CRC. Simultaneously, the iron levels in the tumor tissues were also examined, along with the patients’ serum levels of “transferrin saturation” — an indicator of systemic iron status. This first round of experiments revealed that both high levels of transferrin saturation and iron deposits within the tumor were associated with a worse overall survival (OS) in patients with F. nucleatum-positive CRC.

The rest of their study was geared towards understanding how iron affects CRC prognosis. One common link between iron metabolism and cancer progression is the modulation of immune responses, which are mediated by immune cells called macrophages that can both promote and inhibit tumors based on their molecular expression profiles. Hence, the researchers examined the effect of iron and F. nucleatum levels on the molecular expression profiles of macrophages using RNA sequencing. They performed in vitro tests in cultured cells and found that F. nucleatum infection can activate the pro-tumor TLR4/NF-κB signaling pathway in macrophages, thus increasing the production of CCL8 — a protein that promotes tumor growth and progression. Together, the results showed that in F. nucleatum-positive CRC, the bacteria transform macrophages into pro-tumor cells expressing CCL8.

The role of iron in this process, however, remained unclear. To find the final piece of this puzzle, the researchers tested how changes in iron levels affect the increase in CCL8 caused by F. nucleatum. Explains Prof. Moroishi, “In other words, we asked if F. nucleatum can still induce CCL8 expression in macrophages if iron is absent.” Interestingly, the answer was that it couldn’t. When iron was removed, the production of CCL8 and other pro-tumor signaling molecules in macrophages was reduced considerably, meaning that they could no longer promote tumor development. This result explained why patients with F. nucleatum-positive CRC and lower levels of iron showed a better prognosis than their counterparts with high iron levels.

“Our research group has clarified that the combination of F. nucleatum infection and high levels of iron in the body accelerates the progression of CRC,” confirms Prof. Moroishi. “This means that by targeting iron levels, survival rates could potentially be improved in this patient group,” he adds. His research team intends to continue exploring the dynamics of iron metabolism in the body in the context of cancer. Their findings are expected to open new avenues of precision-based preventive strategies and customized therapeutic approaches for patients with CRC.

[Funding]
About Professor Toshiro Moroishi
Prof. Toshiro Moroishi is a Professor at the Department of Cell Signaling and Metabolic Medicine, Kumamoto University. He received his M.D. and Ph.D. in medical sciences from Kyushu University, Japan, and pursued his postdoctoral research at the University of California, San Diego, USA. His research focuses on cell signaling and cellular metabolism. Currently, his research team is exploring the molecular mechanisms of tissue homeostasis and pathological processes such as metabolic disorders, cancer, and immune-mediated diseases in order to provide a scientific basis for drug discovery.