The new model provides important insights that could enable advances in agriculture, epidemiology, and printing technology


Understanding liquid droplet behavior has major implications in coating industry, agriculture, and epidemiology, among others. Although well-studied and extensively researched, the mechanism of droplet splashing after impingement still remains unclear. Now, scientists from Japan and China have proposed a new model that quantitatively predicts the splashing conditions in addition to the number of fingers and the size of the ejected secondary droplets for smooth and rough surfaces, deepening our insights into the phenomenon. 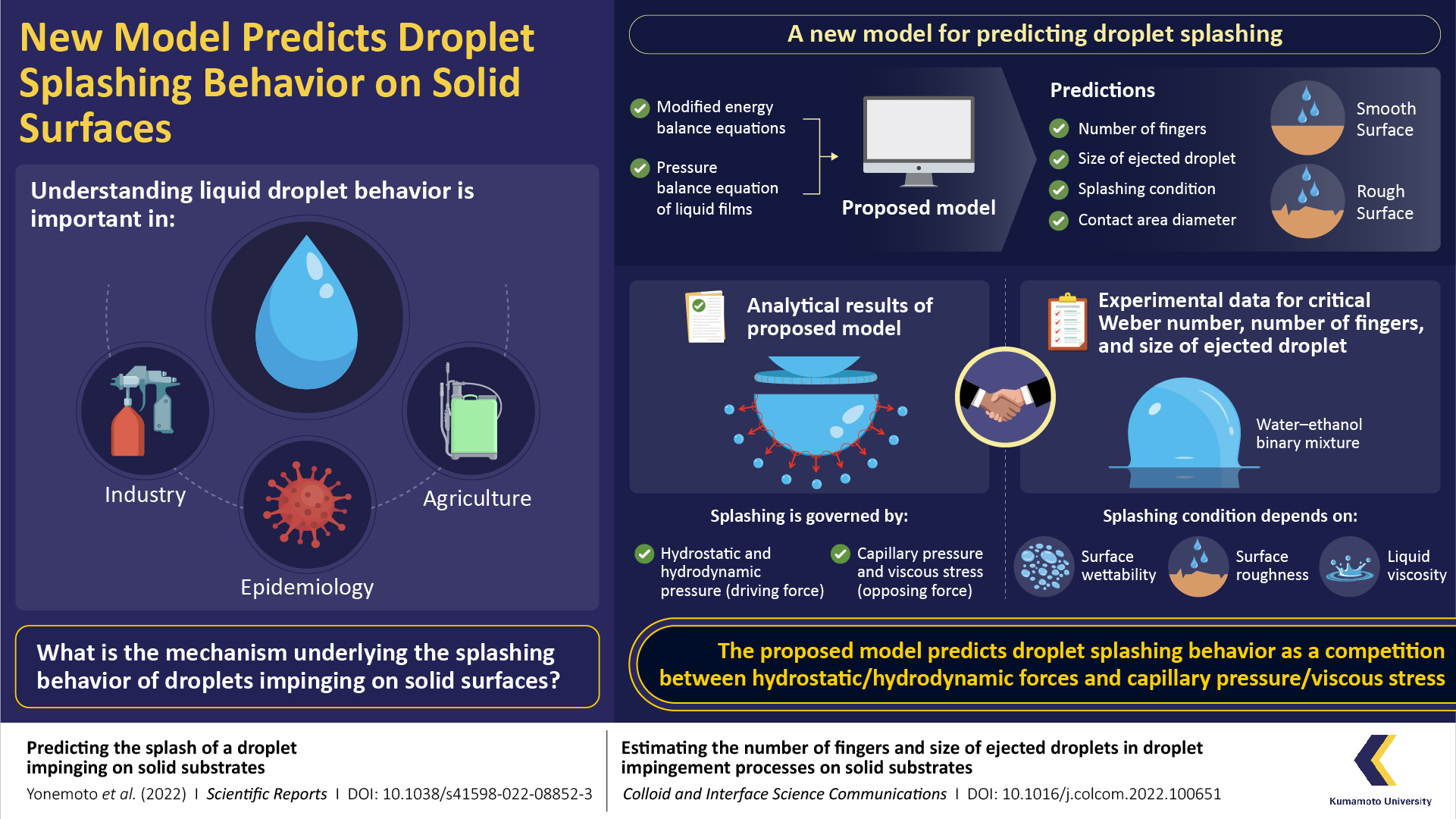 The study of liquid droplets and their behavior upon impingement is of major importance in many fields, including agriculture, engineering, and medicine. Droplet behavior prediction has use in spray painting and pesticide sprays, inkjet technology for printing, and aerosol generation during rainfall. A deeper understanding of this phenomenon is, therefore, imperative not only for advancing our knowledge of fluid physics but also technology.

In this regard, a particularly intriguing phenomenon is the splashing of droplets upon hitting solid surfaces. Several studies on liquid film behavior have helped shed light on droplet splashing. However, no consensus has emerged regarding when a droplet can be expected to splash. Moreover, wetting behavior, or the ease with which a liquid adheres to smooth and rough solid surfaces, is equally important to understand.

Against the backdrop, a group of scientists from Japan and China recently conducted a study to address this issue. The research team, led by Associate Professor Yukihiro Yonemoto from Kumamoto University, Japan in collaboration with Professor Tomoaki Kunugi from Zhejiang University, China, has proposed a new model that can predict when a droplet will splash after impinging on a solid surface. Their study was published in Volume 12 of Scientific Reports on 24 March 2022.

When a droplet collides with a solid surface, an unstable liquid film appears beneath the impinged droplet. To account for this instability, the team modified the energy balance equation that predicts the spreading contact area for smooth and rough surfaces.

To develop the theoretical model for predicting the splashing condition, the team considered the pressure balance of the liquid film. The analytical results obtained from combining the modified energy balance equation and the pressure balance equation were in good agreement with the critical Weber number (a dimensionless quantity that characterizes fluid flow on surfaces) for splashing obtained experimentally for water-ethanol mixture liquid droplets.

The results showed that the splashing condition did not depend on the viscosity of the liquid alone but also on the wettability and roughness of the solid surface. Furthermore, the splashing criterion was governed by a competition between hydrostatic and hydrodynamic pressures, which were the driving forces, and capillary pressure and viscous stress, which were the opposing forces. Splashing occurred when the driving forces won out.

In addition to predicting the splashing conditions, the splashing model also predicted the size of the scattered secondary droplets and the number of finger-like liquid structures that appeared once the liquid film destabilized. The model indicated that the thickness of the liquid film, which arose after the droplet impingement, related to the size of the secondary droplets. Further, the size of these secondary droplets and the number of fingers were mutually related. They were also affected by the wettability / surface roughness of the solid surface in addition to the liquid properties. This study was published online in Volume 50 of Colloid and Interface Science Communications on 1 August 2022.

“Our results could pave the way for a better understanding of the basic physics of rim or liquid film fragmentation as well as find applications in important engineering fields related to printing, coating, and spraying,” comments Dr. Yonemoto.

And it may happen soon!


About Associate Professor Yukihiro Yonemoto
Yukihiro Yonemoto is currently an Associate Professor in the Division of Industrial Fundamentals at the Faculty of Advanced Science and Technology at Kumamoto University, Japan. He received his master’s degree in Engineering from Kyushu University, Japan and Ph.D. in Engineering from Kyoto University, Japan in 2008. His research interests lie in the fields of thin liquid films and microstructures on materials. His current research focuses on understanding the wetting phenomena between solid and liquid which is important in the fields of coating and imprinting technologies. He has published 88 papers with 292 citations to his credit.