A research collaboration based in Kumamoto University, Japan has revealed the DNA methylation status of gene transcriptional regulatory regions in the frontal lobes of patients with bipolar disorder (BD). The regions with altered DNA methylation status were significantly enriched in genomic regions which were reported to be genetically related to BD. These findings are expected to advance the understanding of the pathogenesis of BD and the development of therapeutic drugs targeting epigenetic conditions.

BD is a mental disorder that affects about 1% of the population and requires long-term treatment. Epidemiological studies have suggested that the onset of the disease is related to a complex interaction of genetic and environmental factors. Epigenetic changes in the genome, particularly in the repression of gene expression through DNA methylation, are thought to be deeply involved in the pathogenesis of various diseases, including mental disorders.

Previous studies analyzed DNA methylation using peripheral blood and saliva samples to identify genes with altered DNA methylation and use them as biomarkers. Since mental disorders are diseases of the nervous system, research using brain tissue is particularly important. However, in addition to the scarcity of samples, brain tissue is a mixture of various cell types, such as neurons and glial cells, and is affected by differences in the ratio of cell types contained in the tissue, making accurate analysis difficult.

The researchers used neuronal nuclear markers to fractionate frontal lobe samples from 34 BD patients and 35 healthy subjects into neuronal and non-neuronal cell nuclei. Genomic DNA extracted from each of these samples was then used to examine the DNA methylation status of the regulatory regions of gene transcription using an array method. They found that many genes in both neurons and non-neurons were hypomethylated in BD patients compared to healthy subjects. On the other hand, genes important for psychiatric and neurological functions were found to be hypermethylated in neurons.

"The clarification of neuron-specific DNA methylation changes and characteristics is expected to greatly advance our understanding of the pathogenesis of bipolar disorder," said Professor Kazuya Iwamoto, who led this study. "We also expect that this will help in the development of therapeutic drugs targeting epigenetic conditions."

This research was posted online in "Molecular Psychiatry" on 20 April 2021. 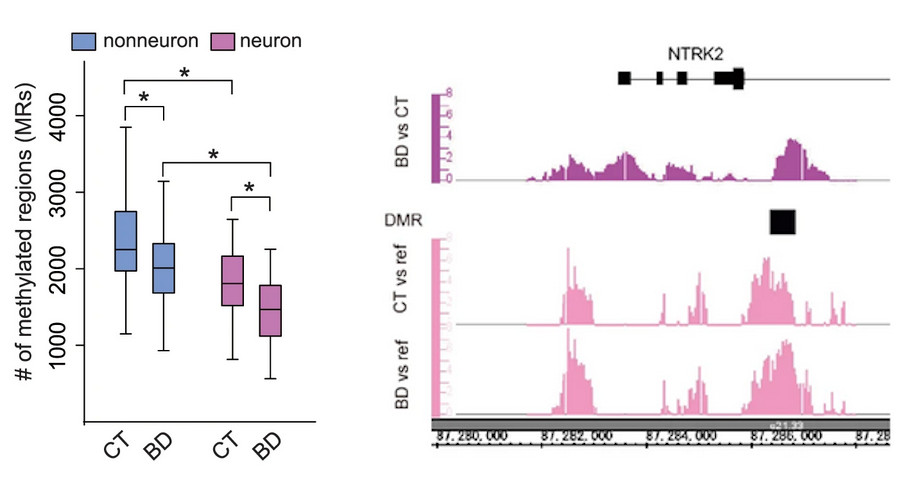 (Left) The number of hypermethylated DNA regions in both neuronal and non-neuronal cells is reduced in the bipolar patient group (BD) compared to the healthy group (CT).
(Right) Methylation status of the BDNF (brain-derived neurotrophic factor) receptor gene (NTRK2), which is important for mental and neurological functions. The upper panel shows the hypermethylated region in patients, and the lower panel shows the DNA methylation status in patients and healthy controls.

[Usage Restrictions]
Left: Fig. 1(b), Right: Fig. 2(d) of Bundo, M. et.al., Molecular Psychiatry, 2021.
This image is made available under the terms of CC by 4.0. Any further distribution of this work must follow the terms of this license.

Researchers performed random sampling of the same number of gene transcriptional control regions in the genome that showed DNA methylation variation 10,000 times to determine the number of matches with GWAS regions for bipolar disorder, major depression and schizophrenia, and to obtain p-values for the measured values (obs). A significant accumulation was found in the GWAS for bipolar disorder, while no significant accumulation was found for major depression or schizophrenia.

[Usage Restrictions]
From Fig. 4(c) – column 1, rows 4, 1, & 2 respectively of Bundo, M. et.al., Molecular Psychiatry, 2021.
This image is made available under the terms of CC by 4.0. Any further distribution of this work must follow the terms of this license.