Expectations for the development of therapies targeting KDM5A

An international team of researchers from Japan, the US and the UK has analyzed the function of the histone demethylase KDM5A in multiple myeloma, one of the three major hematological cancers, and clarified the mechanism by which it promotes myeloma cell proliferation. They also developed a novel KDM5 inhibitor and showed that it inhibits cancer cell growth in a myeloma mouse model. The researchers expect that new therapies targeting KDM5A will be developed in the future.

The prognosis for multiple myeloma is improving every year with the introduction of new therapeutic agents, but there is still no cure. Further elucidation of the pathogenesis of this cancer and the development of therapeutic agents are required. The molecular pathogenesis of cancers, including multiple myeloma, is deeply related not only to genetic alterations but also to epigenetic changes. The epigenetic regulator KDM5 family proteins are highly expressed in myeloma cells, but their function is not clear.

To clarify the role of KDM5 family proteins in myeloma cells, researchers from Kumamoto University and the Dana-Farber Cancer Institute used genetic manipulation to suppress the expression of KDM5 in human myeloma cell lines. They found that among KDM5 family members, KDM5A in particular had a strong effect on cell proliferation which prompted them to analyze its molecular mechanisms. They also developed a novel KDM5 inhibitor and validated its efficacy using both myeloma patient cells and myeloma mouse models.

Genetic suppression of KDM5A expression or pharmacological inhibition of KDM5 inhibited the growth of myeloma cells. Furthermore, by using myeloma mouse models in which a human myeloma cell line was transplanted into immunodeficient mice, the researchers demonstrated that their KDM5 inhibitor suppresses myeloma cell growth even in vivo. Functional analysis revealed that KDM5A cooperates with MYC, an important transcription factor in myeloma development and growth, to promote the expression of MYC target genes. Although a high level of histone methylation (H3K4me3) was originally observed near the transcription start site of MYC target genes, this modification level was further increased by repressing KDM5A. This indicates that excess H3K4me3 acts as a barrier to transcription thereby inhibiting transcription contrary to previous theories that H3K4me3 promoted transcription. Further analysis suggested that KDM5A helps switch transcription-associated complexes as they proceed from transcription initiation to transcription elongation by transiently releasing H3K4me3.

This study proposed a new model of epigenetic regulation in which KDM5A regulates histone methylation at the transcription start site to optimal levels during the required phase, thereby promoting the transcription of MYC target genes and leading myeloma cells to proliferation. It also showed that KDM5 inhibitor inhibits the growth of myeloma cells.

"Our research has elucidated part of the mechanism of myeloma cell proliferation mediated by histone modification regulation, and has shown the potential for therapies targeting KDM5A," said Associate Professor Hiroto Ohguchi, who led this study. "It is also becoming clear that the KDM5 family is involved in the growth of other carcinomas. The problem with the KDM5 inhibitors so far is that they have weak cell membrane permeability and are not effective in cells or in vivo. However, if a therapeutic drug is developed based on the KDM5 inhibitor developed in this study, it is expected to develop into a new therapeutic strategy for not only multiple myeloma but also various other types of cancer by combining it with conventional treatment methods."

This research was posted online in Blood Cancer Discovery on 10 April 2021. 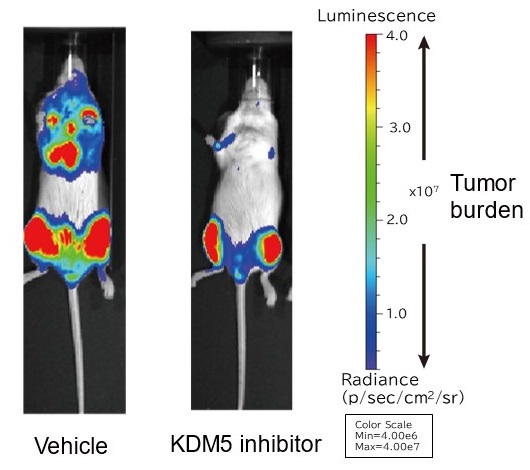 The ability of myeloma cells to proliferate was tested in a myeloma mouse model. Results show that the KDM5 inhibitor impaired myeloma cell proliferation.

[USAGE RESTRICTIONS]
To use this media elsewhere, the authors request a reference to the original work (this release) be included. 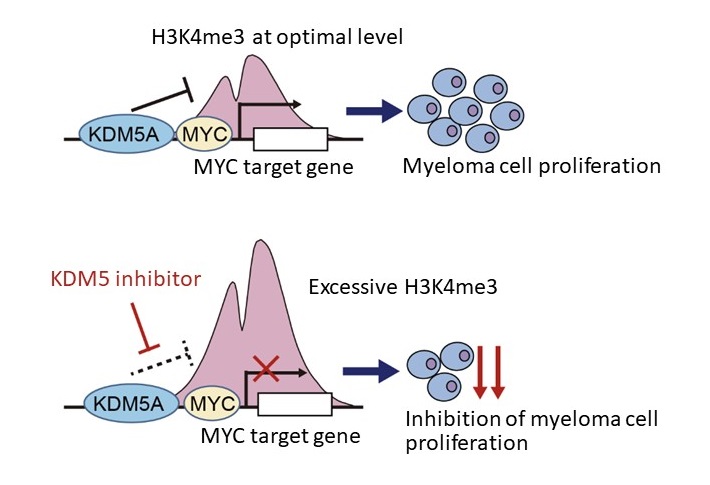 [USAGE RESTRICTIONS]
To use this media elsewhere, the authors request a reference to the original work (this release) be included.