Researchers from Kumamoto University (Japan) have found that adult nocturnal fishflies (Neochauliodes amamioshimanus), which are typically aquatic insects, feed on pollen at night. They also present circumstantial evidence suggesting that this species not only forages in flowers, but is also a supplementary pollinator. Their work sheds light on the terrestrial life of adult fishflies, which has been a mystery until now.

Megaloptera is a small taxon (about 400 species worldwide) consisting of the families Sialidae (alderflies) and Corydalidae (dobsonflies and fishflies), and is considered to be one of the oldest groups of insects that undergo complete metamorphosis. The biology of the fishfly’s aquatic larvae, which were sometimes used as folk remedies in Japan, is relatively well understood. On the other hand, the terrestrial adults are nocturnal, and their behavior in the wild is still a mystery, including what they eat. To date, there have only been brief reports of ingestion of small insects and tree sap. In an effort to learn more about these insects, researchers at Kumamoto University conducted a three-year field study of adult fishflies, which are endemic to Amami Oshima Island in southern Japan.

Dusted yellow
In July 2018, researchers noticed a fine yellow powder covering the front (including the head, pronotum, and legs) of an adult fishfly that flew into a light. A closer examination using scanning electron microscopy revealed that it was pollen from the Iju tree (Schima wallichii ssp. noronhae), a tall tree in the Camelliaceae family. Of the 18 adults (4♂ & 14♀) surveyed between July 2018 and July 2019, 14 (1♂, 13♀) had pollen on them. These included all individuals (1♂, 6♀) found resting on the underside of leaves and walls during the day. The researchers believe that this is because the adults of the species do not use their legs to groom their body surface.

Not just smelling the flowers
In June and July of 2020, researchers collected and examined excrement from 46 adults (17♂, 29♀). Samples from 36 insects (12♂, 24♀) contained Iju pollen, with 7 (3♂, 4♀) having particularly large amounts. This indicates that fishfly adults ingest pollen when visiting flowers. Since captive adults of several fishfly species have been reported to consume liquid nourishment (e.g., sugar water), the researchers speculated that they likely consume the nectar near the base of flower stamens.

Smorgasbord
A total of 27 adults were found in the vicinity of flowering Iju trees on seven nights in June and July 2020, and individual flower visits were confirmed seven times. The insects would stick their heads into the center of the flower, where numerous stamens are densely arranged in a ring, then change positions and do it again resulting in a long stay per flower. One individual spent about 3 minutes on one flower and another spent a total of 11 minutes on two adjacent flowers.

The researchers thus concluded that both sexes of the adult Amami fishfly—named after the island where the study was conducted—have a habit of visiting flowers and feeding on pollen (and nectar). It has long been suggested that some species of diurnal Sialidae visit flowers to forage, but this has never been demonstrated, and no such species is known in the Corydalidae family. This study is the first demonstration in nature that some Megaloptera species are pollen-eaters and have flower-visiting habits.

The fishfly genus, Neochauliodes, consists of 46 species, including the Amami fishfly, and are found in the tropical and temperate zones of Asia. In addition, about 20 species of Iju trees (Schima spp) grow over a large area that overlaps the fishfly habitats. Considering this, it is likely that the pollen feeding behavior is not unique to the Amami fishfly, and may be found in other species of the same genus in other regions. The researchers hope that this work will lead to a gradual elucidation of the terrestrial life of adult fishflies, especially their relationship with plants.

Amami Oshima Island, along with several other islands in the Nansei (Ryukyu) Island chain, is currently a World Natural Heritage Candidate Site recommended by the Japanese government.
"Although the relationship between the fishfly and flowering plants revealed in this study is only a small part of the symbiotic network between the plant and animal species on Amami Oshima Island, it is a case that reminds us, once again, of the great inherent value of biodiversity," said Associate Professor Naoto Sugiura of Kumamoto University, who led this study. "There are few reports of adult aquatic insects functioning as pollinators, and it would be meaningful to clarify whether this species is indeed a pollinator of the Iju tree in the future. If this can be demonstrated, it will be an interesting case study of the clear symbiotic relationship between both aquatic and terrestrial ecosystems."

This research was posted in Entomological Science on 8 February 2021. 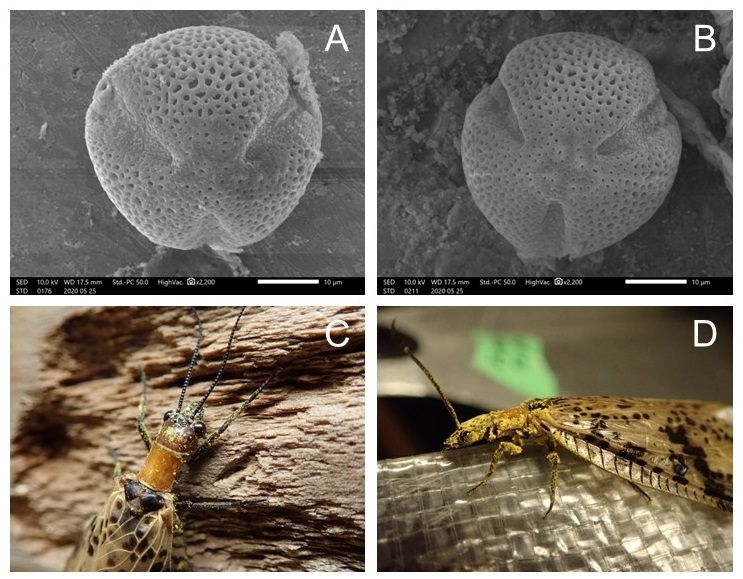 USAGE RESTRICTIONS:
Fig. 1 of Sugiura, N., & Miyazaki, S., Entomological Science, 2021.
This image is made available under the terms of CC BY 4.0. Any further distribution of this work must follow the terms of this license. 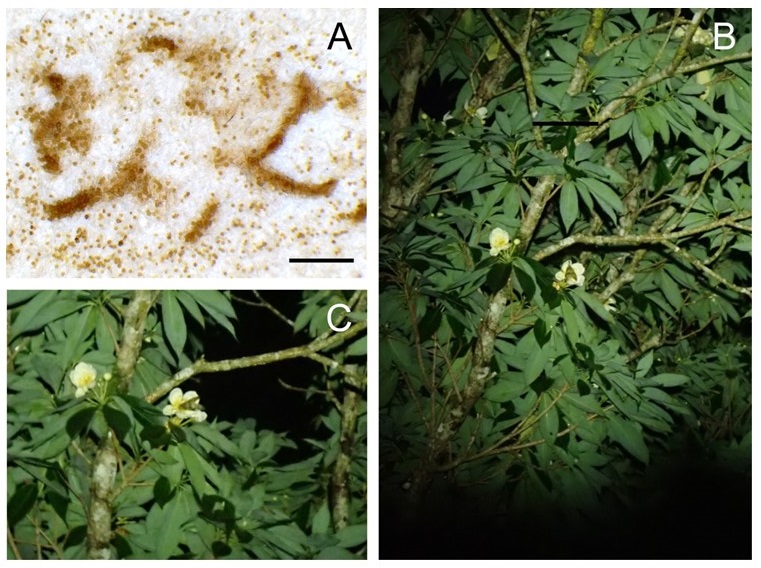 A) A large amount of Iju tree pollen found in the dried excrement of an Amami fishfly.
B) & C) Amami fishflies collecting pollen from Iju flowers.

USAGE RESTRICTIONS:
Fig. 2 of Sugiura, N., & Miyazaki, S., Entomological Science, 2021.
This image is made available under the terms of CC BY 4.0. Any further distribution of this work must follow the terms of this license.