Researchers from Kumamoto University (Japan) have found that the anti-diabetic drug metformin significantly prolongs the survival of mice in a model that simulates the pathology of non-diabetic chronic kidney disease (ND-CKD) by ameliorating pathological conditions like reduced kidney function, glomerular damage, inflammation and fibrosis. Metformin’s mechanism is different from existing therapeutics which only treat symptoms, such as the blood pressure drug losartan, so the researchers believe that a combination of these medications at low dose will be highly beneficial.

CKD (chronic kidney disease) is a general term for kidney damage that results from persistent decline in kidney function due to proteinuria, kidney inflammation, or fibrosis. As CKD progresses, patients are forced to undergo dialysis, and diabetes is one of its biggest risk factors. CKD can also occur in association with lifestyle-related conditions such as hypertension, insufficient exercise, smoking, hyperuricemia, and mutations in kidney-related genes. This type of CKD is classified as non-diabetic chronic kidney disease (ND-CKD) and has limited treatment options.

Alport syndrome is an inherited kidney disease that falls under the ND-CKD umbrella. In Alport syndrome, abnormalities in type 4 collagen, a constituent of the membrane responsible for urine filtration in the kidney, cause abnormal glomerular filtration which results in chronic loss of kidney function. It is a serious disease that eventually progresses to end-stage renal failure, requiring dialysis or kidney transplant. As with diabetic kidney disease and ND-CKD, Alport syndrome is currently treated by maintaining kidney function using blood pressure-lowering drugs but patients eventually transition to end-stage renal failure. Therefore, a new therapeutic agent that is effective and safe enough to be administered to patients for a long period of time is needed.

Metformin is used as a treatment for type 2 diabetes because it improves insulin sensitivity. It is an inexpensive and safe drug that has been used by diabetics for many years. Interestingly, because of its mechanism of action, metformin was also known to be protective against many diseases involving inflammation and fibrosis, and was known to improve the renal pathology of diabetic kidney disease. However, it was unclear whether metformin also had a protective effect on ND-CKD, which is not caused by diabetes.

Administration of metformin or losartan to ND-CKD model mice significantly suppressed proteinuria and serum creatinine, which are indicators of CKD. Inflammation and fibrosis, which also reduce kidney function, significantly improved. Furthermore, metformin was found to have a nephroprotective effect similar to losartan.

The results of a detailed gene expression analysis found that the renal pathology of the ND-CKD mouse model was caused by abnormal expression of genes related to glomerular epithelial cell podocytes (cells responsible for kidney filtering) and genes involved in intracellular metabolism. Interestingly, the improvement caused by losartan was limited to genes involved in podocyte abnormalities. Metformin, on the other hand, improved the expression of genes related to podocyte abnormalities and those related to intracellular metabolism. In other words, metformin clearly has a different target of action (also improved targeting of metabolic abnormalities) from that of losartan.

Finally, they found that administration of low-dose metformin and losartan to model mice significantly prolonged their survival. Researchers also found that in studies using doses at which metformin alone was not effective, the combination of metformin and losartan significantly prolonged mice survival. Put plainly, this study showed that an appropriate combination of the two therapeutic drugs could effectively treat the ND-CKD (Alport syndrome) mouse model.

This study raises the possibility that metformin, a proven and inexpensive diabetic drug, may delay the progression of kidney pathology in ND-CKD, including Alport syndrome. Metformin is currently available for use in patients with diabetes in clinical practice, but not in non-diabetic patients.

"This study appears to show that metformin has therapeutic effects for both diabetic and non-diabetic kidney disease," said Professor Hirofumi Kai, who led the research project. “However, metformin is contraindicated in patients with severe renal dysfunction (eGFR < 30) due to the development of lactic acidosis as a side effect and should be administered with caution to patients with mild to moderate renal dysfunction.”

This research found that the appropriate combination of metformin and losartan significantly improved renal pathology and prolonged survival in a ND-CKD mouse model. This suggests that the old inexpensive drug metformin could become a new inexpensive drug for patients with chronic kidney disease.

This research was posted online in "Scientific Reports" on 29 March 2021. 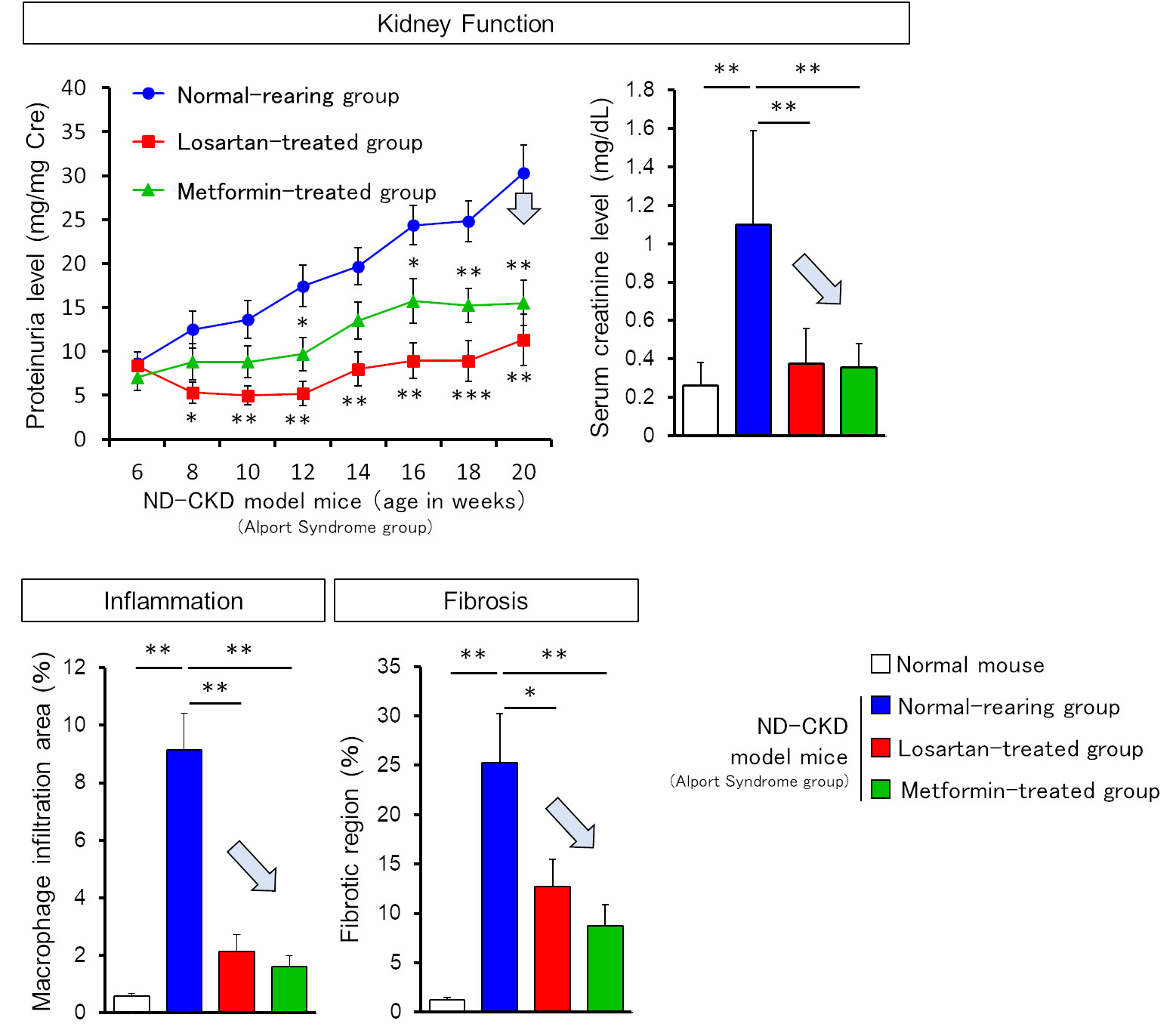 USAGE RESTRICTIONS:
Adapted from Figs. 1b & 1d (top) and Figs. 2d & 2c (bottom) of Omachi, K. et.al., Scientific Reports, 2021.
This image is made available under the terms of CC by 4.0. Any further distribution of this work must follow the terms of this license. 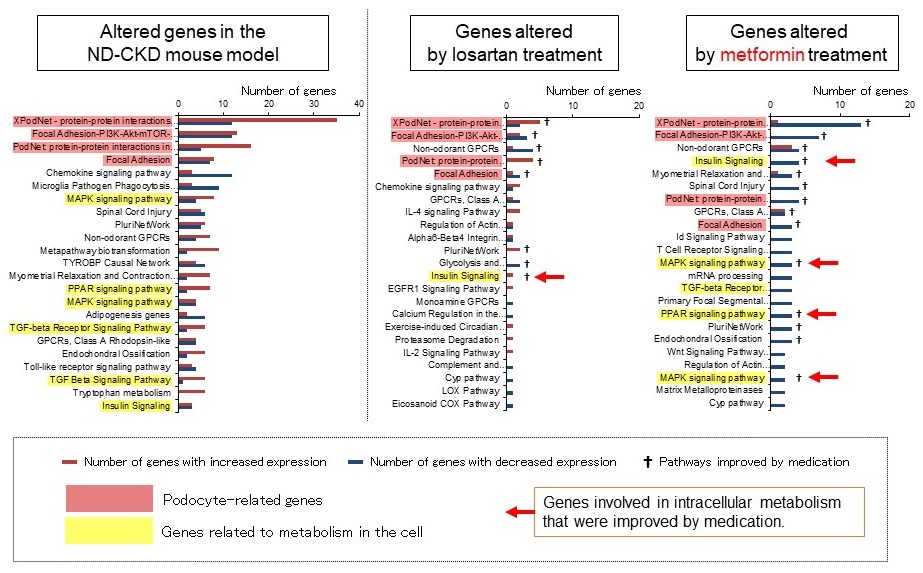 USAGE RESTRICTIONS:
Adapted from Fig. 5(b, c, d) of Omachi, K. et.al., Scientific Reports, 2021.
This image is made available under the terms of CC by 4.0. Any further distribution of this work must follow the terms of this license. 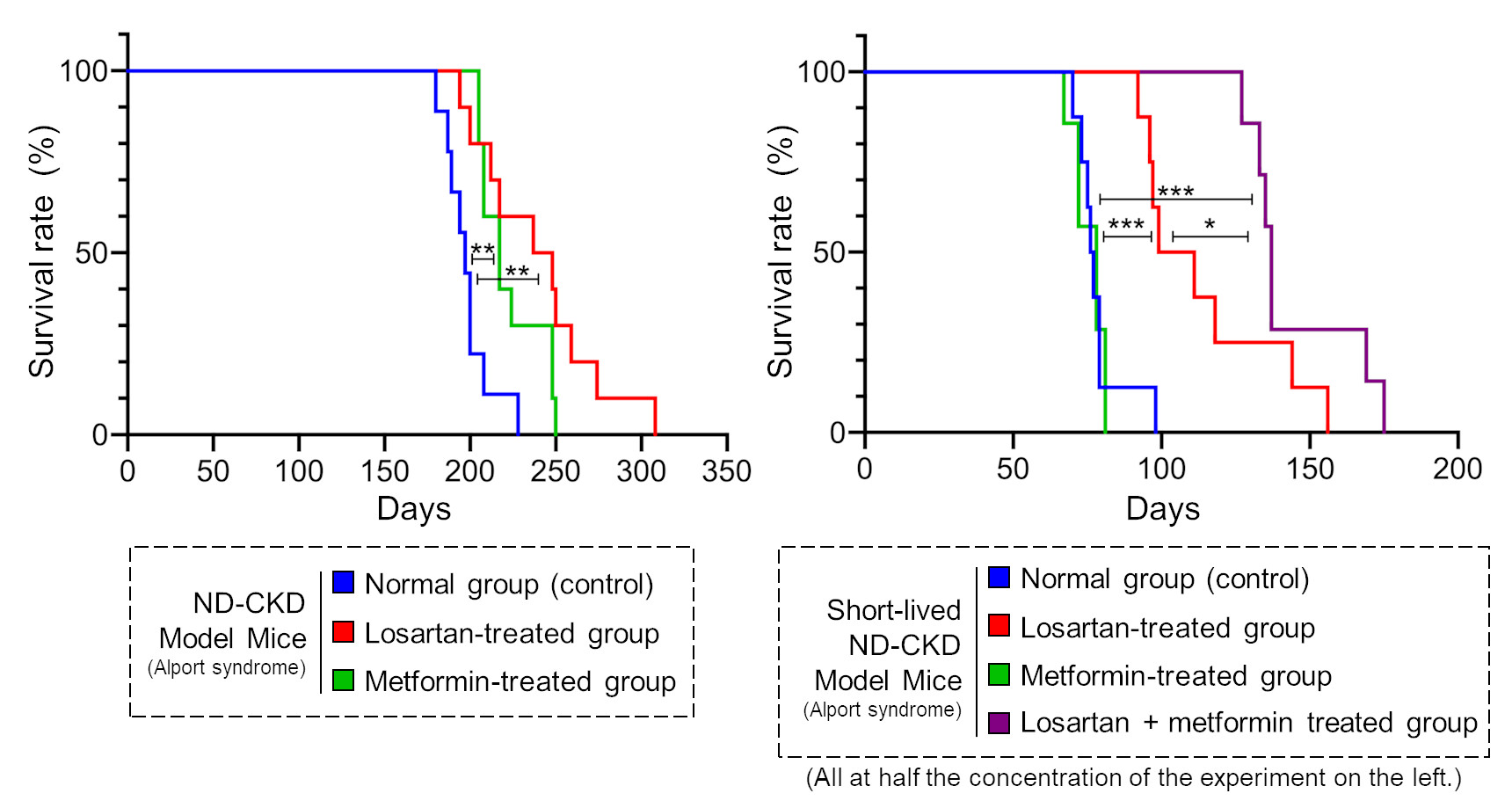 Title: Metformin prolongs survival in a ND-CKD (Alport syndrome) mouse model, and is enhanced when combined with losartan
Caption: Left: Administration of metformin or losartan to model mice significantly prolonged survival.
Right: Combined administration of low dose metformin and losartan significantly prolonged the survival of mice at doses where metformin alone does not show any effect.

USAGE RESTRICTIONS:
Adapted from Fig. 7 of Omachi, K. et.al., Scientific Reports, 2021.
This image is made available under the terms of CC by 4.0. Any further distribution of this work must follow the terms of this license.