A mathematician’s journey in Edo Japan

Researchers from Kumamoto University (Japan) have discovered two primary historical documents showing that Mitsuyoshi Yoshida, author of the popular Edo-period Japanese arithmetic book "Jinkouki," was invited by the Kumamoto clan to stay in Kumamoto (from Kyoto) between 1636 and 1637. At that time, the Kumamoto clan had a lot of construction work to do, including castle restoration and levee building, and Yoshida possessed cutting-edge knowledge of arithmetic systems, civil engineering, and hydraulic technologies. These documents provide important clues into the society of the early Edo period.

When the abacus (invented around the 14th century) was imported from China, it quickly spread across Japan. As the textbook covering its use and the arithmetic skills needed for daily life and business, Jinkouki is said to have greatly contributed to the use of the abacus in Japan. After the first edition was published in 1627, many revised editions and similar books were published. The textbook was widely used by both experts and the general public.

Mathematician Mitsuyoshi Yoshida came from a family that earned a lot of wealth through finance in Kyoto and overseas trade, and contributed to civil engineering projects such as river improvement and canal development. Mitsuyoshi himself worked on the Shobutani Tunnel, a water utilization facility in Kyoto. However, much of what is known about him today is based on hearsay so specific details about his life remain unknown. When he was invited to Kumamoto, the local government was busy with the restoration of Kumamoto Castle, levee construction, and large-scale arable land development.

The first of the two historical documents was signed by four “sobugyo” (chief magistrates) from Kumamoto. The four addressees were the officials in charge of rice, finances, and expenditures of the Hosokawa clan in Osaka office.

- This message is to inform you that the arithmetician Mr. Shichibei (Mitsuyoshi) Yoshida, who accompanied Lord Tadatoshi from Kyoto to Kumamoto, will now be returning to Kyoto.

- This letterbox contains a document with the Lord's approval which is to be sent to the officials in charge of expenditures in Kyoto. Please make sure it is delivered. Also, send a receipt to Kumamoto by regular delivery to confirm that you have received it.

At the end of March 1636, the feudal lord (daimyo) of the Kumamoto domain, Tadatoshi Hosokawa, was in Edo (present-day Tokyo) finishing overseeing construction of the stone walls of Edo Castle, which had begun at the New Year. He left Edo on May 13 and arrived in Kumamoto on June 9, stopping at Kyoto along the way. Since the Japanese phrase typically meaning "accompanied by" is used in the document, researchers assume that Tadatoshi himself brought Mitsuyoshi Yoshida from Kyoto to Kumamoto at that time.

This document is a copy of a letter from the Kumamoto magistrate to four officials in charge of expenditures in Osaka when Mitsuyoshi was to return to Kyoto (around July 21st) after being in Kumamoto for two months. The four men were the magistrates in Osaka who handled the finances and expenses of the Hosokawa family. This letter seems to be instructions from Kumamoto to the Osaka office, which is near Kyoto, to pay for Mitsuyoshi's transportation, food, and living expenses on his way back to Kyoto.

The second document is a copy of an order from the Imperial Magistrate's Office in Kumamoto Castle to Rokuzaemon Torii, the Hosokawa clan officer (also based in the castle) in charge of guest care.

Like last year, Mr. Shichibei (Mitsuyoshi) Yoshida will be invited to Kumamoto from Kyoto. As such, the Magistrate directs Mr. Rokuzaemon Torii to have rice provided to him from the day he arrives.

This document confirms that Shichibei (Mitsuyoshi) Yoshida was invited to Kumamoto as a guest again in 1637. These two primary historical documents prove that Mitsuyoshi stayed in Kumamoto twice, once in 1636 and again in 1637, as a guest rather than in the service of the Hosokawa family as had been previously thought.

Previously, the mathematician was only known to have stayed in the Kumamoto domain by references from later compilations and secondary historical documents; no primary historical documents had been identified to support those claims. This discovery confirms Mitsuyoshi Yoshida's stay in Kumamoto as historical fact, and that he was invited as a guest rather than in service to the Hosokawa family - an important distinction during this time in Japanese history.

At a time when the Hosokawa clan was busy with large-scale development projects, Mitsuyoshi Yoshida provided a mathematical (arithmetic) system essential for civil engineering work as well as the most advanced hydraulic engineering technology from Kyoto. This discovery of these documents confirms that large-scale infrastructure development in the early 17-century that transformed the local society, such as flood control and agricultural land development, was based on technological and cultural exchange between the central and local governments.

An article entitled by Kumamoto University’s Noriko Goto discusses the discovery of these documents was published in the February 2021 issue of Mathematical Communications, Volume 25-4 of the Journal of The Mathematical Society of Japan (Japanese only).
https://www.mathsoc.jp/publications/tushin/backnumber/index25-4.html

Eisei Bunko Research Center
"Eisei Bunko" is the name of a foundation established to retain and care for ancestral works of art, literary manuscripts, and other historical materials (ancient texts, records, illustrations, etc.) of the Hosokawa family, who were once the daimyo of Kumamoto. In 1964, several pieces from the Hosokawa Kitaoka Mansion collection in Kumamoto City were entrusted to the Kumamoto University Library. These continue to be used in educational research conducted by the University. 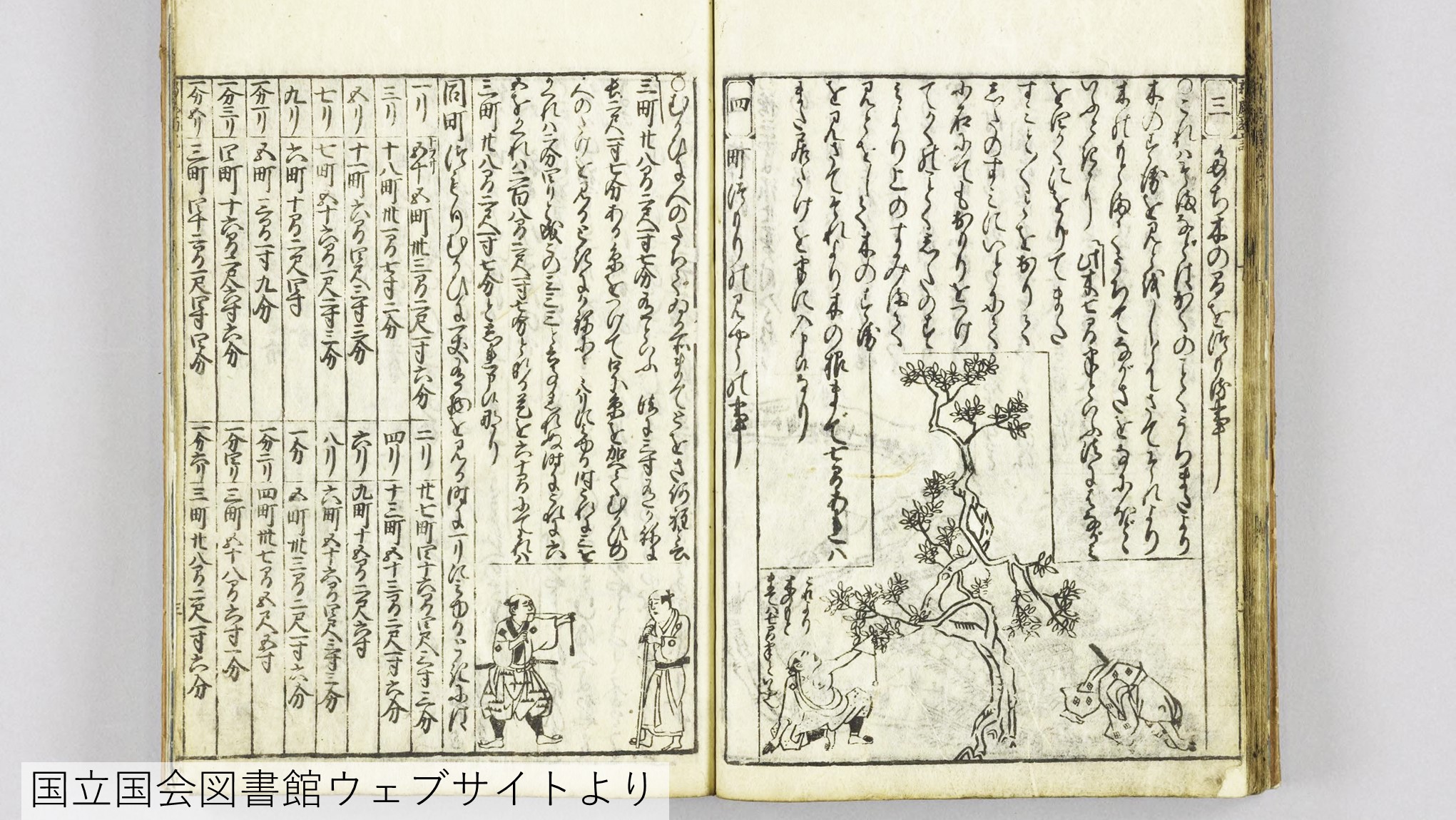 National Diet Library, Japan
The book contains a mixture of practical and amusing questions, and its many illustrations made it easy for the common people to read.
The page on the right shows how to find the height of a tree.

USAGE RESTRICTIONS:
To use this media elsewhere, the authors request a reference to the original work (this release) be included.