A joint research project between organizations in Japan and the US has demonstrated that zooplankton, a major food source for marine predators, can be located by following the concentration gradient of the chemical dimethyl sulfide (DMS) in ocean water and air. Currently, little is known about how marine predators search for and find enough food to maintain their body size. This study is expected to expand research into the chemical triggers of marine organisms while foraging.

Zooplankton, such as krill and copepods are the main energy source for many large marine animals. The big predators must consume a large amount of these tiny creatures to provide enough energy to power their enormous bodies. How they find their food is still not clearly understood.

Krill feed on phytoplankton which produce and retain water-soluble compounds in their bodies to cope with osmotic pressure. This is essential for survival in seawater. One of these compounds is dimethylsulfoniopropionate (DMSP). DMSP contains sulfur elements and is zwitterionic, meaning that it has both a positive and a negative charge like an amino acid. It is broken down by bacteria into DMS, a component of the familiar aromas associated with ocean air or dried seaweed. DMSP stored in phytoplankton is released into seawater when zooplankton graze on the phytoplankton, which is hypothesized to result in higher DMS concentrations in dense zooplankton areas. It is thought that marine predators could use DMS concentration to locate food sources. While attraction to artificially released DMS has been shown in some predatory species, whether natural gradients of DMS are used by predators and serve as a useful foraging cue remains unknown.

To investigate the phenomenon, an international team of researchers from Kumamoto University and Woods Hole Oceanographic Institution developed a new instrument to continuously and automatically analyze seawater and atmospheric concentrations of DMS.  Together with a researcher from Stony Brook University, they then used the device to conduct a survey in June 2019 off the coast of Cape Cod, Massachusetts, a summer feeding grounds for many baleen whale species. Researchers took chemical measurements, recorded zooplankton and fish biomass, and whale locations over a series of transects across the ocean surface.

"We plan to expand this research project in the future to investigate the relationship between DMS and predation by measuring the concentration of the chemical alongside marine predator movement trajectories," said Professor Kei Toda, who led the chemical measurements. "We also plan to explore other attractant chemicals and study their relationship with the behavior of marine predators like whales, seabirds and penguins. A pilot study tagging humpback whales to examine their movements in relation to DMS was conducted in Antarctica in February 2020, but there are still some issues that need to be addressed to pursue the relationship between chemical substances and predation. We believe that we will have some interesting findings in the near future."

This research was posted online in Communications Biology on 1 February 2021.

The chemical DMSP is released when phytoplankton are consumed by zooplankton such as krill.
DMSP is decomposed into DMS.
The concentration of DMS is higher in dense zooplankton areas. There appears to be no correlation between fish biomass and DMS.
When marine predators, such as whales, move toward higher concentrations of DMS, they can reach higher densities of food (zooplankton).
DMS is also released from the ocean surface into the atmosphere. 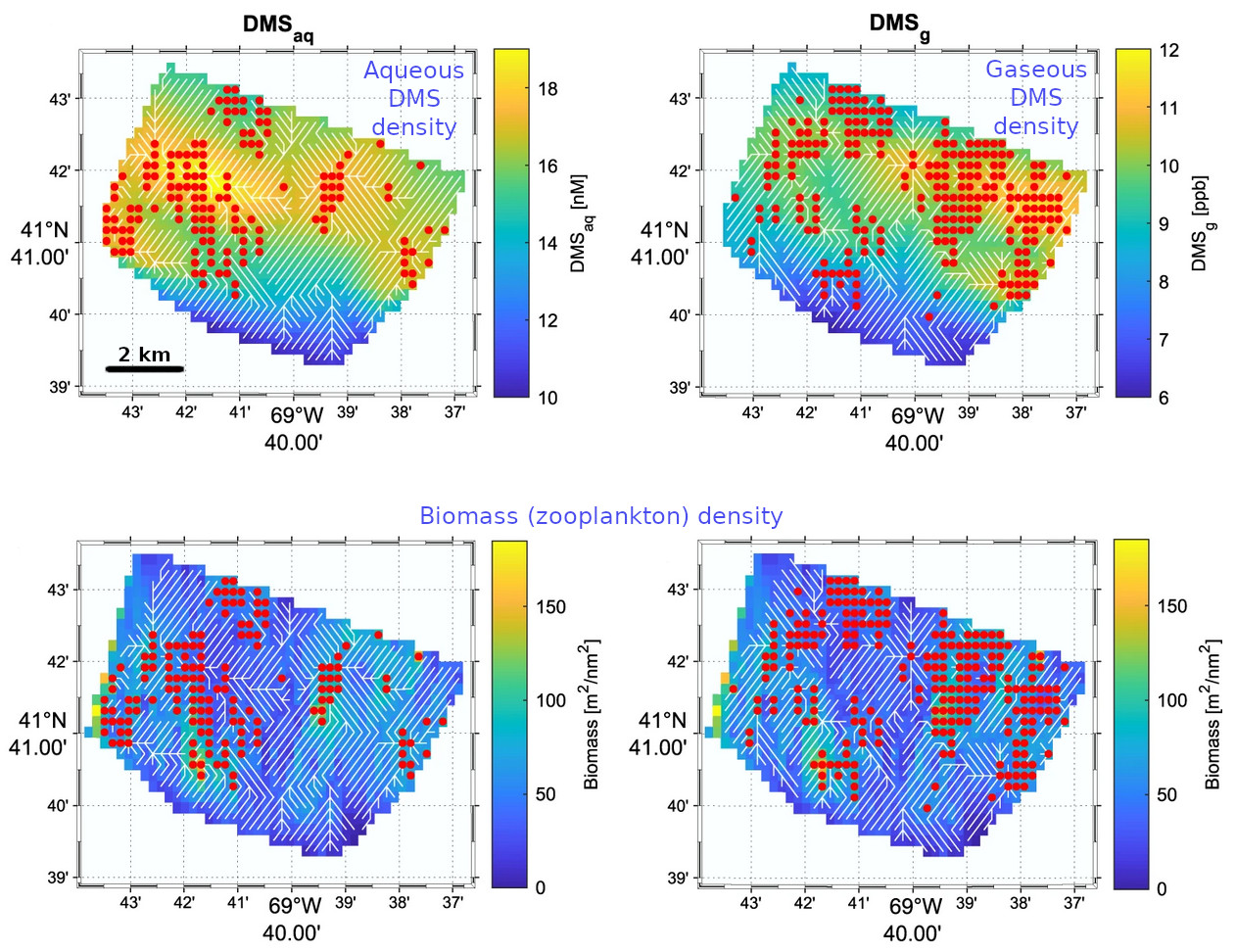 [Top] Distribution of DMS in seawater (left) and in air (right).
[Bottom] Zooplankton biomass density: The embedded white arrows indicate the direction toward high DMS density. The point with the highest density of prey along the white line is indicated by a red circle

USAGE RESTRICTIONS:
Adapted from Fig. 5(a,b,c,d) of Owen, K. et.al., Communications Biology, 2020.
This image is made available under the terms of CC by 4.0. Any further distribution of this work must follow the terms of this license. 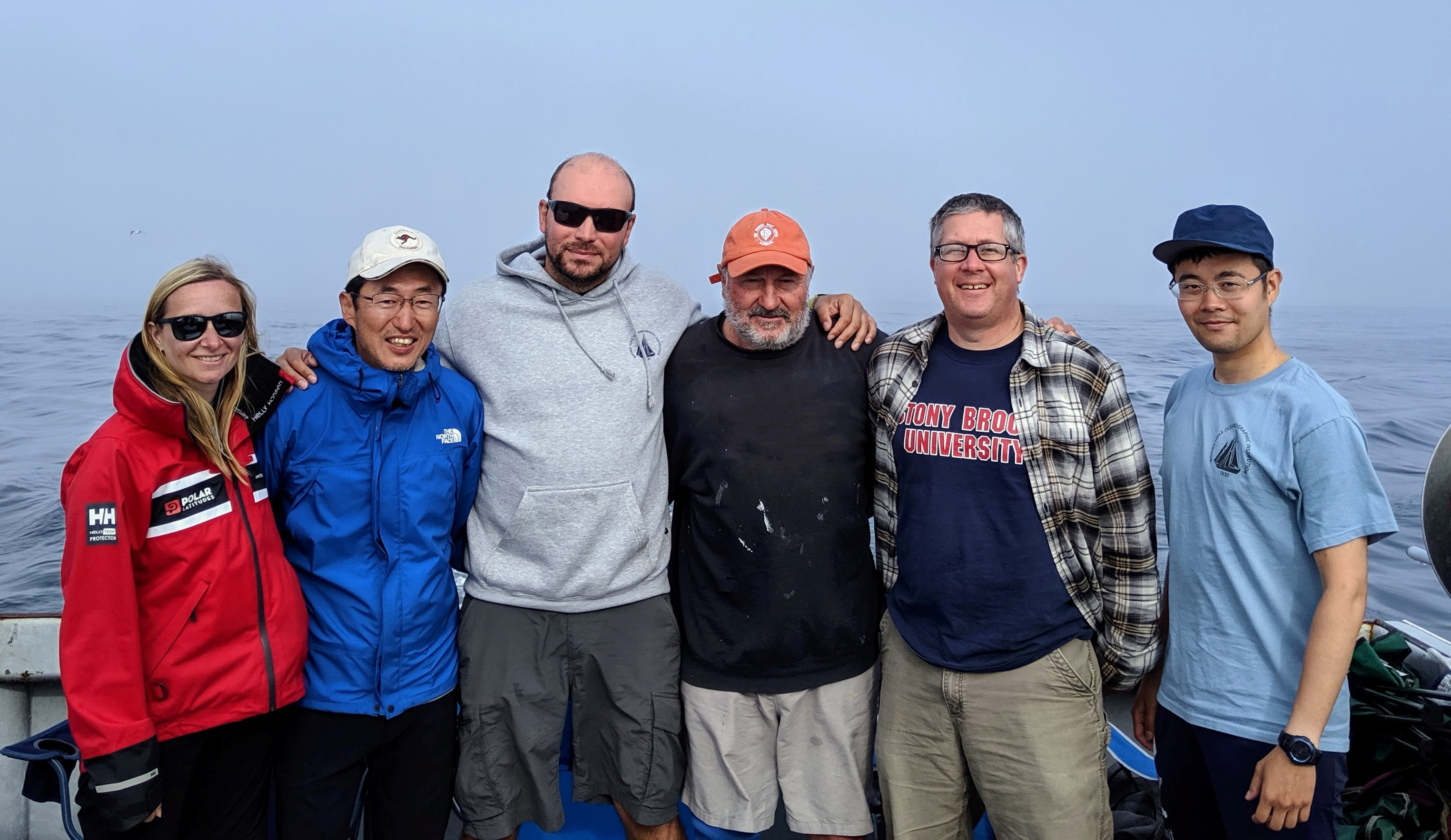