How blood and lymph vessels remain separated after development


Researchers from Kumamoto University (Japan) have clarified the mechanism by which blood and lymph vessels remain segregated from one another after development. The characteristics and structures of these two vessel types are very similar, and how they maintain separation has remained unexplained for many years. In this study, researchers found that the molecule Folliculin (FLCN) in vascular endothelial cells acts as a gatekeeper to maintain that separation.

Blood and lymphatic vessels form independent networks until the final confluence at the left and right venous angles in the neck. Blood vessels act as a pipeline that transports oxygen from the lungs to tissues throughout the body. Lymphatic vessels, on the other hand, take in tissue fluids that cannot be collected by blood vessels and act as part of the immune system. However, blood and lymph vessel characteristics and structures are very similar so how they maintain separation from each other has long been a mystery. The elucidation of this mechanism could provide the foundation for the development of novel therapeutic approaches to human lymphatic disorders. For example, the creation of a bypass (a venous-lymphatic shunt) allowing clogged lymphatic flow to return directly to veins would become an innovative therapy for postoperative lymphedema. Thus, researchers around the world have been looking into blood-lymphatic vessel separation mechanisms, but it is still not completely understood.

In this study, researchers first focused on FLCN, the causative gene of a genetic disorder with typical symptoms of multiple lung cysts, kidney cancer, and benign skin tumors (Birt-Hogg-Dube syndrome). They found that mice that were missing the Flcn gene in vascular endothelial cells had abnormal anastomosis between blood and lymph vessels that resulted in fetal death. Furthermore, even in postnatal mice with normal blood and lymphatic vessel separation, induced Flcn gene depletion in endothelial cells caused abnormal anastomosis between the two vessel types.

"These results are of great academic importance in that they have clarified a biological question that has gone unanswered for many years: Why do two very similar circulatory systems in the body, blood and lymph vessels, form and maintain independent networks? From a clinical point of view, this has the potential to provide clues on the mechanism of cancer metastasis and can potentially be developed into a treatment for lymphedema," said Associate Professor Masaya Baba, who led the study. "In cancer surgery, lymph node removal can result in serious edema in the upper and lower limbs due to decreased ability to drain lymphatic fluid. Physical therapy, elastic stockings, and lymphovenous anastomosis are listed as treatment methods, but even with skilled microsurgery techniques, it is difficult to treat sufficiently. Out of this research, we envision a future innovative treatment for lymphedema where we can pharmaceutically intervene in the signaling pathway of FLCN to artificially create a shunt that locally connects veins and lymph vessels." 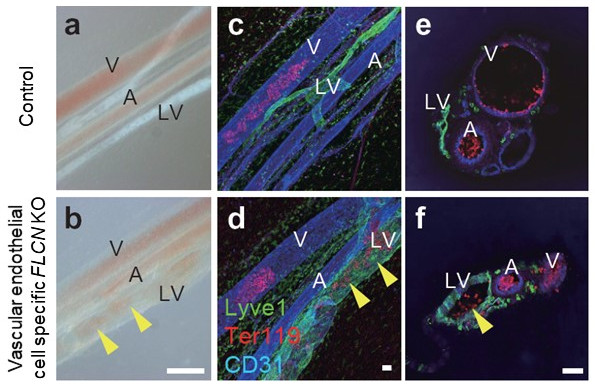 USAGE RESTRICTIONS:
Adapted from Fig. 1(s,t,u,v,w,x) of Tai-Nagara, I. et.al., Nature Communications 2020. These images have been modified for use in this press release.
This image is made available under the terms of CC by 4.0. Any further distribution of this work must follow the terms of this license.

Mechanisms that maintain the separation of blood vessels and lymph vessels

Normally, FLCN keeps the transcription factor TFE3 in the cytoplasm and suppresses the expression of Prox1 in veins. When FLCN is deleted, TFE3 migrates into the nucleus and Prox1 is expressed resulting in the appearance of venous endothelial cells that resemble lymphatic vessels. In other words, FLCN acts as a gatekeeper that regulates the plasticity of blood and lymphatic vessels, maintaining the separation between them.

USAGE RESTRICTIONS:
Adapted from Fig. 7(o) of Tai-Nagara, I. et.al., Nature Communications 2020. These images have been modified for use in this press release.
This image is made available under the terms of CC by 4.0. Any further distribution of this work must follow the terms of this license.