New technology enables the search for genes and substances that could extend healthy lifespans.


A research group from Kumamoto University (Japan) has developed an automated measurement system to assess healthy lifespans using nematodes (C. elegans). Based on qualitative differences in lifespans, this system can classify populations of nematodes that are, on average, healthy and long-lived, healthy and die prematurely, and living with long periods of poor health. Since there are many similarities between the mechanisms that determine the lifespan of C. elegans and humans, the researchers believe that this system will make it easier to develop drugs and find foods that extend the healthy lifespan of humans.

The concept of “healthy life expectancy” was proposed in the year 2000 by the World Health Organization (WHO) and is an important indicator for the health of a population. It refers to the average life expectancy minus the period of living dependent on continuous medical or nursing care. However, there is no clear scientific understanding of what constitutes a healthy lifespan in experimental animals or cells. Furthermore, the technology to objectively and rapidly analyze the factors that affect healthy life expectancy has not yet been established.

Despite being an extremely simple animal, C. elegans has differentiated organs such as nerves, skeletal muscles, and a digestive tract, and many mammalian animal-related genes are conserved. It is very useful for cutting-edge research in fields like genetics and molecular biology. However, while lifespan analysis of this nematode provides a great deal of useful information, previous lifespan studies had many limitations including 1) sensitivity to various stimuli at room temperature, 2) a long experimental time required for daily measurements, 3) a lack of objectivity due to a tendency for results to be dependent on experimental technique, and 4) the small number of samples that can be processed at one time making it unsuitable for simultaneous measurement of many samples.

The researchers attempted to resolve these issues by developing a new healthy lifespan assessment system that maintained the advantages provided by nematodes. They focused on determining the optimal conditions in a live cell imaging system for automatically measuring nematode survival, such as counting the number of nematodes in a sample, incubation temperature, medium thickness, feeding conditions, imaging interval, and survival determination method. This became C. elegans Lifespan Auto-monitoring System (C-LAS), a fully automated lifespan measurement system that can non-invasively measure a large number of samples (currently up to 36 samples). C-LAS uses overlapping images of nematodes to identify those that are moving, meaning they are alive, and those that are not moving, meaning they are dead.

Next, by using C-LAS to observe C. elegans, the researchers found that nematodes can be classified as being in one of three possible behavioral states: an active (alive) state, an inactive survival state, or an inactive (dead) state. They defined the period of active behavior as the "healthy lifespan" and established a new system that they called the C. elegans Healthspan Auto-monitoring System (C-HAS). Similar to C-LAS, C-HAS is an automated health and longevity measurement system that can distinguish between live and dead nematodes by overlapping periodic images. It is also possible to detect when nematodes are in an inactive survival state (alive but unhealthy) when they only partially overlap between images. Using C-HAS, researchers can use these parameters for mini-population analyses. This type of analysis makes it possible to divide nematodes with the same genetic background into four groups: those with an average lifespan, those that are healthy and long-lived, those that are unhealthy and die prematurely, and those that have a long period of frailty.

"It might be a little unexpected to see nematodes being used to measure healthy lifespans, but we have already used C-HAS to identify new genes related to healthy lifespan that were previously unknown," said study leader, Associate Professor Tsuyoshi Shuto. "This technology makes it possible to easily search for genes, drugs, or foods that are related to, or even extend, human healthy lifespans with a speed and accuracy that could not be obtained when using laboratory animals. We expect that C-HAS can be used for drug discovery research and in the search for healthy foods in the future. We are currently working on the development of C-HAS-AI, which will incorporate deep learning into C-HAS to boost automated analysis."

This research was posted online in the Journal of Pharmacological Sciences on 29 December 2020. 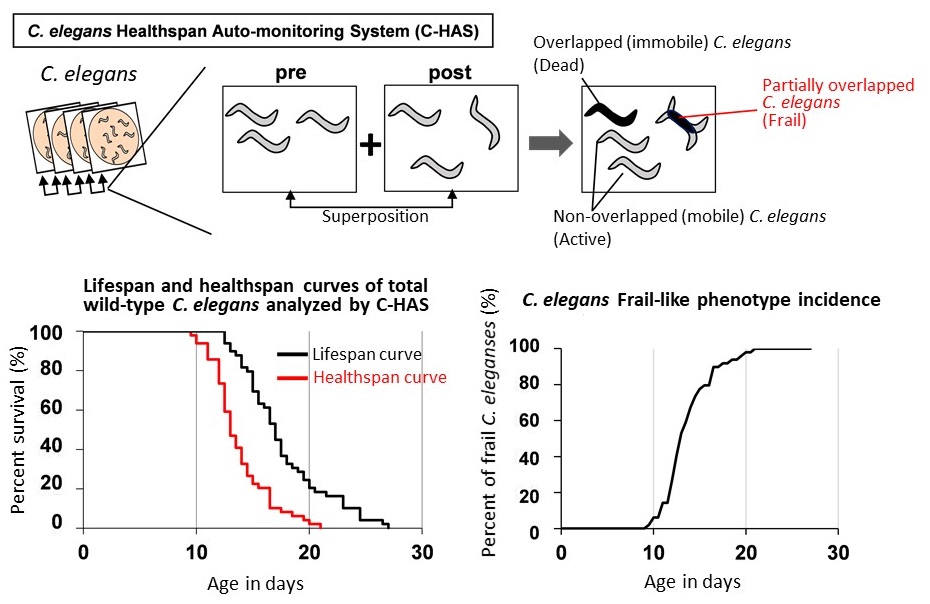 Principles of the C. elegans Healthspan Auto-monitoring System (C-HAS)
C-HAS can distinguish between nematodes that are alive, dead, or in an inactive state of survival by using superimposed periodic (before & after) images.

USAGE RESTRICTIONS:
Adapted from Fig 2(A, B, & H) of Nakano, Y. et.al. 2020.
This image is made available under the terms of CC BY-NC-ND 4.0. Any further distribution of this work must follow the terms of this license. 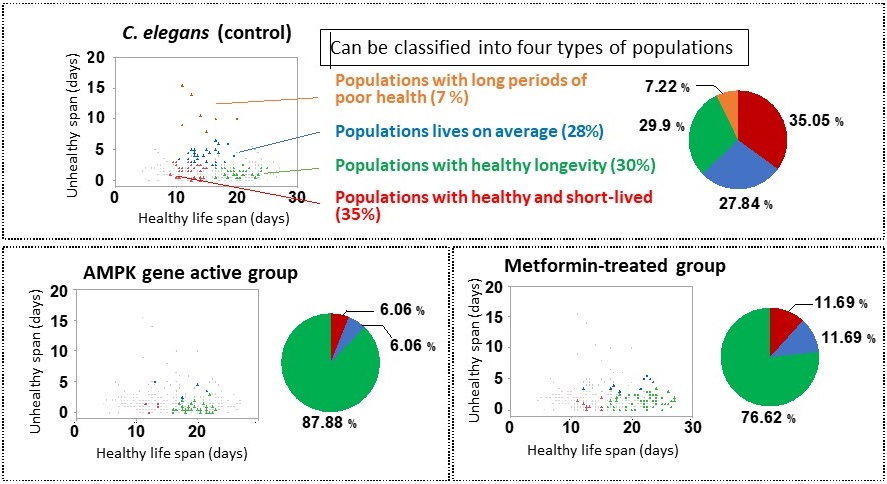 USAGE RESTRICTIONS:
Adapted from Fig 2(A, B, & H) of Nakano, Y. et.al. 2020.
This image is made available under the terms of CC BY-NC-ND 4.0. Any further distribution of this work must follow the terms of this license.