New approach for treating nephrotic syndrome is based on historic wisdom.


A research team from Kumamoto University in Japan has found that the combination of weak pulsed electrical current and heat exerts anti-inflammatory and anti-fibrotic effects in the kidneys, as well as a protective effect against nephrotic syndrome (NS) by inhibiting apoptosis (cell death) of kidney cells. Clinical data have shown that this type of physical treatment is safe and effective for humans. The researchers believe that it can be applied clinically to simultaneously target multiple NS factors.

NS is a general term for renal disease that results in the leakage of large amounts of proteins from the blood into urine due to damage to the glomerulus, the part of the kidney that is responsible for urinary filtration, resulting in complications such as hypoalbuminemia and edema. Steroids are used as a first-line treatment and have shown some efficacy, but relapses frequently occur and some types of NS are steroid-resistant. These refractory NSs remain an issue due to their poor prognosis and treatment response. In addition, NS often requires long-term control which raises concerns about the emergence of side effects caused by long-term drug use. This is why the development of new, effective and safe therapies is desired.

Electricity, thermal and other physical stimuli have been used medically for a very long time and are empirically known to ameliorate pathological conditions. Professor Hirofumi Kai and his team at Kumamoto University have been studying the usefulness of mild electrical stimulation (MES) optimized for biological activity in combination with heat shock (HS), which is intended to enhance the action of the current. So far, they have found that MES+HS effectively improves the pathology of various diseases, including type 2 diabetes (Morino, S. et al., PloS One, 2008) and psoriasis (Tsurekawa, Y. et al., Exp Derm, 2018). For type 2 diabetes in particular, clinical studies conducted on human patients showed that the treatment could correct abnormal glucose metabolism without adverse effects (Kondo, T. et al., EbioMedicine, 2014). The researchers believed that MES+HS could be a safe, novel treatment for various diseases and thus began investigating the efficacy of MES+HS on NS.

After first inducing refractory NS in a mouse model by administering the drug adriamycin (ADR), they applied 10-minute-long MES+HS treatments twice a week for four weeks and monitored the pathological changes. Renal function analysis revealed that the amount of albumin leaking into the urine increased after the disease was induced (day 7 after ADR injection) and peaked on day 10. However, in the MES+HS treatment group, urinary albumin levels were 50% and 75% lower on day 7 and day 10 respectively compared to the untreated group. MES+HS treatment also improved proteinuria scores. Furthermore, serum creatinine levels, which usually increase with NS pathogenesis, decreased by 36% and blood urea nitrogen levels decreased by 24% compared to the untreated group. These results indicate that MES+HS treatment ameliorated ADR-induced kidney dysfunction.

The researchers also analyzed renal histology. ADR injection resulted in sclerotic lesions in the glomeruli but in the MES+HS treatment group, ADR-induced sclerotic lesions were suppressed. Severe sclerotic lesions—where more than 75% of the glomerular area was sclerotic—were considerably reduced (59% decrease). An increased number of protein casts caused by ADR, which reflects NS tubular dysfunction, were also observed in the untreated group, but were reduced in the MES+HS group. This suggests that MES+HS exerts a protective effect not only on the glomeruli but also on the tubules. Researchers then evaluated glomerular epithelial cells (podocytes) since they are the starting points for the primary refractory NS disease, focal segmental glomerulosclerosis. They found that podocyte loss observed in the disease was inhibited by MES+HS treatment, which suggests that, on top of its ability to suppress renal tissue damage caused by ADR, MES+HS may also regulate podocyte reduction through some unknown mechanism(s).

To explore these mechanisms, researchers examined the impact of MES+HS on cell death in renal tissue using TUNEL staining and found that MES+HS reduced the number of apoptotic cells caused by ADR. Consistent with these results, the increase in protein expression of activated Caspase 3, an executor of apoptosis, was also suppressed by MES+HS, indicating an anti-apoptotic effect. They then focused on protein kinase B (Akt), a molecule that promotes cell survival. MES+HS was found to phosphorylate and activate Akt and deactivate its downstream apoptosis-promoting factor, BCL2-associated agonist of cell death (BAD). This was confirmed in an in vitro cell-based experimental system where treatment with a phosphorylation inhibitor of Akt (LY294002) abolished the anti-apoptotic effects of MES+HS, thus demonstrating its profound involvement in the Akt-BAD pathway.

"The physical stimulus from MES+HS has been shown by other clinical studies to be a potentially safe medical treatment for humans,” said research project leader, Professor Hirofumi Kai. “Based on the results from this work, we expect that it can be used to target multiple factors related to NS simultaneously for clinical applications in the future."

This research was published online in Scientific Reports on 30 October 2020. 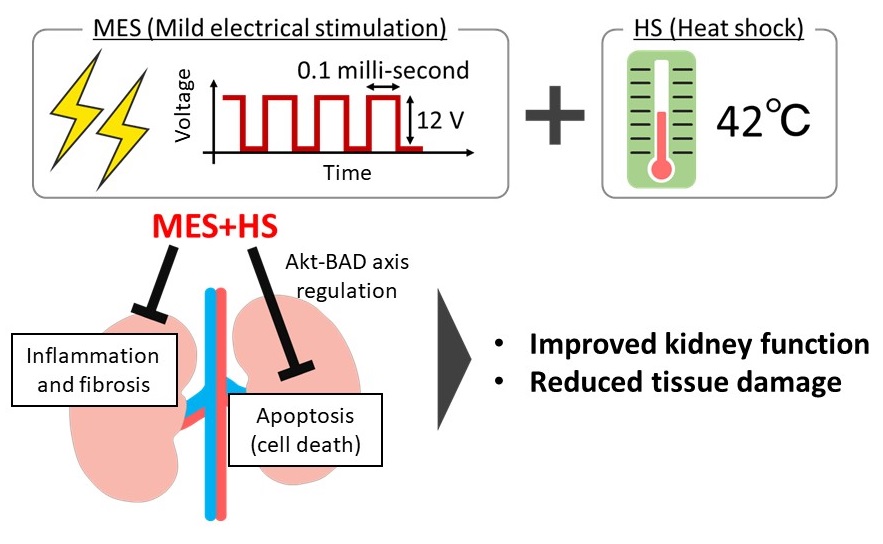 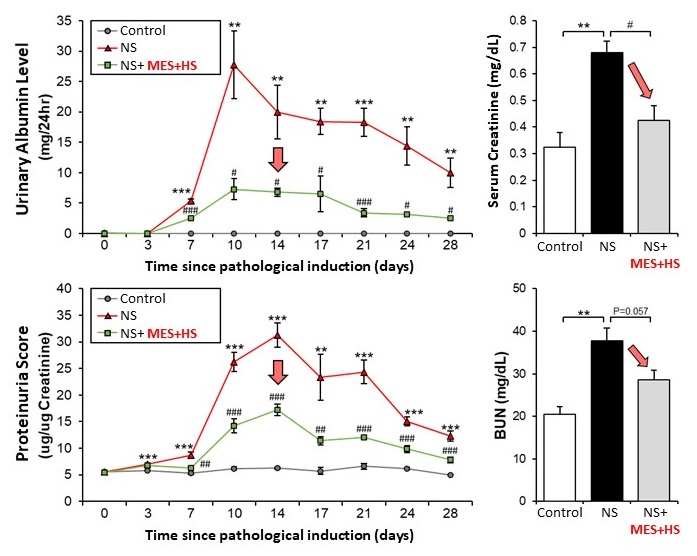 (Left) Albumin leaking into the urine of pathological model mice increased after disease induction on day 7 and peaked on day 10. In the MES+HS-treated group, urinary albumin levels decreased by 50% on day 7 and by 75% on day 10 compared to the untreated group. MES+HS also had an inhibitory effect on proteinuria scores over time.

USAGE RESTRICTIONS:
Adapted from Fig. 1 of Teramoto, K. et.al., Scientific Reports, 2020. It has been modified in part from the original.
This image is made available under the terms of CC by 4.0. Any further distribution of this work must follow the terms of this license. 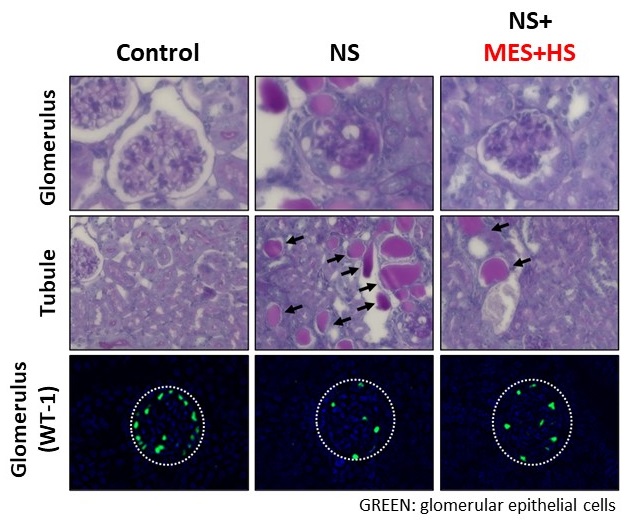 (Top row) Sclerotic lesions in the glomeruli, which play a role in the urinary filtration function of the kidney, were observed in the pathological model. However, in the MES+HS treatment group, sclerotic lesions due to ADR were suppressed.

(Middle row) An increase in the number of protein casts, reflecting tubular dysfunction, was observed In the pathological model but were reduced in the MES+HS treatment group.

USAGE RESTRICTIONS:
Adapted from Fig. 2 of Teramoto, K. et.al., Scientific Reports, 2020. It has been modified in part from the original.
This image is made available under the terms of CC by 4.0. Any further distribution of this work must follow the terms of this license.