NO DRINKING! NO FIGHTING! The laws of early Edo Japan to keep the peace

The official document details how workers should act during the reconstruction of Sunpu Castle.


An early Edo period document stipulating the Hosokawa clan code of conduct for vassals dispatched on a national project to rebuild Sunpu Castle has been discovered by Kumamoto University researchers. The thirteen articles from the head of the Hosokawa clan in the Kokura domain (area), Tadaoki Hosokawa at the time, delegate full authority to the vassals to lead construction and prevent conflicts with other clans. It is the second original code of conduct document related to the Sunpu Castle reconstruction effort to be discovered.

During the Edo period (1603-1867), the Japanese central government mobilized feudal lords from all over the country to build and repair important castles and carry out extensive infrastructure development. It is commonly believed that these national projects prevented clans from accumulating wealth by forcing them to send out materials and men, thereby establishing a system of control in the territory. Sunpu Castle, located in the center of Japan in Shizuoka Prefecture, was closely associated with the first of the Edo Shogunate (Ieyasu Tokugawa) and was an important base for the Edo Shogunate. A major expansion of the castle was delayed by a fire in December of 1607, but was quickly rebuilt by the following year. A number of daimyo clans were mobilized from all over Japan for this series of restoration projects.

The document found by researchers was issued by the head of the Hosokawa clan, Tadaoki Hosokawa, on January 8th, 1608, and outlined the Hosokawa clan code of conduct for vassals during reconstruction and their journey from Kokura (now northern Kyushu) to the Sunpu Castle reconstruction site (southwest of Tokyo). Consistent throughout this code is a strict prohibition of any action that might lead to quarrels with vassals or workers of other clans. Articles 9 and 10 delegated full authority of the renovation site to the four persons named and the superintendent in charge of the Hosokawa clan.

Article 1 instructs the entire Hosokawa workforce to follow the instructions of the superintendent, Masazumi Honda - Aide to the Shogun, in all matters of discipline. Article 2 stipulates that fighting within the clan must be strictly avoided. Those engaged in fighting, as well as those who supported them, were punished (usually by death).

Articles 3 to 5 are provisions aimed at preventing fights with other clans. Going to watch another clan’s fight was a punishable offense (Article 3). If a servant escaped to another house, he was not returned forcefully. On the other hand, those who escaped from other clans were to be returned after the completion of the project (Article 4). Lodging fees from Kokura to Sunpu were to be paid in accordance with the "Gohatto” (laws & regulations) (Article 5).

The second half of the code provides a glimpse into the life of the soldier class (ashi-garu) mobilized for the project. Alcohol (sake) was strictly prohibited. They could bring their own food (bento), but were not to drink more than three small flat sake cups (sakazuki) of alcohol (Article 6). When going to town, they were supposed to declare the nature of their errand to the magistrate and obtain a permit (Article 7). Meetings with people from other clans or the shogunate were strictly forbidden (Article 8). Hot baths in another clan's facilities were not allowed (Article 11). Sumo wrestling and spectating were strictly forbidden during the period of the project, and violators would be punished (Article 12). On the round trip between Kokura and Sunpu, workers were to travel in groups as indicated on an attached sheet (Article 13). This purpose of this historical document was to maintain peace at the project site and vividly conveys the aspects of the samurai society during its transition from a time of war to peace and prosperity.

When asked about the academic significance of this document, Professor Tsuguharu Inaba said, "This discovery provides us with a great deal of information about the politics concerning feudal lord mobilization by the shogunate to build castles.” Professor Inaba discovered the document and was part of the Eiseibunko Research Center team at Kumamoto University who deciphered it.

Until now, only two documents related to the reconstruction of Sunpu Castle were known: an original code of conduct written by Mori Terumoto, feudal lord of the Choshu clan, and another, which is a copy of the Choshu clan document, from Maeda Toshinaga, feudal lord of the Kaga clan. The discovery of this ancient document and the fact that the three documents are similar means that each clan was likely presented with a general code of conduct framework by the shogunate. Each clan then established the rules in the name of their feudal lord and required their vassals to enforce them.

The Hosokawa and Mori clans had been enemies in a major civil war (culminating in the Battle of Sekigahara) only seven years earlier and if something had sparked an old grudge, a major conflict could have evolved. The shogunate dared to mobilize the adversarial clans for the same national project to discipline them and make their joint efforts more visible. This ancient document reveals an attempt to thoroughly prevent conflicts between the clans and suggests that the shogunate was trying to eliminate the seeds of civil war by reconciling relations between clans. In other words, the government strategically implemented a national project to establish peace within Japan.

This document was made public for the first time on Nov. 4, 2020 at the Kumamoto University Library online exhibition of rare and valuable materials. 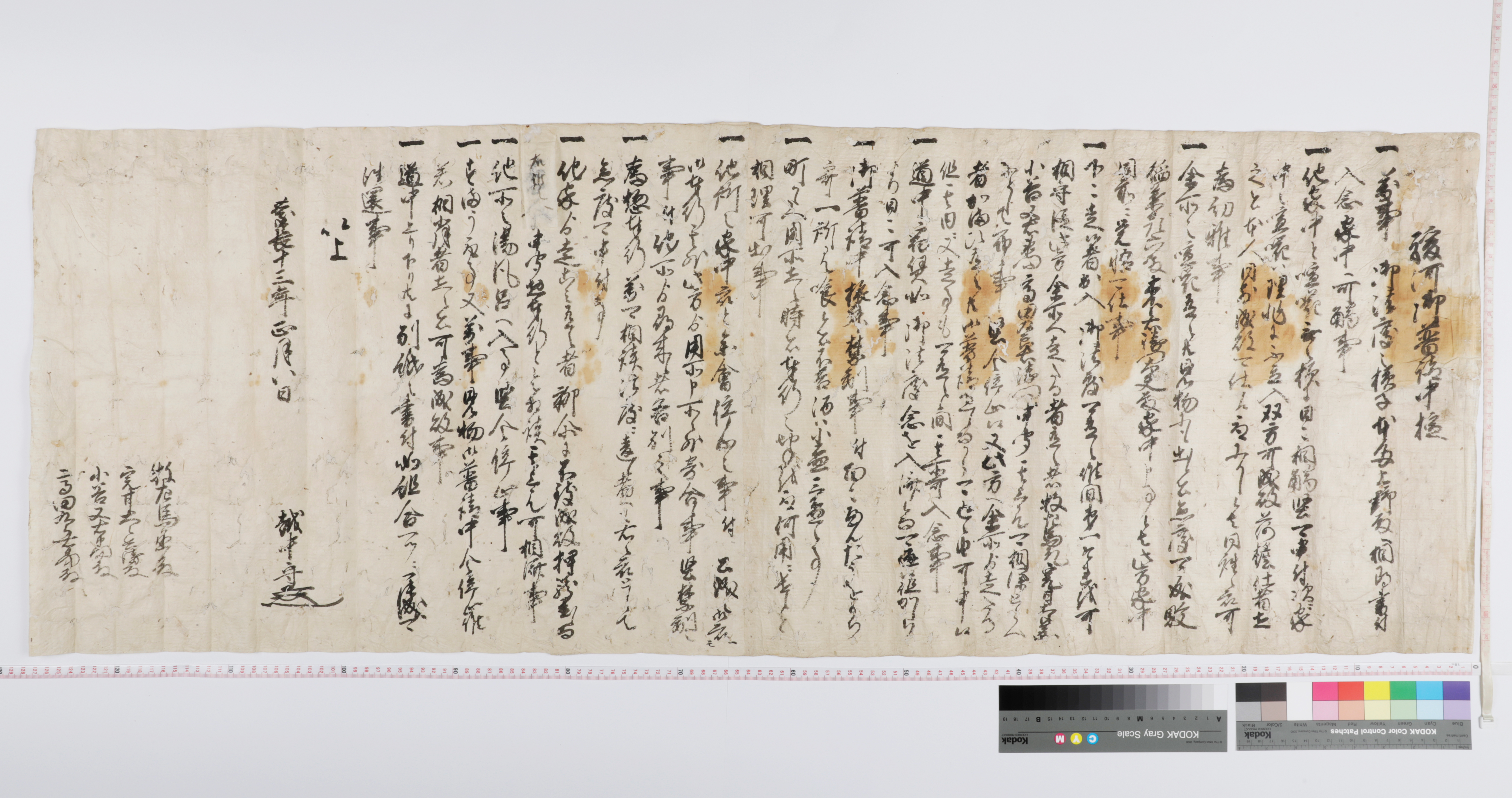 A letter from the lord of the Hosokawa clan to the four vassals in charge stating the rules to be followed. 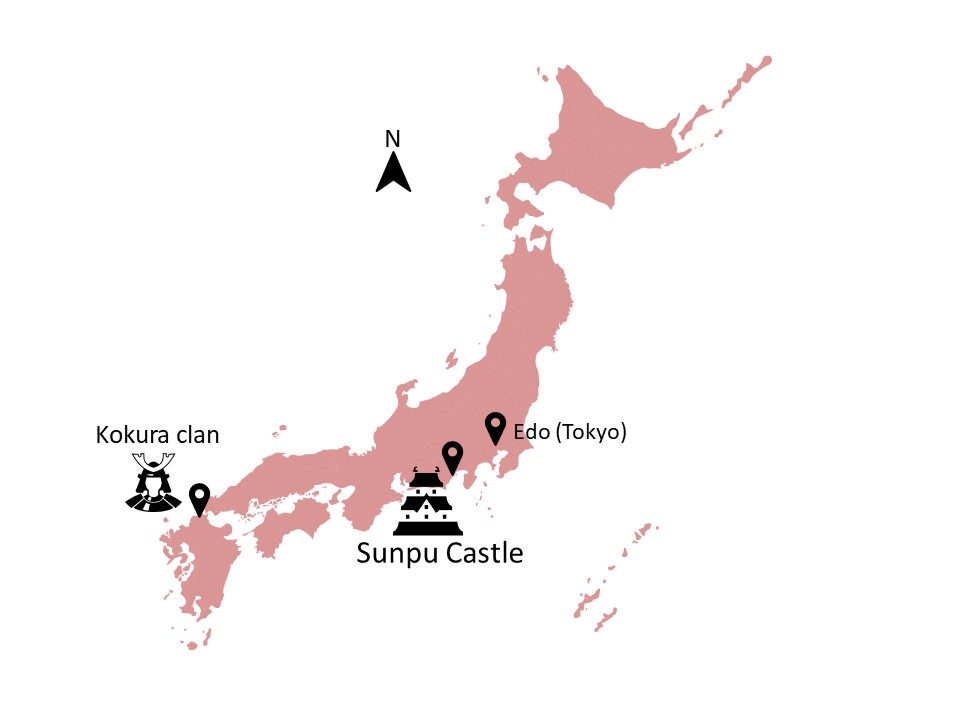 National projects in the Edo period required lords from all parts of the country to contribute manpower. It is commonly believed that the roles of these projects were 1) to prevent clans from accumulating wealth, and 2) to establish a system of control over their territories by forcing them to provide materials and manpower.