A key player behind parental chromosome matching during meiosis

A research collaboration based in Kumamoto University (Japan) has clarified how homologous chromosome pairing--a process necessary for sperm and egg formation where paternally- and maternally-derived chromosomes match and exchange genetic information during meiosis--attracts factors that play a monitoring role. Since details on the genetic information exchange mechanism during meiosis have not yet been clarified, this research may lead to future advances in reproductive medicine, such as the identification of the causes of infertility.

Meiosis is a special type of cell division that takes place in the ovaries and testes to produce eggs and sperm. Here, maternal and paternal chromosomes of the same type are aligned in a process called “homologous chromosome pairing." This meiotic recombination results in the partial exchange of genetic information. Homologous chromosome pairing is an essential process for matching paternal and maternal DNA and facilitating the exchange of DNA sequences between them, but if it doesn't work, meiotic recombination doesn't occur normally and eggs and sperm cannot form.

Homologous chromosome pairing is known to have a mechanism to monitor whether accurate matching is occurring. However, details about how the mechanism is induced on chromosomes is still unclear. Its dysfunction is an important but poorly understood problem with direct implications for reproductive medicine. Researchers at Kumamoto University's Institute of Molecular Embryology and Genetics (IMEG), in collaboration with the University of Tokyo’s Institute for Quantitative Biosciences, have shown that a protein complex called cohesin calls for a watchdog factor during homologous chromosome pairing, and that it also plays an important role as the backbone of the axial structure that binds chromosomes.

In previous studies, a protein called HORMAD1 was shown to emerge along the top of the chromosome during meiosis to monitor the successful matching of homologous chromosomes (Shin et al., 2010, Daniel et al., 2011). Mass spectrometry analysis revealed that HORMAD1 binds to two proteins, SYCP2 and cohesin, both of which are major components of meiotic chromosomes. Furthermore, HORMAD1 appeared normally on chromosomes by binding to cohesin even after the SYCP2 gene was knocked out using genome editing, but it did not function normally when cohesin was knocked out. Thus, it became clear that cohesin acts as a marker to call HORMAD1 to the chromosome prior to homologous chromosome pairing.

During meiosis, chromosomes are held together by special “axis” structures that play a pivotal role in the normal matching of paternal and maternal chromosomes and the exchange of genetic information. Importantly, the cohesin molecule acts as the backbone for these axis structures.

"These results were validated in mice, but cohesin and HORMAD1 proteins work in human germ cells as well,"
said Associate Professor Keiichiro Ishiguro, who led the research project. "If this mechanism fails, meiotic recombination will not work properly. This leads to a significant decrease in sperm and egg formation resulting in infertility. There are many cases of human infertility where the cause is unknown, but we hope that this discovery will help to clarify the pathogenesis for many of the people affected."


This research was posted online in PLOS Genetics on 15 September 2020. 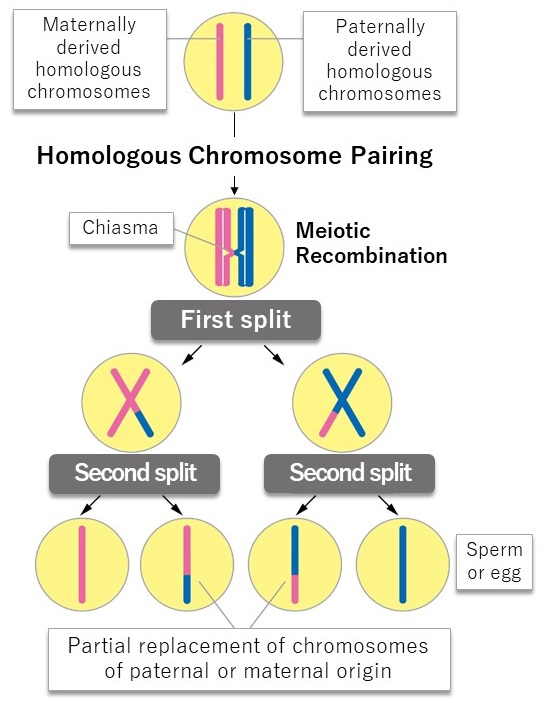 Homologous chromosome pairing is a process where maternal and paternal chromosomes of the same type are aligned, resulting in a partial exchange of genetic information through meiotic recombination.

Localization of HORMAD1, the homologous chromosome pairing monitor, on chromosomes

Cohesin acts as a marker that attracts HORMAD1 and is responsible for tying it onto the chromosome.

Cohesin molecules act as the "backbone" of the chromosome axial structure.