The world’s population is aging at an accelerated rate, especially in developed countries. Since the elderly population is expected to increase in the future, it especially important to maintain healthy life spans. Many of the cells that make up the body eventually decline in function and stop growing after repeated divisions in a process called "cellular senescence," an important factor in health and longevity. Premature senescence occurs when genomic DNA is damaged by stressors such as radiation, ultraviolet light, or drugs, but its mechanisms are not yet fully understood. It can be good, like when cells become cancerous, cellular senescence works to prevent the development of malignancy, but it also increases the likelihood of many age-related diseases. It is therefore important for medical science to try to understand and control it.

Although senescent cells lose their ability to proliferate, recent research has shown that they secrete various proteins that act on surrounding cells and promote chronic inflammation and cancer cell growth. This is called the senescence-associated secretory phenotype (SASP). Cellular senescence is thought to be the cause of aging in the entire body. Senescent cells have been shown to accumulate in the bodies of aged mice, and removal of these cells may suppress whole-body aging. In other words, if cellular senescence is controlled, it may become possible to regulate the aging process of the whole body.

Professor Mitsuyoshi Nakao’s research group at Kumamoto University is studying the mechanisms of cellular aging from the viewpoint of epigenetics—a research field that investigates the activities of the approximately 25,000 protein-coding genes on the human genome, related to life phenomena, health & disease conditions, and aging in the human body. To date, the researchers have screened a wide range of factors involved in the aging of human fibroblasts (a cell type present in all tissues and organs) and found that SETD8 methyltransferase, NSD2 methyltransferase, and other proteins play a role in preventing cellular senescence. So far, no biomarker specific to senescent cells has been discovered. It is now a question of how can we understand the cellular senescence process. Thus, the researchers reviewed cellular senescence over time and in terms of the characteristics of protein-secreting SASPs.

They realized that there are at least four phenotypic variations (states) in cellular senescence: 1. initiation (proliferation arrest), 2. early (anti-inflammation), 3. full (increased inflammation and metabolism), and 4. late (decreased inflammation and metabolism). Focusing on the molecular level changes for each period, they showed that variations in cellular senescence may be shaped by a "senescent program" in which the change of intracellular metabolism and epigenomics (gene ON/OFF control) takes place in a coordinated manner.

The researchers then focused on transcriptional and epigenomic factors that regulate the expression of genes that play important functions in the process of cellular senescence. During the initiation state, genes that promote cell proliferation are suppressed, while genes that block proliferation are activated. It is known that the tumor suppressor proteins p53 and retinoblastoma (Rb) play a major role in this process. In the early state, cell morphology changes significantly and cytokines with anti-inflammatory properties are activated. This may be a defense against the later inflammatory action. Then, in the full state, the genes of pro-inflammatory cytokines become highly expressed and produce a strong inflammatory response. At the same time, the expression of metabolic genes, such as mitochondria, and genes that synthesize proteins are increased via the aforementioned Rb (previously reported by this research group). Here, it is thought that metabolic reactions produce the energy needed to synthesize and secrete proteins. Finally, in the late state, the inflammatory response and metabolism decline, but interferon is produced and secreted in response to the cytoplasmic DNA fragments of the nuclear genome and mitochondrial DNA. At present, the mechanisms and significance of these processes are still unidentified, but it is now understood that cellular senescence results in a qualitatively different inflammatory response.

“We hope that our work will provide an opportunity for the scientific community to consider a new understanding of the mechanisms of cellular senescence and body aging,” said Professor Mitsuyoshi Nakao. “We believe that phenotypic variation in cellular senescence can lead to new methods to promote healthy longevity and the control and prevention age-related diseases.”

This research was posted online in Trends in Cell Biology on 23 September 2020.

[Funds]
1) Grant-in-Aid for Scientific Research (KAKENHI) from the Ministry of Education Culture Sports Science and Technology of Japan (MEXT), 2) The Naito Foundation, 3) The Japan Agency for Medical Research and Development (AMED) 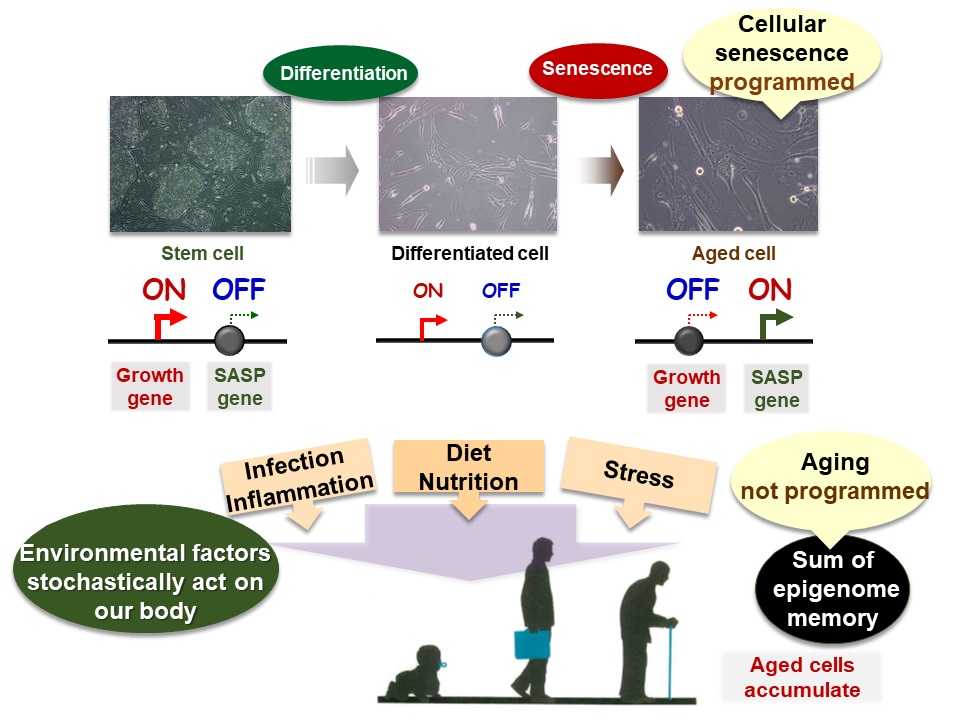 (Top) In cellular senescence, proliferative genes are repressed and senescence genes are activated. This gene regulation takes place through modifications of the epigenome, and may be thought of as a program for cellular senescence.
(Bottom) Individual aging of the entire body is recorded in the epigenome of many cells and is caused by the random actions of many environmental factors.
Senescent cells are an important component of the aging body because they lose their ability to proliferate and secrete a variety of proteins that promote chronic inflammation and cancer development throughout the body. 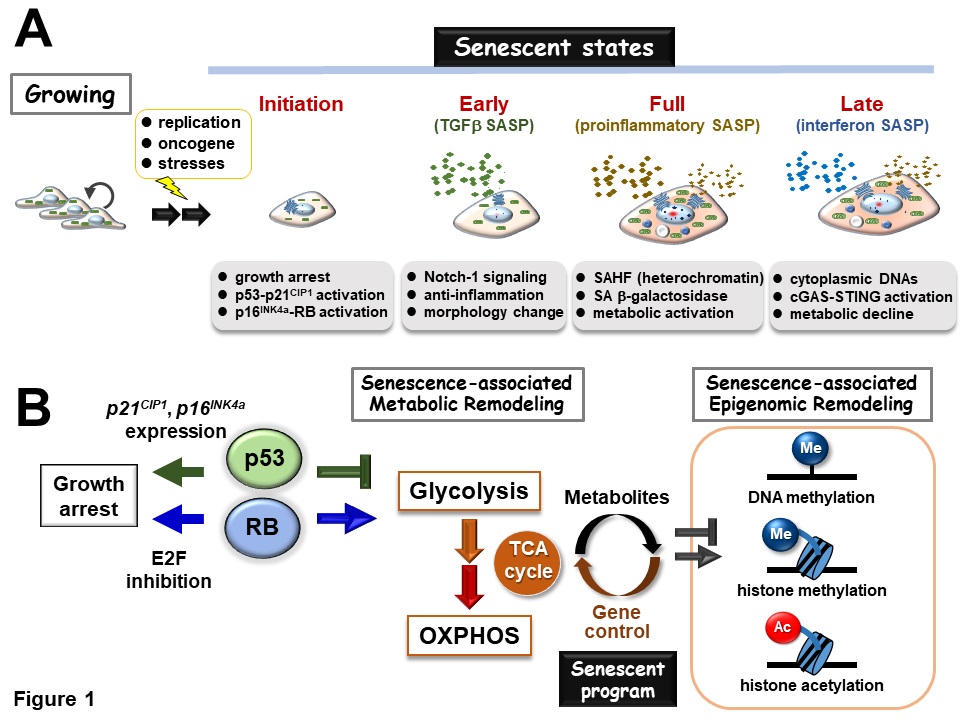 There are at least four states of cellular senescence based on the characteristics of the senescence-associated secretory phenotype (SASP): (1) initiation (growth arrest), (2) early (anti-inflammatory), (3) full (increased inflammation and metabolism), and (4) late (decreased inflammation and metabolism).
Coordination between intracellular metabolism and epigenomic remodeling shapes the phenotypic variation of cellular senescence.