Researchers at Kumamoto University, Japan generated mice lacking the estrogen receptor beta (ERβ) gene, both fiber-specific and muscle stem cell-specific, which resulted in abnormalities in the growth and regeneration of skeletal muscle in female mice. This was not observed in male mice that lacked the ERβ gene, suggesting that estrogen and its downstream signals may be a female-specific mechanism for muscle growth and regeneration.

In humans, skeletal muscle mass generally peaks in the 20s with a gradual decline beginning in the 30s, but it is possible to maintain muscle mass through strength training and a healthy lifestyle. Skeletal muscle can be damaged through excessive exercise or bruising, but it has the ability to regenerate. The muscle stem cells that surround muscle fibers are essential for this regeneration; they also play a part in increasing muscle size (hypertrophy). Muscle stem cell dysfunction is thought to be associated with various muscle weakness, such as age-related sarcopenia and muscular dystrophy. Although basic research on skeletal muscle has progressed rapidly in recent years, most studies were conducted on male animals and gender differences were given much consideration.

Estrogen is a female hormone that maintains the homeostasis of various tissues and organs. A decrease in estrogen levels due to amenorrhea, menopause, or other factors can lead to a disturbance in biological homeostasis. When estrogen binds to estrogen receptors (ERs) in cells, it is transferred into the nucleus and binds to genomic DNA to induce the expression of specific genes as transcription factors. There are two types of ERs, ERα and ERβ. While both ERα and ERβ have high binding capacity to estrogen, their tissue distribution is different, they do not have a common DNA-binding domain, and they may act as antagonists to each other, suggesting that they have different roles. Furthermore, estrogen’s effects on cells can be both ER-mediated and non-ER-mediated.

An epidemiological study of pre and postmenopausal women in their 50s indicated an association between decreased blood estrogen levels and muscle weakness. A research group at Kumamoto University previously showed that estrogen is important for skeletal muscle development and regeneration using an ovariectomized estrogen deficiency mouse model (Kitajima and Ono, J Endocrinol 2016). They also examined the effectiveness of nutritional interventions in estrogen-deficient conditions (Kitajima et al., Nutrients 2017). However, whether estrogen acts directly on the ER of muscle fibers and muscle stem cells to regulate skeletal muscle growth and regeneration, or whether it acts indirectly through other tissues and organs was unclear. In this study, the researchers generated mice with either myofiber-specific or muscle stem cell-specific ERβ gene deletion and analyzed the function of ERβ in skeletal muscle.

To clarify the role of ERβ in the growth of skeletal muscle, researchers generated mice (mKO) in which the action of the ERβ gene could be turned off in myofibers with the administration of the drug doxycycline. ERβ deficiency was induced at 6 weeks of age, and muscle fiber area and strength of the tibialis anterior muscle was measured at 10-12 weeks. Compared to control mice, both indices were reduced in female mKO mice but not in male mice. Since there was no change in the expression of muscle atrophy-related genes, this reduced growth of female mice was not thought to be due to an increase in muscle atrophy. Ovariectomy-induced estrogen deficiency is known to be associated with muscle quality changes, such as a relative increase in the proportion of fast-type fibers (Kitajima and Ono, J Endocrinol 2016), but no such qualitative changes were observed in mKO mice. It was therefore suggested that, while it may have a direct effect on myofiber growth via ERβ (as expressed in myofibers), estrogen may also regulate the quality of myofibers in a non-ERβ-mediated manner.

This study is thought to be the first to show that ERβ in genetic mouse models plays an important role in the growth and regeneration of skeletal muscle through its function in both muscle fibers and muscle stem cells. However, the role of ERβ in male mice has not yet been elucidated and remains to be addressed even though its expression in both male and female mice is comparable.

"Amenorrhea is induced in female athletes through rigorous training or excessive dieting and has become one of three major problems, together with low energy availability and osteoporosis, faced by female athletes worldwide," said study leader Associate Professor Yusuke Ono. "Although the animal findings of this study cannot be directly applied to humans, they do suggest that decreased estrogen during amenorrhea may suppress ERβ activity in muscle fibers and muscle stem cells. For female athletes, this may lead to poor athletic performance and delayed recovery from injuries, and puts them at risk for adverse competitive conditions. Our plan is to continue investigating the pathogenesis of age-related sarcopenia and muscular dystrophy by targeting ERβ and its downstream signals with the goal of developing treatments."

This research was posted online in Stem Cell Reports on 21 August 2020. 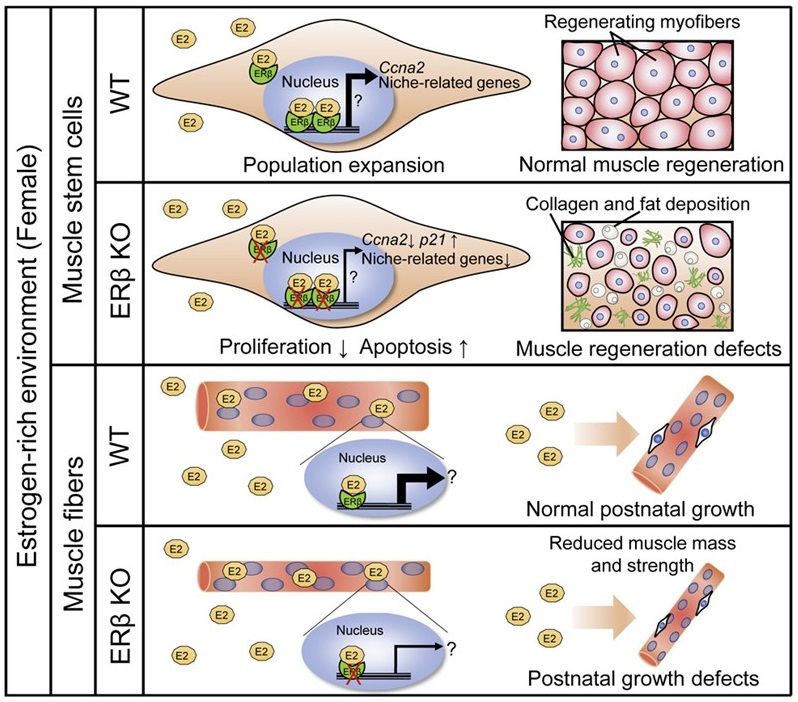 USAGE RESTRICTIONS (Check if the media requires copyright permission.):
Graphical abstract of Seko et.al., Stem Cell Reports, 2020.
This image is made available under the terms of CC BY-NC-ND 4.0. Any further distribution of this work must follow the terms of this license. 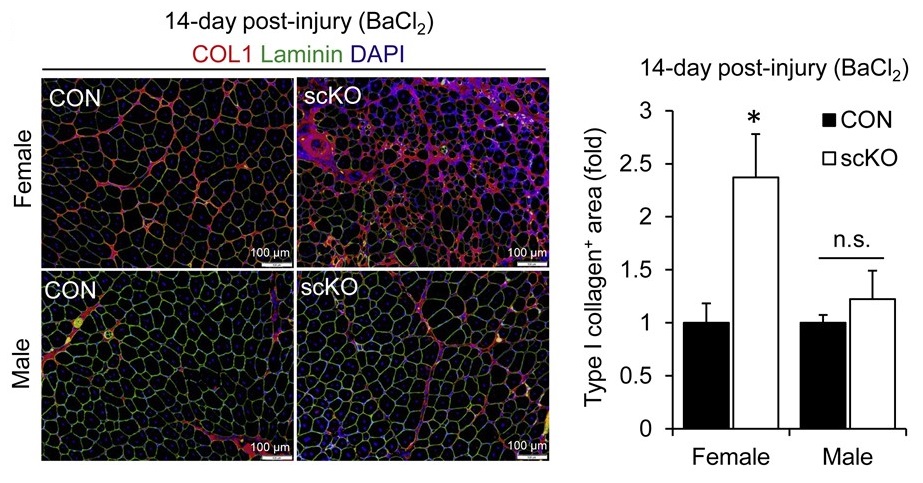 USAGE RESTRICTIONS (Check if the media requires copyright permission.):
Fig. 2(D) of Seko et.al., Stem Cell Reports, 2020.
This image is made available under the terms of CC BY-NC-ND 4.0. Any further distribution of this work must follow the terms of this license. 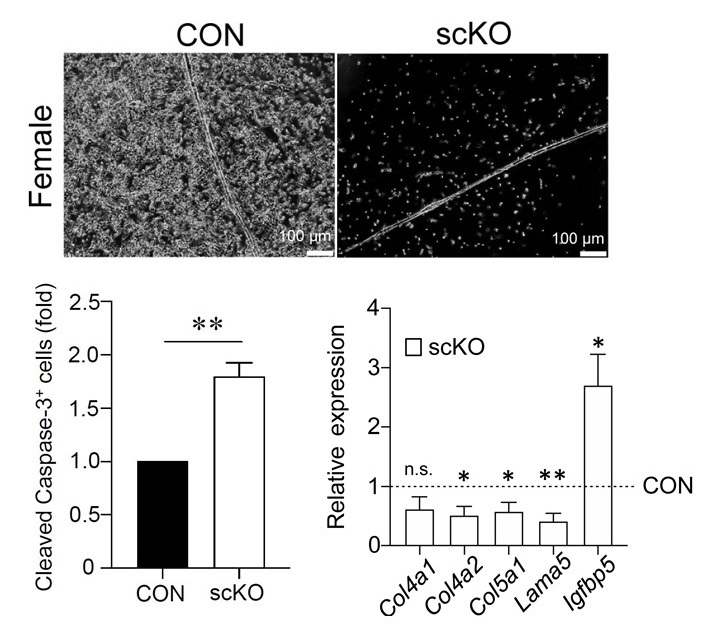 USAGE RESTRICTIONS (Check if the media requires copyright permission.):
Top: Fig. 3(B-top), Bottom-left: Fig. S3(F), and Bottom-right: Fig. 4(F) of Seko et.al., Stem Cell Reports, 2020.
This image is made available under the terms of CC BY-NC-ND 4.0. Any further distribution of this work must follow the terms of this license.