A research collaboration based at Kumamoto University (Japan) has found that activation of PPARα, a fatty acid receptor that detects fatty acids in cells and regulates physiological functions, causes masculinization of Japanese rice fish (medaka). The discovery of this molecular mechanism is expected to advance the development of new sex control technologies.

The sex of mammals is determined in their genes, specifically the XX/XY combination of sex chromosomes. On the other hand, the sex-determination of fish, amphibians, and reptiles is greatly affected by ambient temperature. The medaka (Oryzias latipes), however, is a bony fish that uniquely uses the XX/XY sex determination system. The sex-determining gene, DMY, was recently identified on their Y chromosome. Normally, XY individuals with the DMY gene will differentiate into males and XX individuals (without DMY) will differentiate into females. However, if medaka are bred in water with temperatures of 32 to 34°C during their period of sexual differentiation, XX individuals will differentiate into males. In other words, their genetic sex-determination is affected by temperature. Previous research from Kumamoto University demonstrated that cortisol, a high-temperature-induced stress hormone, directly acts on the gonads and causes masculinization of XX medaka (Hayashi et al., 2010; Yamaguchi et al., 2010; Kitano et al., 2012). However, the molecular mechanism of cortisol masculinization was not determined.

In this study, researchers conducted an RNA sequencing analysis to search for genes activated by high temperature or cortisol. Many genes related to the fatty acid receptor “peroxisome proliferator-activated receptor alpha” (PPARα) were detected, and when a PPARα activator was administered to medaka larvae, XX medaka became male. Furthermore, when knockout medaka with inhibited PPARα function were produced, differentiation into males was completely suppressed, even after the administration of cortisol or a PPARα activator. To the researchers’ knowledge, this is the first time that PPARα activation has been shown to be so involved with medaka sex-differentiation by cortisol or an activator.

"In fish farming for food production, such as flounder or eel, technology that produces only females is sought after because they grow faster than males," said study leader, Professor Takeshi Kitano. "Here, we have revealed the molecular mechanism that induces differentiation into males and we hope that new sexual control technologies using this mechanism will be developed in the future."

This research was posted online in "Scientific Reports" on 15 July 2020. 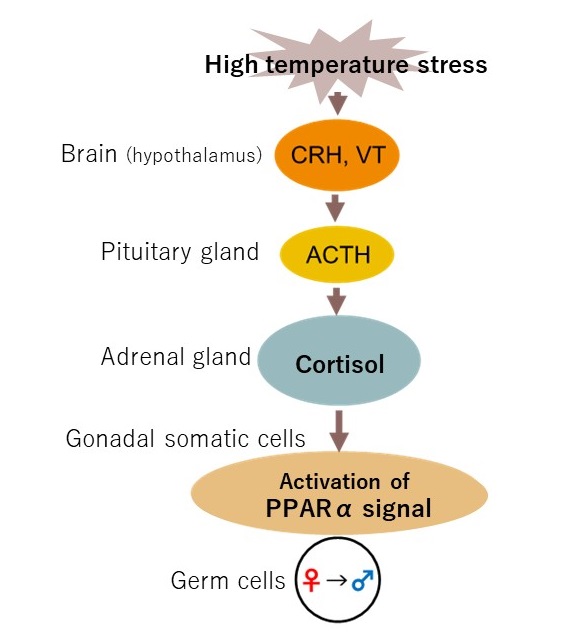 Mechanism for medaka sex-differentiation into males through high temperature stress