A joint project led by Kumamoto University (Japan) has discovered a new mechanism for anticancer drug resistance in gastric cancer. Researchers found that the Annexin A6 molecule contained in extracellular vesicles (EVs) is secreted by cancer-associated fibroblasts (CAFs) and taken up by gastric cancer cells, resulting in resistance to anticancer drug treatments. This finding creates new avenues for novel drug development targeting Annexin A6 and cancer-associated fibroblasts (CAFs).

Gastric cancer is the second most common cancer in Japan. For advanced gastric cancer in particular, treatment involves various anticancer drugs but too often they do not sufficiently improve medical conditions.

The tumor microenvironment is the area around cancer cells that consists of various cells and support systems, both physical and biochemical. Within this microenvironment, CAFs are known to enhance the malignant transformation of cancer by secreting various factors.

“Our research found that higher amounts of CAFs in tissues resulted in worse conditions for gastric cancer patients. This was also true in patients with advanced gastric cancer who had been treated with anticancer drugs,” said Dr. Tomoyuki Uchihara. “Based on this, we wondered if there was some factor derived from CAFs that induced anticancer drug resistance.”

This research was posted online in "Cancer Research" on 30 June 2020. 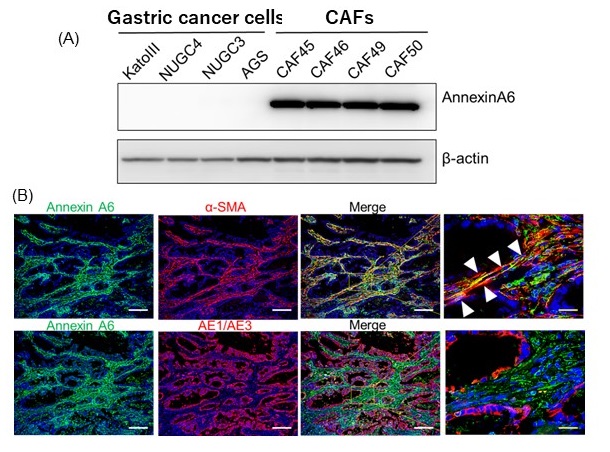 Annexin A6 is specific to CAFs

A: The expression level of Annexin A6 protein in gastric cancer cells and CAFs. Annexin A6 is expressed only in CAFs.
B: Fluorescent immunostaining in tissues from gastric cancer patients. AnnexinA6 (green) is consistently expressed in cancer-associated fibroblasts (CAFs: upper red) (yellow region in merged figure). However, it is rarely expressed in cancer cells (lower red) (yellow areas are barely visible when merged).

Extracellular vesicle (EV) Annexin A6 secreted by cancer-associated fibroblasts (CAFs) is taken up by gastric cancer cells. Annexin A6 is involved in the acquisition of anticancer drug resistance by stabilizing β1 integrin present on gastric cancer cell membrane and then activating downstream signals.