- Toward an era where aging can be controlled.-


Researchers from Kumamoto University in Japan have used comprehensive genetic analysis to find that the enzyme NSD2, which is known to regulate the actions of many genes, also works to block cell aging. Their experiments revealed 1) inhibition of NSD2 function in normal cells leads to rapid senescence and 2) that there is a marked decrease in the amount of NSD2 in senescent cells. The researchers believe their findings will help clarify the mechanisms of aging, the development of control methods for maintaining NSD2 functionality, and age-related pathophysiology.

As the cells of the body continue to divide (cell reproduction), their function eventually declines and they stop growing. This cellular senescence is an important factor in health and longevity. Cell aging can also be stimulated when genomic DNA is damaged by physical stress, such as radiation or ultraviolet rays, or by chemical stress that occurs with certain drugs. However, the detailed mechanisms of aging are still unknown. Cell aging can be beneficial when a cell becomes cancerous; it prevents malignant changes by causing cellular senescence. On the other hand, it makes many diseases more likely with age. It is therefore important that cell aging is properly controlled.

Although senescent cells lose their proliferative ability, it has recently become clear that senescent cells secrete various proteins that act on surrounding cells to promote chronic inflammation and cancer development. Since senescent cells are more active than expected, cellular aging is thought to be responsible for whole body aging. This idea has been supported by reports of systemic aging suppression in aged mice after removal of accumulated senescent cells. In other words, if you can control cell aging, you may be able to control the progression of aging throughout the body.

Previously, NSD2 was shown to regulate gene function. Furthermore, it was thought that methylation by NSD2 of the histone proteins wrapped around genomic DNA enhanced the function of genes in the vicinity. However, its association with cell aging was unknown. Using comprehensive genetic screening to suppress the action of the NSD2 gene in fibroblasts when knockdown (RNA interference method) was performed, cell senescence was induced and the typical characteristics of senescent cells appeared. In other words, the researchers had found that NSD2 plays a role in preventing cell senescence.

Next, they comprehensively analyzed all protein-coding gene expressions using mRNA sequencing to explore senescent cells with reduced NSD2. The expression of genes related to cell aging increased and, in particular, the function of genes of proteins that promote cell growth decreased. Histones located in these gene clusters are methylated by NSD2 in proliferating cells, but methylation was found to have decreased in senescent cells with reduced NSD2. Simply put, decreased NSD2 reduces the activities of genes involved in cell growth thus stopping growth.

Researchers then used serum response experiments to examine how NSD2 function is regulated. Normally, cells grow by the actions of proteins that promote growth (growth factors) in serum. Senescent cells, on the other hand, irreversibly stop proliferation and do not typically increase again. The experiment showed that the addition of serum rapidly increased the amount of NSD2, and that NSD2 is required for expression of growth-promoting genes and cell growth. Furthermore, it was found that senescent cells with reduced NSD2 completely lack the ability to grow in serum. Thus, NSD2 is thought to prevent cell senescence by maintaining both cell growth and serum response.

"NSD2 is the fourth protective factor of cellular senescence that our team has identified," said Professor Mitsuyoshi Nakao. "With the discovery that NSD2 protects against cellular senescence, this study clarifies a basic mechanism of aging. We expect this to be useful for elucidating aging mechanisms and developing control methods to regulate enzyme activity by chemicals or metabolites."

This research was posted online in Aging Cell on 22 June 2020. 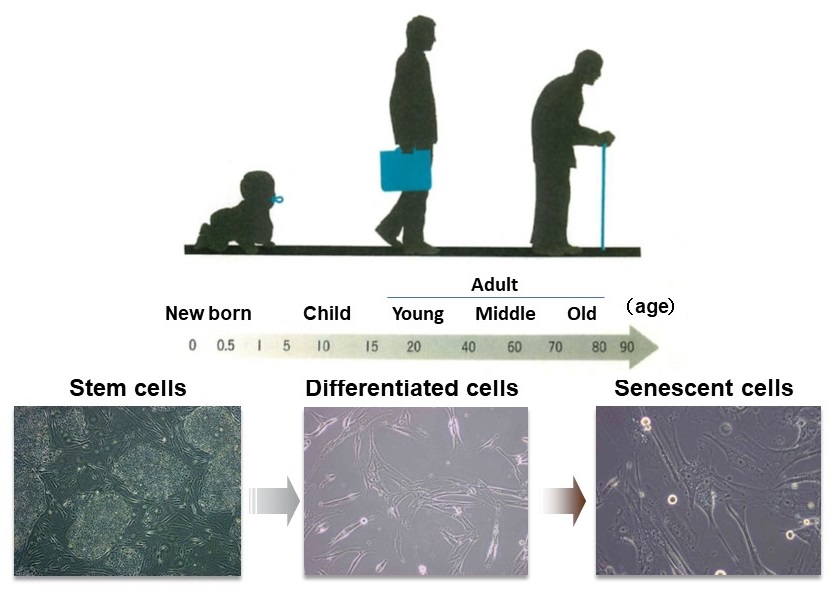 The human body and the cells that make it up have a “program” for aging. It is thought that there is an accumulation of senescent cells in tissues and organs as we get older. 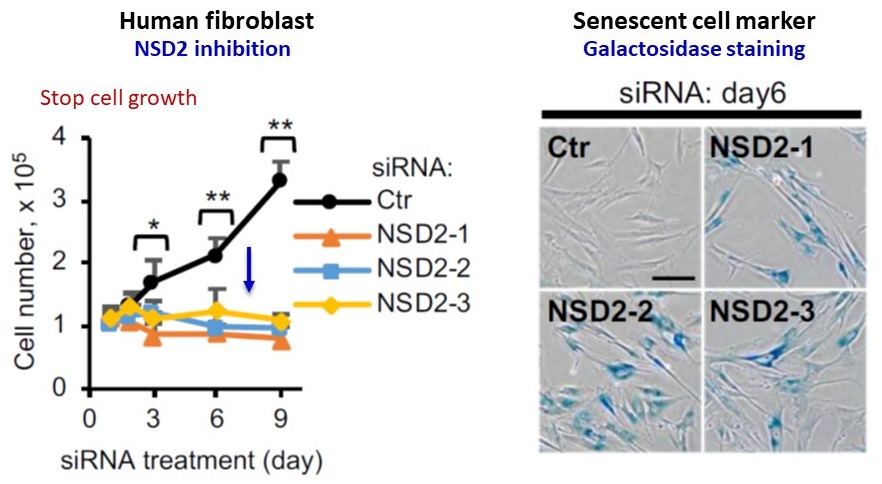 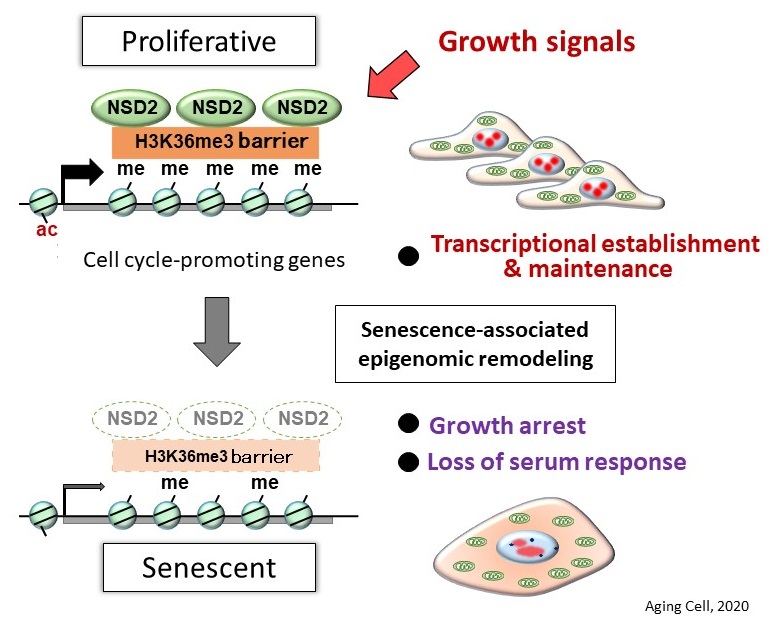 USAGE RESTRICTIONS:
Image is the graphical abstract of Tanaka et.al. 2020, and is available under the terms of CC by 4.0. Any further distribution of this work must follow the terms of this license.