The novel mechanisms for inflammation and cancer induced by HTLV-1

A research group from Kumamoto University, Japan, has clarified the mechanism by which human T-cell leukemia virus type 1 (HTLV-1) causes inflammation and oncogenesis. The action of the viral gene HTLV-1 bZIP factor (HBZ) changes the reactivity of immune cells (T cells) infected with HTLV-1 to cytokines, which results in inflammation. This research is expected to contribute to the understanding of the mechanisms of HTLV-1-induced malignant tumors (ATL) and HTLV-1-related inflammatory diseases, and lead to the development of new treatment and prevention strategies.

HTLV-1 is a virus that causes a malignancy of lymphocytes called adult T-cell leukemia (ATL) and a chronic neurological disease called HTLV-1 associated myelopathy (HAM). The virus causes these diseases by increasing the number of infected lymphocytes in the body. Most HTLV-1 infected individuals remain asymptomatic, but in about 2-5% of infected people, infected cells become malignant and develop ATL.

Researchers genetically engineered HBZ transgenic mice (HBZ-Tg) to analyze the function of HBZ; this murine model expresses HBZ in CD4+ T lymphocytes. In their model, CD4+CD25+Foxp3+ T cells increased (these cells also increase in HTLV-1-infected individuals), and the mice developed inflammation and malignant lymphoma. The researchers thus hypothesized that HBZ plays an important role in the pathogenicity of HTLV-1.

To evaluate the roles of IL-6 in the pathogenesis of HBZ, researchers created HBZ-Tg mice that were unable produce IL-6 (HBZ-Tg/IL-6 knockout mice). Unexpectedly, the incidence of inflammation and lymphoma in HBZ-Tg/IL-6 knockout mice significantly increased compared with HBZ-Tg mice, revealing that IL-6 has suppressive effects on the pathogenicity of HBZ. IL-6 is a cytokine with various functions and is known to inhibit the differentiation of regulatory T cells (Treg) that have a suppressive function on immune reaction. Researchers previously reported that Treg-like cells increased with HBZ-Tg and were involved in the development of inflammation in HBZ-Tg mice. This indicates that, in HBZ-Tg mice, IL-6 deficiency further promotes Treg differentiation and accelerates the development of diseases.

On the other hand, HBZ-Tg mice were found to produce the immunosuppressive cytokine, IL-10. In addition, IL-10 promoted the proliferation of T cells derived from HBZ-Tg mice. Since normal mouse T cells were not affected by IL-10 stimulation, HBZ is thought to modulate IL-10 stimulation and promotes cell proliferation. Moreover, HBZ was found to interact with the cellular transcription factors STAT1 and STAT3--which work downstream of the IL-10 signal--and disrupt their transcriptional activities. This suggested a previously unknown mechanism of HBZ-mediated pathogenesis by perturbing the reactivity of CD4-positive T cells to IL-6 and IL-10.

"Our analysis brings us closer to finding the mechanisms which HTLV-1 uses to promote growth of infected cells and sustain persistent infection. We expect that our work will contribute toward the elucidation of the molecular mechanisms of HTLV-1 associated diseases," said Associate Professor Jun-ichirou Yasunaga, who lead the study. "IL-6 and IL-6 receptors are therapeutic targets for autoimmune diseases such as rheumatoid arthritis, and inhibitors for them are currently in clinical use. Our results alert us to the possibility that the blockade of IL-6/IL-6R signaling increases the risk of disease progression in some HTLV-1-infected individuals. Careful evaluations of the risk and efficacy of such a treatment are necessary."

This research was posted online in the Proceedings of the National Academy of Science on 26 May 2020. 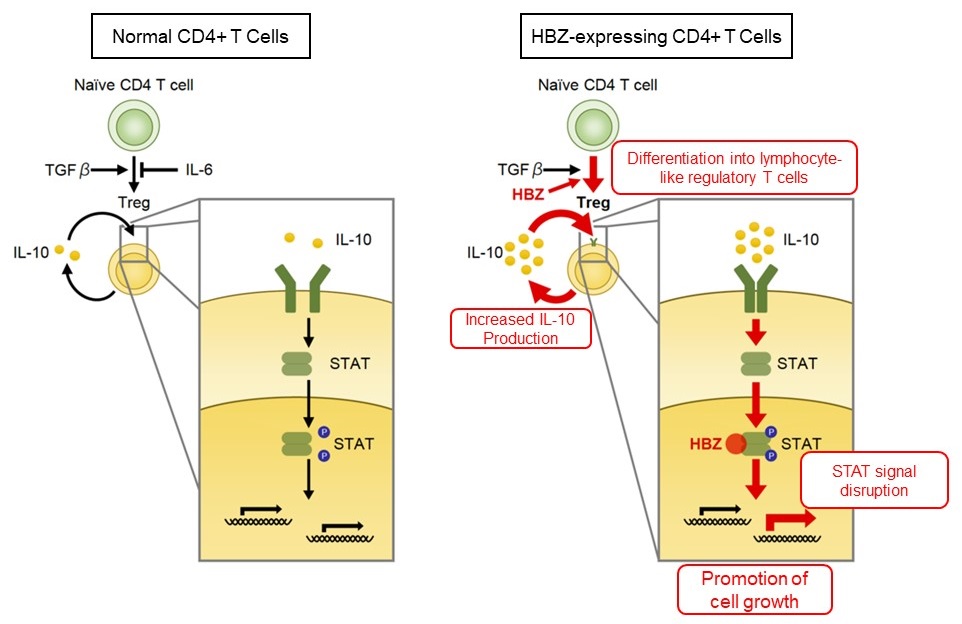 In HBZ-expressing CD4-positive T cells, differentiation into T cells that resemble regulatory T lymphocytes is enhanced and production of the immunosuppressive cytokine, IL-10,  is increased. Furthermore, HBZ modulates the IL-10 signal by the binding of HBZ to STAT1/3 protein, and is thought to promote cell proliferation.