Alport syndrome severity can be predicted by causative protein genotype

A Japanese research team has successfully developed a system to predict the severity of Alport syndrome, a hereditary kidney disease. In patients with Alport syndrome, abnormalities in the causative protein, type IV collagen, often lead to chronic renal dysfunction, which eventually leads to kidney failure. Estimating the severity of the disease has been difficult, but researchers from Kumamoto University recently demonstrated that severity prediction can be made by analyzing a person’s type IV collagen genotype. The researchers discovered this after studying the behavior of several genetic mutations using a proprietary type IV collagen trimer evaluation system that can predict the severity of nephropathy in Alport syndrome patients. They expect their development will contribute to the advancement of precision medicine for hereditary intractable diseases.

Alport syndrome is a serious disease that leads to end-stage renal failure and death. Most patients need dialysis or kidney transplant. In Europe and the United States, it occurs in 1 out of 5,000 to 10,000 people.

Type IV collagen forms a complex of three polypeptide chains (a trimer of fibrous proteins). Mutations in any of the chain genes cause abnormalities in the polypeptide chains, resulting in renal dysfunction. Several hundred mutations of type IV collagen have been reported so far and the severity of the disease varies depending on the mutation. Identification of these mutations is important to predict the severity of renal pathology.

This study uses a system (Split NanoLuc®) developed by Professor Hirofumi Kai of Kumamoto University that is highly sensitive to abnormalities of type IV collagen trimers. Prof. Kai’s group evaluated the intracellular trimer formation and extracellular trimer secretion of nine (four severe, four mild, one non-pathogenic) type IV collagen gene mutants. Severe mutations significantly reduced the formation and secretion of collagen IV trimers. Additionally, most of the mild mutations produced only a slight reduction of the extracellular secretory trimer. This shows that nephropathy severity is mostly determined by the ability of type IV collagen trimers to form intracellularly and secrete extracellularly. Furthermore, the non-pathogenic mutant collagen did not show any changes in trimer behavior.

These results demonstrate that it is possible to distinguish between pathogenic and non-pathogenic mutations with the Split NanoLuc® evaluation system. This can provide important data for estimating the pathological severity and identification of pathogenic mutations. In particular, it allows for the construction of a system to predict the severity of nephropathy using only the gene mutation information in Alport syndrome patients.

"The remarkable progress of genome analysis technology in recent years has enabled comprehensive analysis of disease-related genes. The momentum of precision medicine based on genetic information is increasing for various diseases," said Associate Professor Tsuyoshi Shuto, who co-authored this study. "In the field of hereditary kidney disease, large-scale genetic analysis has become widespread. Accurate diagnoses and new disease classifications through identification of causative gene mutations are being diligently conducted. We expect that this research will greatly advance the field of precision medicine for various hereditary diseases as well as Alport syndrome."

This research was posted in the "Kidney International Reports" (Article in Press) on 30 January 2020. 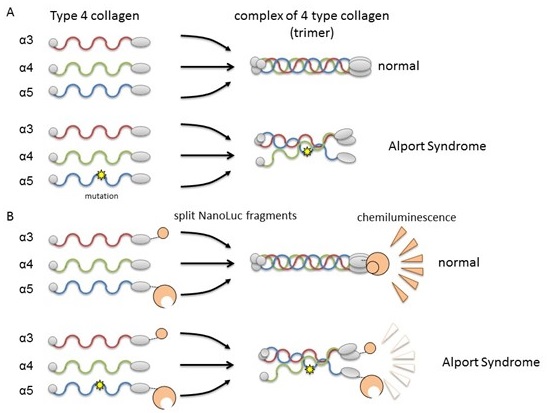 Formation of collagen IV trimer and its monitoring system

(A) Collagen IV α3, α4, and α;5 normally form trimers and become constituents of the basement membrane in the kidney. In Alport Syndrome, genetic mutation in one of the chains disrupts trimer formation. (B) By fusing collagen chains to Nanoluciferase fragments, it is possible to assess trimer formation of α3, α4, and α5 by luminescence intensity. 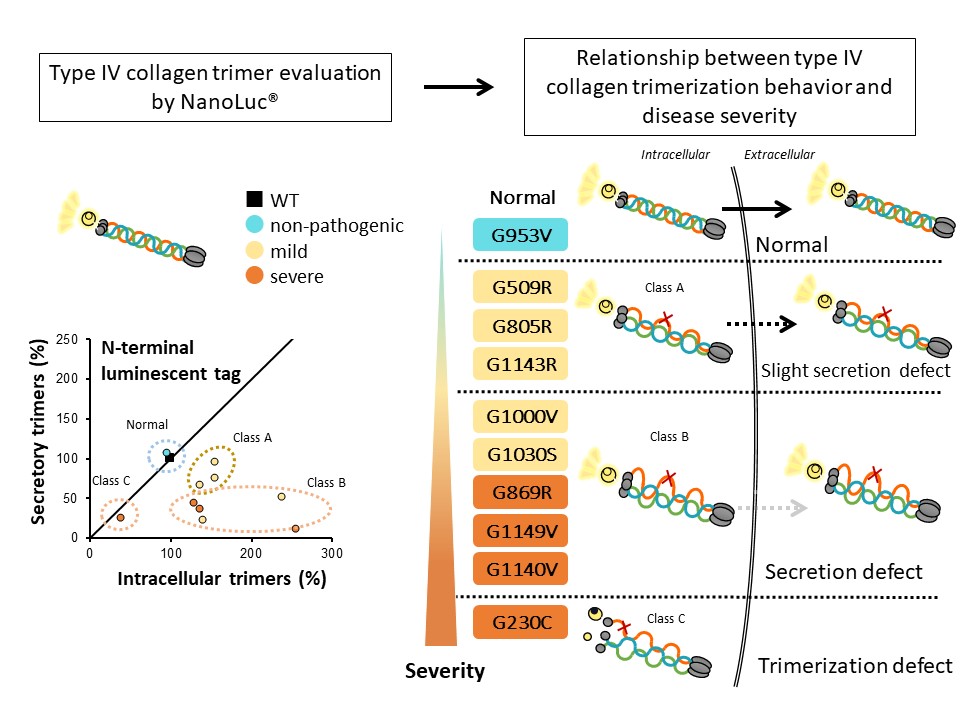 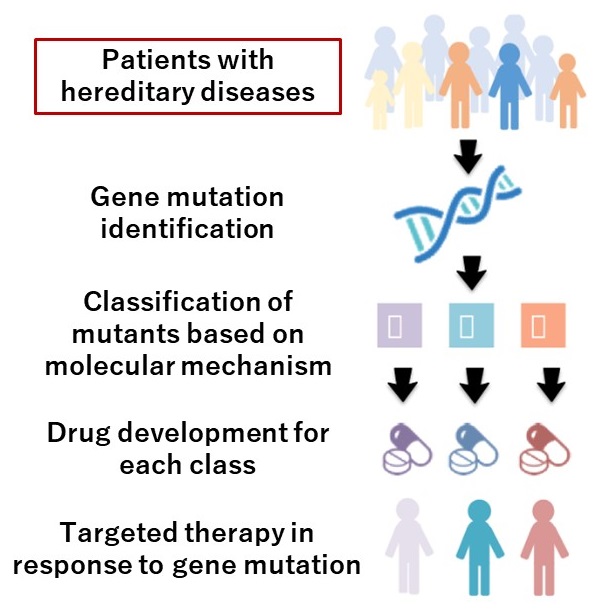 Hereditary disease severity can be predicted individually by examining which genes are mutated. Treatment can then be adjusted according to the results.