Nobody at home: A great increase in out-of-home rates over 28 years in Kumamoto, Japan - New insights from novel use of travel survey data -

Delivery services have increased rapidly with the expansion of online shopping and, in Japan, failed deliveries that result in redelivery attempts occur 20% of the time. In terms of labor, fuel, and environmental (increased CO2 emissions) costs, empty homes causing redeliveries have become an issue. Until now, long-term trends of households with every member out-of-home has not been fully clarified.

Researchers from Kumamoto University, Japan used a travel behavior survey conducted by local governments, called the Person Trip (PT) Survey, to analyze the movement data of people in the Kumamoto metropolitan area--specifically when every member of a household was out-of-home. The PT survey captures a person’s movements over a day to examine their travel behavior. It is basic data that is used to develop transportation plans.

The researchers used PT surveys of the Kumamoto metropolitan area from 1984, 1997, and 2012 to analyze both individual out-of-home rates (IO rates) and the rates of households with every member out-of-home (HEMO rates). Between 1984 and 2012, the IO rate did not change significantly, except for a slight increase in the evening. The relatively unchanging IO rate may be caused by an offset of a decreased high-IO-rate working population by an increase in high-IO-rate active elderly.

This is the first study to analyze HEMO rates using PT surveys. Although the research team used Kumamoto data this time, they are currently conducting similar analyses using travel data from both Japan and overseas.

"The issues arising from all household members being out-of-home of are not only related to failed deliveries, but also to difficulties investigators have visiting households during the census and similar visits," said study leader Associate Professor Takuya Maruyama. "We hope that this study leads to the development of efficient redelivery systems and on-site survey methods. It can also be useful for studying methods to deter crimes such as burglary."

This research was posted online in the "Journal of Transport Geography" on 9 January 2020.

Example of out-of-home times for different family members. Households with every member out-of-home (HEMO) at 11 AM on any given day has increased by 10.2 percentage points over nearly 30 years in Kumamoto, Japan. 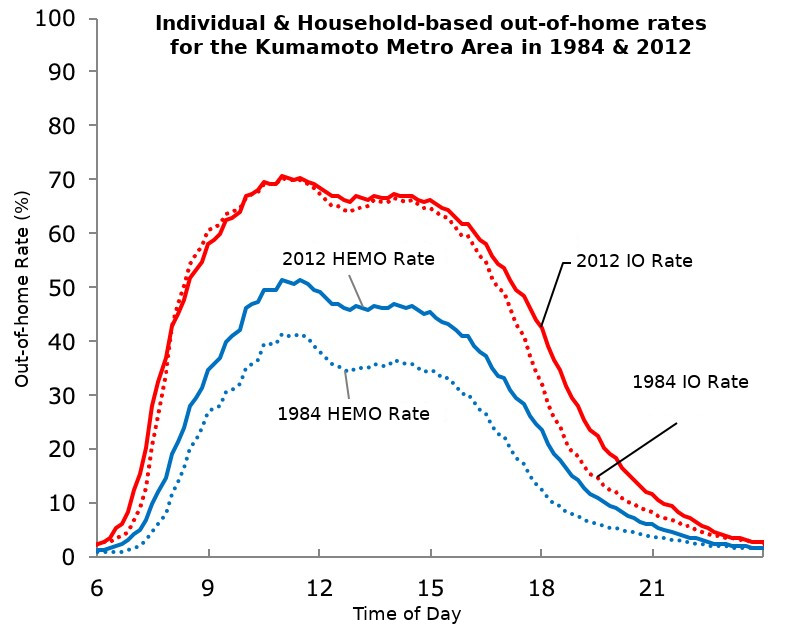 IO rates are higher than HEMO rates simply because having more members in a household allows for a higher chance that someone will be home.

While there was little change in the IO rates from 1984 to 2012, the HEMO rates increased greatly over that 28-year period. It is thought that this is due to increases in active elderly and working mothers, and a decrease in household size.