The fifth Japan-Indonesia Rectors’ Conference was held for two days from October 10th through October 11th, 2019 in Hiroshima. The Dean of the Faculty of Engineering and Head of the Faculty of Advanced Science and Technology, Tsuyoshi Usagawa of Kumamoto University, attended the conference.
The last conference was held in Surabaya, Indonesia in 2017. In this fifth conference, at Hiroshima University, Japan hosted lively discussions and interactions under the theme of Collaboration in Research and Education for a Sustainable and Peaceful Society.
On Thursday, October 10th, Fukuda Yasuo, Chairman of the Japan-Indonesia Association and former Prime Minister of Japan, and Shiraishi Takashi, Chancellor of the Prefectural University of Kumamoto, delivered the keynote speeches. Following this, participants were divided into three groups to discuss education, research and industry collaboration for sustainable development. Later, Inter-University Individual Meeting Sessions were held.
Each participating university in Japan set up a booth and individually spoke with participating universities from Indonesia to build relationships and networks. On Friday, October 11th, after summaries of discussions of the previous day were read, a joint statement was adopted after it was proposed by Ochi Mitsuo, President of Hiroshima University and Prof. Ismunandar, Director General for Learning and Student Affairs at the Ministry of Research, Technology and Higher Education in Indonesia.
The two-day conference provided a valuable and meaningful opportunity to deepen relationships between universities in Japan and Indonesia. 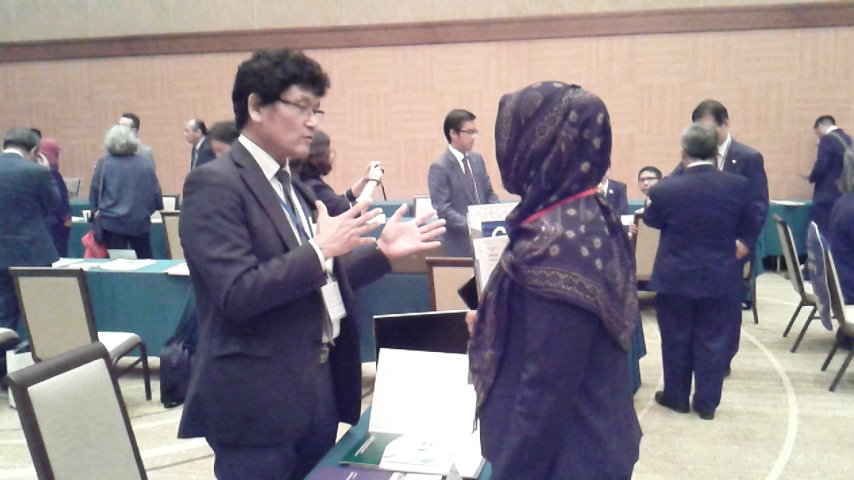