A tale of two proteins: The best and worst of metabolic adaptation

The Developmental Origins of Health and Disease (DOHaD) hypothesis states that the nutritional environment in early life makes people susceptible to lifestyle-related diseases, such as obesity, diabetes and heart attack, as adults. Many of those diseases exhibit reduced mitochondrial metabolism in the tissues of the body. Now, researchers in Japan reveal that two metabolic pathways involved in energy metabolism may play a role in the DOHaD hypothesis.


The Developmental Origins of Health and Disease (DOHaD) hypothesis is supported by multiple human epidemiological studies and animal studies. It states that the nutritional environment in early life makes people susceptible to lifestyle-related diseases, such as obesity, diabetes and heart attack, as adults. Many of those diseases exhibit reduced mitochondrial metabolism in the tissues of the body. Now, researchers from Kumamoto University in Japan reveal that two metabolic pathways involved in energy metabolism may play a role in the DOHaD hypothesis.

All cells regulate gene expression related to metabolic pathways, and adapt to environmental changes such as fluctuations in nutrition, oxygen supply, exercise, and temperature. Cells in the human body use two types of cellular metabolism, mitochondrial respiration and glycolysis. Mitochondrial respiration produces energy for the cell when oxygen is supplied (aerobic), and glycolysis is used when oxygen is scarce (anaerobic). The activity of metabolic genes changes significantly as the method of energy production shifts between these two mechanisms. Some of the most critical changes are due to histone acetylation and methylation (the addition/removal of acetyl and methyl groups) of lysine amino acids. The enzymes deacetylase SIRT1 and demethylase LSD1 are especially important in the regulation of metabolic genes because they remove the acetyl and methyl groups, respectively, of target proteins.

DOHaD theorizes that people affected by malnutrition during early development may have a low birth weight and an increased risk of lifestyle-related diseases as adults. Although the mechanisms behind this have not been clarified, the researchers think that at least two responses work at different times. The immediate response consumes stored energy and prioritizes maintaining life, and the adaptive response “programs” the body to store energy in anticipation of future bouts of starvation. This is considered a natural survival strategy for nascent undernutrition. An adaptive response can easily adjust to undernutrition, but it makes a person more susceptible to lifestyle-related diseases, such as obesity and diabetes, under an excess of nutrition.

The NAD+– SIRT1 pathway burns energy and the FAD– LSD1 pathway stores energy, and together they can remodel metabolic tissues. In muscle development, the SIRT and LSD1 pathways selectively promote slow and fast twitch fiber formation respectively, which increases susceptibility to lifestyle-related diseases. Thus, the researchers believe that these enzymes are involved in DOHaD mechanisms. Specifically, that SIRT1 can play a role in the immediate response and that LSD1 can be involved in the adaptive response.

Speaking about future activities, research leader Professor Mitsuyoshi Nakao said, "We hope our work will help lead to new disease control and prevention strategies by improving the understanding of lifestyle-related diseases, and the nutrition of young parents and babies during perinatal periods."

This work was posted online in "Trends in Endocrinology and Metabolism" on 5 May 2019.

[Image details]
CREDIT: Professor Mitsuyoshi Nakao
USAGE RESTRICTIONS: This image may only be used in conjunction with the accompanying release, or stories written about the work described in the release with reference to the original work.

The Developmental Origins of Health and Disease (DOHaD) Hypothesis

he Developmental Origins of Health and Disease (DOHaD) hypothesis postulates that the nutritional environment during the developmental period makes a person susceptible to lifestyle-related diseases later in life. In this example, undernutrition during the perinatal stage produces a low birth weight (<2,500g) as an immediate response, and an adaptive response that “programs” the body to prepare for future bouts of starvation. If the person has a highly nutritious diet as an adult, they have an increased risk of diseases such as obesity, diabetes, and heart attack. 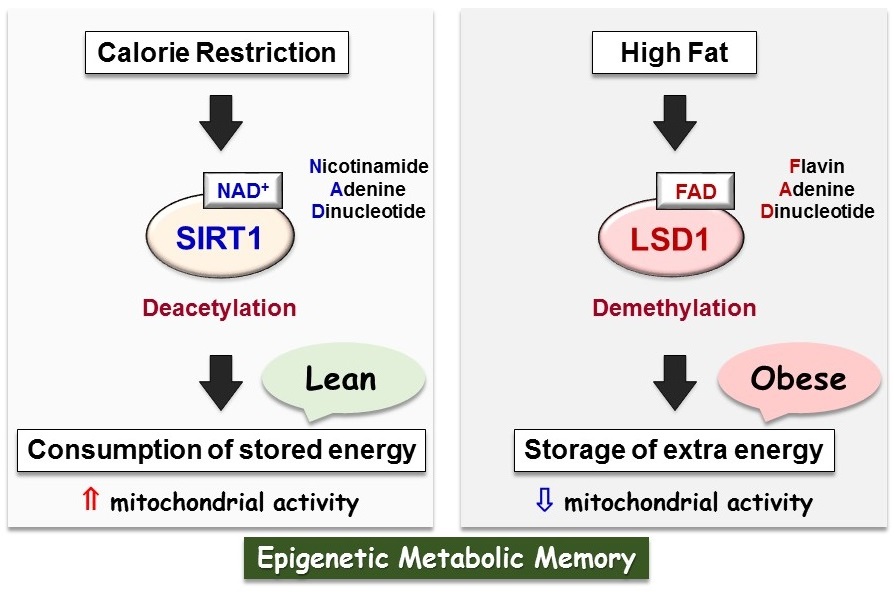 Researchers from Kumamoto University, Japan have revealed that two metabolic pathways provided by the two enzymes SIRT1 and LSD1 control the consumption and storage of energy respectively.