Researchers from Kumamoto University, Japan have developed a new polysulfide donor: a chemical compound composed of chains of sulfur atoms that can artificially increase reactive sulfur species (chemically reactive molecules containing sulfur) in cells and tissues. This donor is believed to be an excellent candidate for a new anti-inflammatory therapy because it has an extremely high anti-inflammatory effect.

In the cells of many organisms, metabolites called reactive sulfur species (RSS) are made from the amino acid cysteine. Recent studies have revealed that RSS protect cells from oxidative stress and, under certain conditions, have the important function of maintaining mitochondrial respiration. Polysulfide donors are expected to be an important tool in investigating the function of RSS, and are being developed all over the world. However, their therapeutic effects remain to be discovered.

A collaboration between researchers at Kumamoto University (Kumamoto, Japan) and Tohoku University[1]  (Sendai, Japan) has succeeded in synthesizing a new polysulfide donor by linking multiple sulfur atoms to acetylcysteine, an artificial amino acid. Their experiments revealed that the new donor was able to quickly penetrate into cells and greatly increase the RSS content by transferring extra sulfur atoms to intracellular cysteine and gluthathione.

When immune cells were treated with the donor, macrophage response to stimulation by various inflammation-inducing substances (e.g., lipopolysaccharides derived from gram-negative bacteria) was greatly inhibited. In other words, the researchers found that their new polysulfide donor was very good at reducing inflammation. To confirm its anti-inflammation properties, the polysulfide donor was administered to mice suffering from endotoxin shock--a condition that often leads to death due to excessive inflammation. Compared to non-treated mice, the survival rate significantly improved.

"This is a landmark achievement that shows, for the first time, that RSS are closely involved with immune function regulation, and that inflammatory pathology can be improved by artificially increasing RSS," said study leader, Professor Tomohiro Sawa of Kumamoto University. "Furthermore, excessive inflammatory reactions are involved in endotoxin shock, allergies, and autoimmune diseases. Steroid hormones and immunosuppressants are the typical treatments for these disorders, but they come with various side effects. In the future, we expect to target intracellular active sulfur regulation to develop new anti-inflammatory therapies."

This research was posted online in "Cell Chemical Biology" on 7 March 2019. 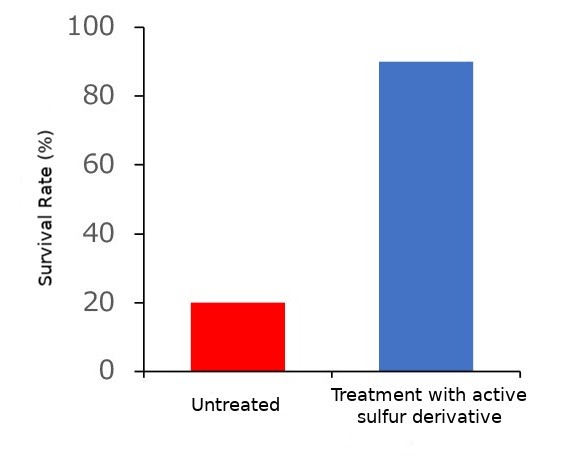 Therapeutic effect of a polysulfide donor on a murine model for endotoxin shock
When lipopolysaccharide derived from E. coli was administered intraperitoneally in mice, the survival rate decreased to 20% after 96 hours in the untreated group. Treatment with a polysulfide donor 30 minutes after administration of lipopolysaccharide improved the survival rate to 90%. In the treatment group, they also found that the amount of cytokines, an indicator for inflammation, was greatly reduced.

[Images Details]
CREDIT: Prof. Tomohiro Sawa
USAGE RESTRICTIONS: This image may only be used in conjunction with the accompanying release, or stories written about the work described in the release with reference to the original work.