A group of international researchers has discovered how plant root hair grows straight and long. Many studies of root hair growth have been performed, however, the molecular mechanism for the suppression of growth on the sides of root hair had not been clarified until now.

Root hair increases the surface area of the root which enables it to absorb more water and nutrients from the soil. To develop an elongated structure, cell expansion on the lateral sides of the root hair must be suppressed as the tip continues to elongate. If expansion on the sides of the hair isn’t suppressed, it will bulge out like a balloon and become unable to form the elongated structure. Without this growth suppression, it is impossible for the hair to grow long in soil.

Using the model plant Arabidopsis thaliana, the researchers previously clarified that phosphorylated kinase "PIP5K3" and its product "PI (4,5) P2" exist in the root hair during growth. In their current work, they found another phosphorylated kinase, FAB1, and its product, PI (3,5) P2, were localized on the membranes of cells on the lateral side of the growing root hair. With this realization, they established Arabidopsis thaliana transgenic lines expressing fluorescent marker proteins on PI (3,5) P2 and PI (4,5) P2, and observed their localizations at various stages of root hair growth. As a result, they were able to clarify that PI (3,5) P2 is found in cells membranes on the sides of root hairs and PI (4,5) P2 develops in membranes at the tip, revealing two distinct regions during root hair growth.

Artificially reducing the amount of PI (3,5) P2 present on the side of the root hair makes it thick and wavy, eventually becoming plump and bulging. When the side of the root hair in this state was measured with an atomic force microscope, it was only about half the hardness of ordinary root hairs. To investigate the cause of this decreased hardness, researchers examined the structure of the cortical microtubules, which are involved in plant cell morphogenesis. They found that the fibrous structure of cortical microtubules had become extremely fragmented. Furthermore, the abundance of xylan, a component of the secondary cell wall that affects the hardness to the cell wall, decreased greatly in accordance with a decrease of PI (3,5) P2.

Researchers also examined the expression of ROP (Rho-related GTPases from plants) family proteins, which are involved in controlling the cytoskeleton, and found that ROP2 and ROP10 are expressed specifically in root hairs. An examination of the interaction between PIP5K3 and FAB1 found that they interacted specifically with ROP2 and ROP10 respectively.

Based on these results, the researchers constructed a mathematical model and performed a computer simulation with the assumption that the amount of PI (3,5) P2 on the side of the root hair regulates the cortical microtubule density and cell wall hardness. The model showed that when a force perpendicular to the direction of root hair growth (by the growth medium) is combined with a decreasing amount of PI (3,5) P2, the hair pushes out and becomes wavy.

"Our work shows that plants can push their root hairs into the soil by using PI (3,5) P2 to strengthen its sides," said Kumamoto University Associate Professor Takumi Higaki. "By artificially manipulating the amount of PI (3,5) P2 to create a plant with root hairs having enhanced lateral strength, it may be possible to develop plants that can efficiently absorb nutrients from soil with poor nutrients."

This research was posted online in "Nature Plants" on the 2nd of November 2018. 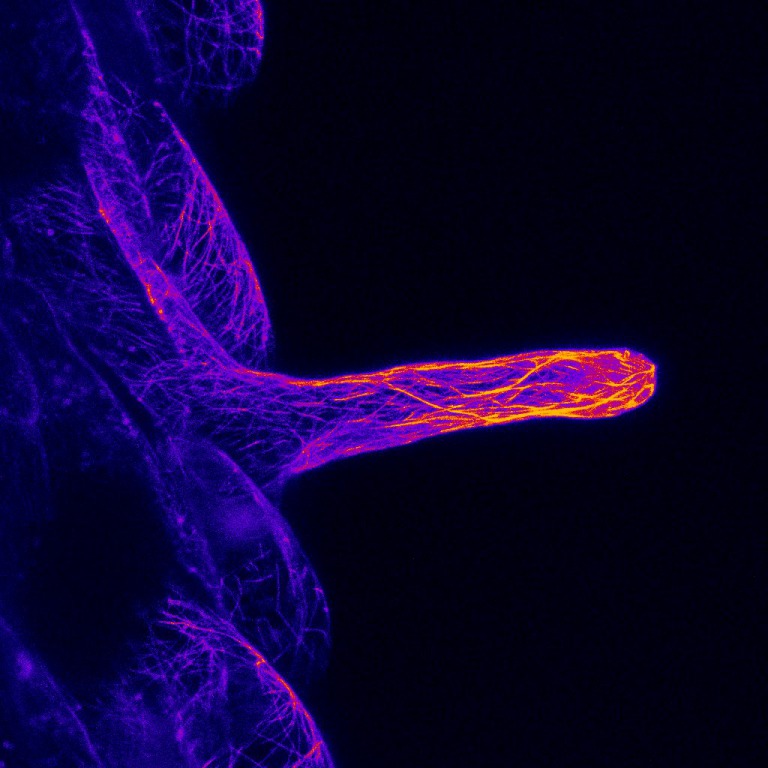 The interior pressure of the root hair forces it to extend outward. If the entire exterior of the root hair has uniform hardness, it will swell up like a balloon (left). To prevent this, a hard cell wall develops along the sides of the hair, while the tip remains relatively soft (right). 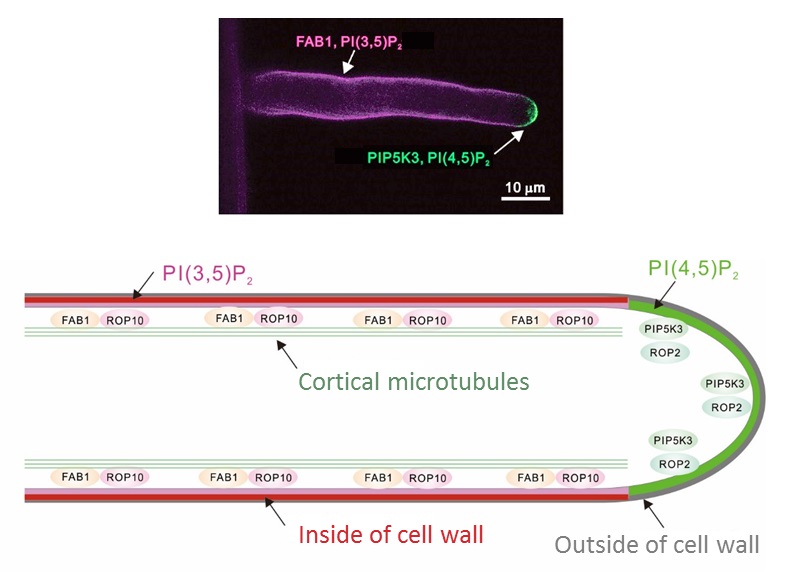 On the cell membranes along the side of Arabidopsis thaliana root hair, FAB1 cooperates with ROP10 to synthesize PI (3,5) P2. The synthesized PI (3,5) P2 stiffens the side of the root hair by controlling the elongation of surface microtubules and the secretion of the component that hardens cell walls.

[Image Details]
CREDIT: Dr. Masahiko Sato
USAGE RESTRICTIONS: This image may only be used in conjunction with the accompanying release, or stories written about the work described in the release with reference to the original work.