BACKGROUND
Osteoporosis is a disease that causes bones to fracture easily due to a reduction in both bone mass and quality. Aging is one of its leading causes, and it is estimated that around 200 million people are affected worldwide. Fractures of the femoral neck--the connection between the femur and the hip joint--or of vertebrae can leave a person bedridden which increases the need for care, reduces quality of life and systemic function, and increases mortality.

Bone is a living tissue that is repeatedly broken down (bone resorption) and remade (bone formation) little by little every day. If this balance collapses and bone resorption exceeds bone formation, bone density decreases and can lead to osteoporosis. Several medications are available to treat this disease, but the number of drugs that promote bone formation are far fewer compared to those that suppress bone resorption. The development of therapeutic agents that regenerate bones is highly desired.

Sirtuins are enzymes that play important roles in controlling aging, stress responses, various areas of the metabolism, and several other body functions. In mammals, there are seven types of sirtuins, SIRT1 to SIRT7. Although SIRT7 has been reported to be involved in cancer and lipid metabolism, its role in bone tissue and bone aging was unknown.

2. Expression of sirtuins in bone tissue of old mice
Reduced bone formation is common in people with osteoporosis, and the mechanism for this reduction is not well known. To clarify the mechanism, the researchers compared sirtuin (SIRT1, 6, and 7) expression in the skeletal tissue of young and old mice, and found that SIRT7 decreased with age. They then considered that this decrease in SIRT7 in the older specimens may be associated with decreased osteogenesis, and may even be a cause of osteoporosis.

The research group is confident that their results show a new mechanism for SIRT7 as a deacylating enzyme important for transcriptional activation of the gene expression regulator SP7/Osterix and is essential for osteoblast differentiation.

"In situations where SIRT7 does not work sufficiently, such as in an older individual, osteoblast formation is impaired due to low SP7/Osterix transcriptional activity. We believe that this decreased osteogenesis is associated with osteoporosis," said study leader Dr. Tatsuya Yoshizawa of Kumamoto University. "Our results, show that the regulatory pathway of SIRT7 - SP7 / Osterix is a promising target for new therapeutic agents to treat decreased osteogenesis and osteoporosis."

This research was published online in "Nature Communications" on 19 July 2018.

*The results of this research are based on collaborative research between Kumamoto University, Tsurumi University, Tokyo Medical and Dental University (Japan), and the Max Planck Institute (Germany). 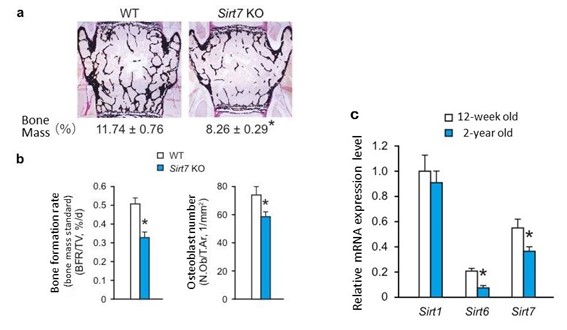 [Image 1 & 2 Details]
CREDIT: Dr. Tatsuya Yoshizawa
USAGE RESTRICTIONS: This image is available under the terms of the Creative Commons Attribution 4.0 License. Any further distribution of this work must maintain attribution to the author(s) and the title of the article, journal citation, and DOI. 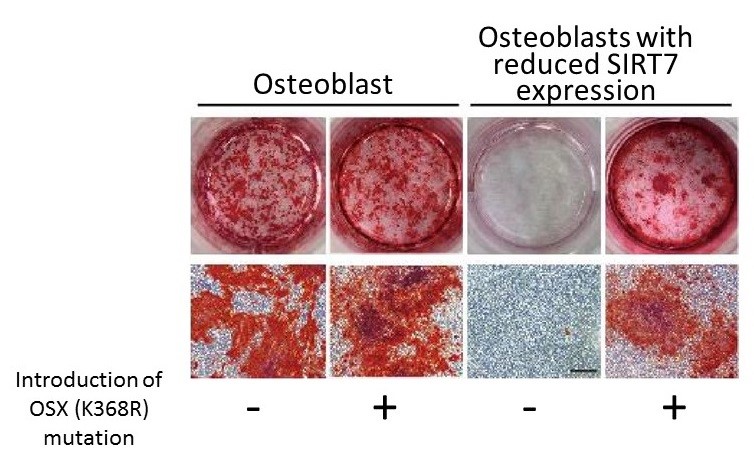 The effect of SIRT7 on osteoblast differentiation 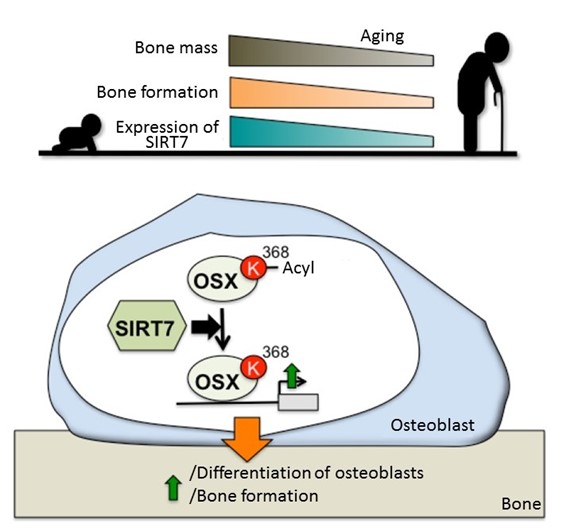 The mechanism of bone formation control by SIRT7

Caption:
When SIRT7 does not work sufficiently, as happens during aging, osteoblasts have difficulty producing bone due to low transcriptional activity of SP7/Osterix, which is thought to cause decreased osteogenesis associated with osteoporosis.


[Image 3 Details]
CREDIT: Dr. Tatsuya Yoshizawa
USAGE RESTRICTIONS: This image may only be used in conjunction with the accompanying release, or stories written about the work described in the release with reference to the original work.