Regulation of cell orientation and shape for tissue morphogenesis

A collaborative research group led by Kumamoto University has developed a new control system for regulating the morphology and orientation of cells that constitute animal tissues.

Cells that make up animal tissues must have proper form and an ordered arrangement. This behavior is determined by cell polarity where the opposite ends of a cell, such as up/down or front/back, have different properties. For example, the hair that grows on the surface of Drosophila (fruit fly) wings is aligned in a particular direction because it grows only from the outer part of each cell that forms the surface of the wing. This is called planar cell polarity (PCP).

Tissues will not form correctly if cell polarity formation is impaired, and malformation can lead to the development of various diseases. Furthermore, maintaining cell polarity is necessary for preserving tissue homeostasis. Failure of this mechanism can lead to carcinogenesis and malignant cancer.

Since the formation of cell polarity involves a change in cell morphology, it is necessary to change the dynamics of the structure that determines the morphology of the cell, the cytoskeleton. It is known that changes in the cytoskeleton dynamics are induced by intracellular messengers (signaling molecules) and it has been suggested that the cytoskeleton not only receives a signal at the time of kinetic changes, but may also produce feedback through some form of signal transduction. However, the mechanism linking cytoskeletal dynamics and the signaling mechanisms has not yet been clarified.

Furthermore, Map7/7D1/Ens showed planar-polarized distribution at the ovary/proximal side in epithelial cells of mouse oviducts and Drosophila pupal wings, respectively. Since the behavior and properties in cells (such as localization patterns and binding with Dvl/Dsh) are conserved, the researchers suggest that the functions of Map7/7D1/Ens are conserved and inherited similarly in many different species during PCP formation. They believe they have discovered a new control system for regulating the morphology and orientation of tissue cells.

This research was posted online in the journal "EMBO Reports" on 7 June 2018. 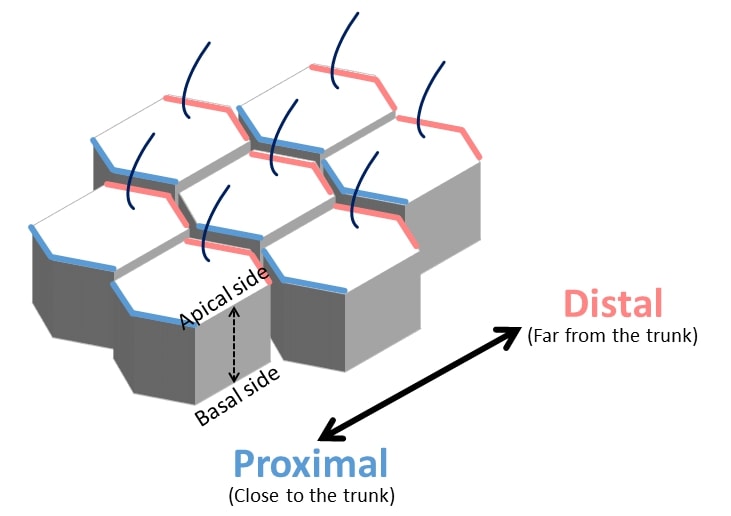 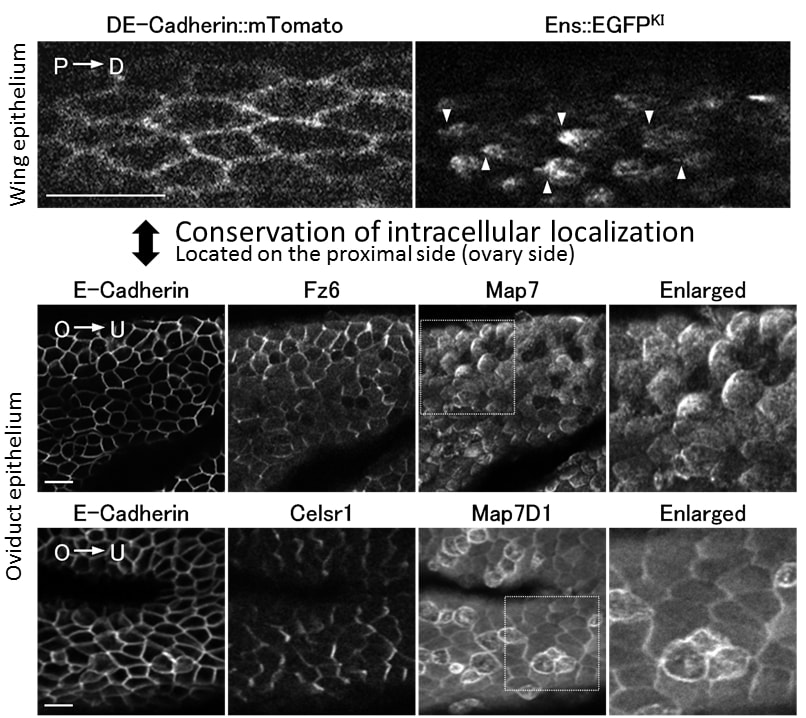 Caption:
Upper figure: The left image visualizes the cell boundary. Fluorescent protein (EGFP) was added to Ens by genome editing technology and visualized in vivo (right panel). In Drosophila, they found that Ens localized on the proximal side (P side) (arrowhead).
Lower figure: (From left to right) E-Cadherin visualizes the cell boundary [O: ovary (proximal) side, U: uterus (distal) side]; Fz6 & Celsr1: Constituent molecules of the Wnt/PCP signal; Map7/7D1 & Enlarged: In the mouse oviduct epithelium, Map7/7D1 is localized on the ovary (proximal) side. This is indicated by the left side of each cell appearing whiter than the right.

USAGE RESTRICTIONS: These images may only be used in conjunction with the accompanying release, or stories written about the work described in the release with reference to the original work.