Drug delivery systems (DDSs) control when and how much drugs are delivered to the body. Numerous DDS studies have been conducted but most have focused on treatments for cancer. New research from Kumamoto University uses a DDS to treat malaria.

The existing treatment for malaria is taken orally and has three main problems: (1) most antimalarial drugs are broken down in the stomach, (2) the drugs have strong side effects, and (3) the medicine stays in the body for only a short time. These issues resulted in malaria treatments that were not particularly effective.

MCM-41 is a porous silica material with a pore size of 20-30 nm. It can incorporate drugs into its pores, which makes it a useful material for DDS applications. A research group headed by Prof. Shinya Hayami from Kumamoto University, Japan believed that MCM-41 could be used as DDS for antimalarial drugs. To test their theory, they created a new DDS by combining the antimalarial drugs Artesunate and Quinine with MCT-41 and performed in vitro and in vivo experiments. As a result, they found:

(1) The release time of the antimalarial medicine became very long, one week or longer, which was an improvement from the standard medication time.

(2) Compared to ingesting Artesunate or Quinine, the new DDS increased treatment efficiency by 20 and 240 times respectively in animal experiments. (As defined in this study, the therapeutic efficiency is 50% of the effective dose (ED50), and is used as an index of drug strength. The smaller the value of ED50, the greater the action of the drug. In other words, if an effect is obtained with a small amount of a drug, the treatment efficiency is high.)

(3) MCM-41 itself is non-toxic and inactive. A DDS using MCM-41 is expected to have very weak side effects.

"Using this DDS for antimalarial drugs has introduced a new possibility for highly efficient malaria treatment for the first time," said Professor Shinya Hayami. "We expect that it will be put to practical use in areas where malaria treatment is still necessary. Now, we are planning to develop clinical trials for antimalarial drugs as well as new DDSs for other drugs, like anti-HIV medications."

This research was posted online in the journal "Scientific Reports" on 25 February 2018.

[Fund]
KAKENHI Grant-in-Aid for Scientific Research (A) JP17H01200. S.A.A. (P13340) is grateful to Japan Society for the Promotion of Science (JSPS) for the Postdoctoral fellowship support and Federal University of Agriculture, Abeokuta (FUNAAB) for the official release to utilize the fellowship.
[Image1] 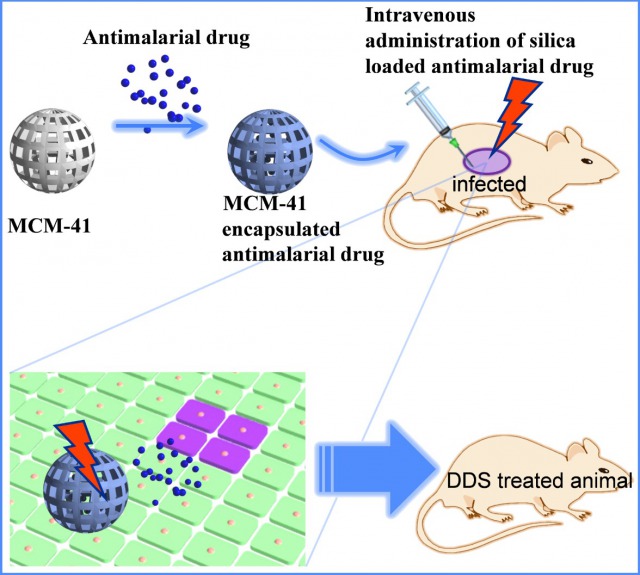 CAPTION:
Kumamoto University researchers found that using MCM-41 as a drug delivery system for malaria treatment produced a highly efficient treatment in animals. Clinical trials are planned in the near future.

[Image Details]
CREDIT: Prof. Shinya Hayami
USAGE RESTRICTIONS: These images may only be used in conjunction with the accompanying release, or stories written about the work described in the release with reference to the original work.