A main cause of COPD is cigarette smoke, and the global mortality rate for the disease now places it in third place. In Japan, the number of patients with COPD over 40 years old is estimated to be about 5.3 million people, making it a familiar disease with a high mortality rate. The onset and progression of the disease is caused by transporter proteins that allow ions to permeate ion channels into cells. COPD is thought to involve the overactivation of the epithelial sodium ion (Na+) channel (ENaC). CF, on the other hand, is a frequently occurring genetic disease in Western countries that is caused by genetic mutation of a chloride ion (Cl-) channel called the cystic fibrosis transmembrane conductance regulator (CFTR).

Excessive production of mucus-producing genes (such as MUC5AC) in the lungs has been known for some time to be important in the development of diseases such as COPD and CF. However, it was not clear why excessive production of these mucus genes occurs in these pulmonary diseases, particularly since they have such different causes, i.e., tobacco and heredity.

In breakthrough work, researchers of Kumamoto University, Japan have now made it clear that abnormalities of the ion channels ENaC and CFTR reduce the body’s ability to deliver zinc ions (Zn2+) to lung epithelial cells. (One of the zinc ion transporting factors, ZIP2, is an important mechanism for mRNA splicing to function correctly.) In addition, the researchers also revealed that COPD and CF lung epithelial cells have abnormalities in mRNA ligation, which, as a result, causes overproduction of mucous genes. In other words, the diseases developed due to an overproduction of mucus was, in turn, was caused by an insufficient zinc supply to lung epithelial cells.

In general, zinc is a very important element, not only for the lung but also for entire body. Until now, the importance of zinc in the lung was only understood from a nutritional aspect. The researchers believe that this discovery is the first in the world that clarifies how zinc is involved in the onset of pulmonary diseases, as well as its effects on the regulation of mRNA, one of the molecule responsible for life as we know it.

These results prove that there is abnormality in the zinc transport mechanism itself in obstructive pulmonary diseases. It also suggests that treatment for these diseases cannot be performed merely with zinc supplements. A therapeutic approach that takes the transport mechanisms into consideration is also necessary.

This research was posted online in the journal "EBioMedicine" on 20 December 2017. 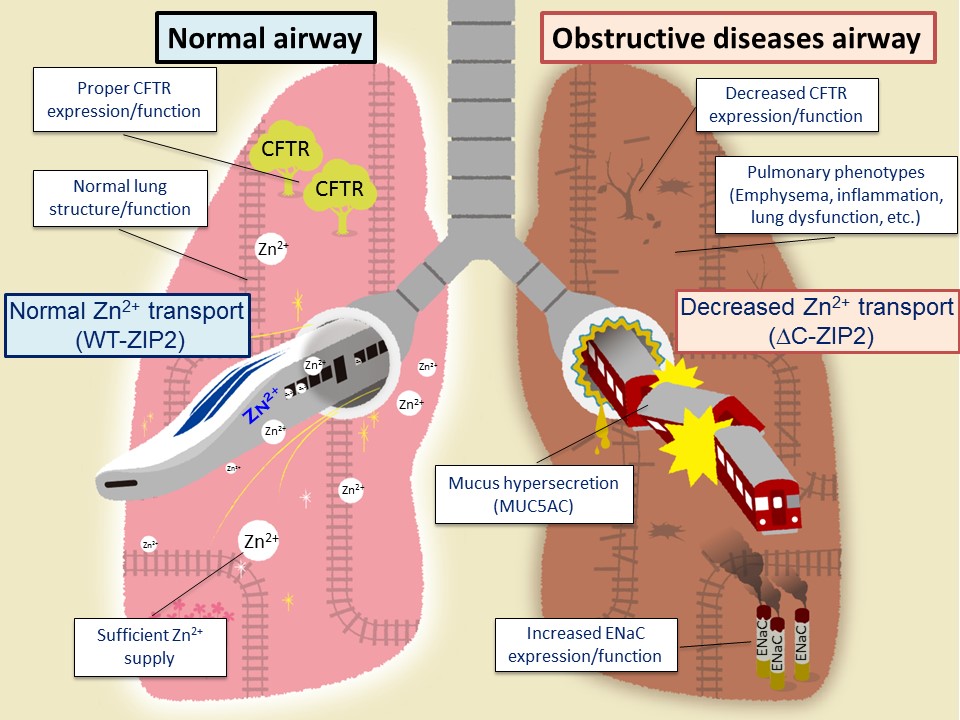 Normal lungs vs those with affected by obstructive disease 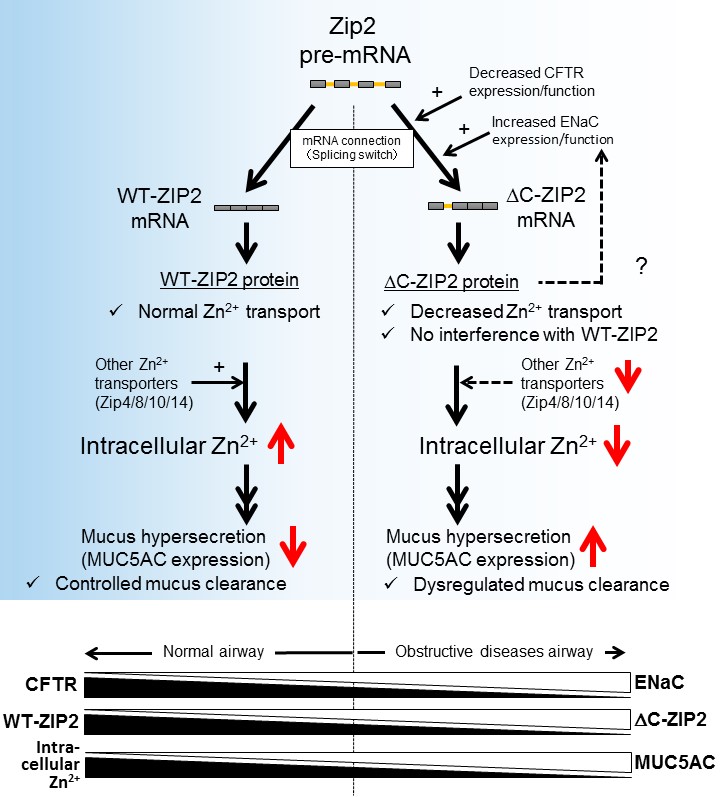 CAPTION:
Pre-mRNA undergoes mRNA splicing which “cuts out” the information necessary for protein synthesis. In obstructive pulmonary diseases (right side of figure) abnormalities occur during mRNA splicing and cause abnormal (hyper-) mucus secretion.

[IMAGE DETAILS]
CREDIT:  Associate Professor Tsuyoshi Syuto
USAGE RESTRICTIONS: This image may only be used in conjunction with the accompanying release, or stories written about the work described in the release with reference to the original work.