When and how were the first stars in the universe born? The Murchison Widefield Array (MWA) radio telescope, one of the largest of its kind, in the desert of Western Australia was constructed to help clarify this and many other mysteries. The MWA is an international radio-astronomy project conducted by seven countries including Japan and Australia. In Japan, Kumamoto University (main), Nagoya University, Kagoshima University, University of Tokyo, Tohoku University, and the National Astronomical Observatory of Japan are participating in the effort. Construction to increase sensitivity of the MWA began in 2016, and was completed in October of this year (2017). The antennas were doubled to 4,096 over a vast, five square km area which greatly improved the sensitivity of the telescope. The upgraded MWA will seek answers to mysteries of the universe that began 13.7 billion years ago.

However, since the signal from hydrogen gas of the ancient universe is very weak, a telescope with a wide area is necessary. With twice the number of antennas over four times the area of its previous incarnation, the MWA has greatly improved its sensitivity and image quality. It is now possible to observe much more detailed structures of the universe and the search for the first stars is underway. Furthermore, cooperative observation with the Japanese Subaru telescope in Hawaii is also planned. That collaboration will further explore the mysteries from 100 million to 1 billion years after the universe began.

Images of the MWA expansion and resulting images may be found in the following public DropBox folder.
https://www.dropbox.com/sh/w43wl3nqop86576/AACSPp08Vl_SGBPqkiVKt7Nva?dl=0 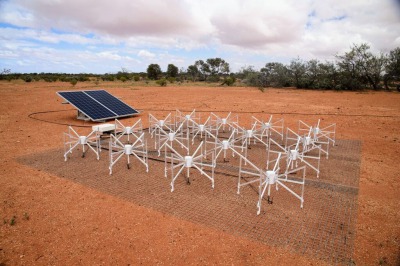 An antenna unit of the Murchison Widefield Array (MWA) in Australia

CAPTION:
A total of 4,096 antenna units are installed in the desert area of Western Australia. Sixteen units, like the one in the picture, are considered one antenna unit.

CAPTION:
The left image was taken before the expansion of the MWA, and the right was taken after expansion. Much more precise images can now be produced.

[IMAGE DETAILS - ALL]
CREDIT: Curtin University
USAGE RESTRICTIONS: This image may only be used in conjunction with the accompanying release, or stories written about the work described in the release with reference to the original work.