Heart disease is the leading cause of death in the world, and the majority of those deaths are caused by heart failure and acute myocardial infarction. In the past, angiotensin converting enzyme inhibitors (ACE inhibitors) or Angiotensin II Receptor Blockers (ARBs) were used in combination with other drugs as the initial therapy for heart failure and acute myocardial infarction. ACE inhibitors and ARBs both inhibit the system responsible for regulating blood pressure, the Renin-Angiotensin-Aldosterone System (RAAS), which causes high blood pressure when it becomes overactive.

LCZ696 is a novel drug that combines Valsartan, a traditional antihypertensive drug, and Sacubitril, which has an organ-protective effect. Sacubitril inhibits neprilysin which decomposes hormones secreted mainly from the heart called Atrial Natriuretic Peptide (ANP), and B-type Natriuretic Peptide (BNP). A 2014 large-scale clinical trial of patients who had chronic heart failure with reduced ejection fraction (the percentage of blood exiting the heart at each contraction) reported that the number of cardiac deaths and re-hospitalizations due to heart failure was reduced significantly with LCZ696 treatment than with existing ACE inhibitors. LCZ696 is now widely used in Europe and the United States as the first treatment for chronic heart failure.

The day after the myocardial infarction model mice were created, they were divided into groups that (1) did not receive any treatment (control group), (2) received an ACE inhibitor, and (3) received LCZ696. The researchers found that the mortality rate due to cardiac rupture occurring within one week after myocardial infarction was significantly lower in the LCZ696 treatment group than in the other two groups. Gene expression in the area of myocardial infarction was analyzed to investigate the mechanism that LCZ696 could inhibit cardiac rupture. The researchers found that the expression of genes involved in inflammation-related cytokines (IL-1β, IL-6) and in tissue degrading MMP-9 was clearly reduced in the LCZ696 treatment group. An increase in the function of the MMP-9 gene is known to be related to the cause of cardiac rupture.

In addition, microscopic observations of the pathological tissue of the heart showed that the number of inflammatory cells was unchanged in all groups, but the activity of MMP-9 was clearly lowered in the LCZ696 treatment group. Furthermore, in experiments using cultured mouse macrophages, researchers confirmed that the inflammation action of cytokines and MMP-9 can be more suppressed using LCZ696 rather than using valsartan or sacubitril by themselves.

“This improves a patient’s prognosis by suppressing cardiac rupture,” added Associate Professor Koichi Kaikita. “In the future, it is expected that LCZ696 will be used not only to treat chronic heart failure but also as therapy after acute myocardial infarction."

This research result was presented at the Hot Line of the European Cardiology Society held in Barcelona, Spain, on 26-30 August, 2017, and posted on-line in the "JACC; Basic to Translational Science" on 28 August 2017.


[Fund]
This study was supported in part by Novartis Pharma AG 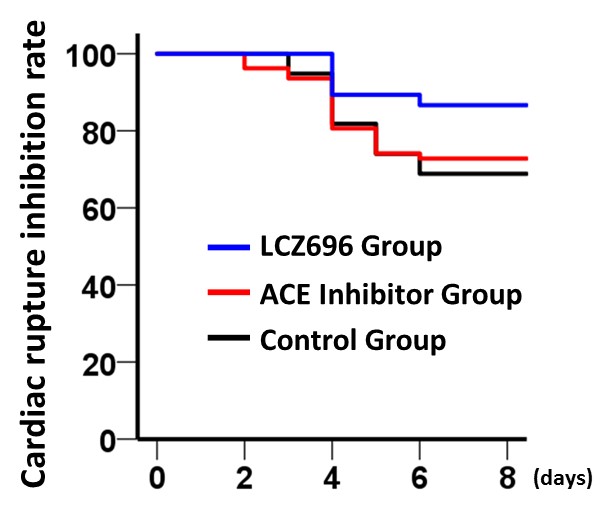 Survival curve
CAPTION: The mortality rate due to cardiac rupture after acute myocardial infarction is lower in the LCZ696 treatment group.

<For both images>
[CREDIT] Dr. Masanobu Ishii and Associate Professor Koichi Kaikita
[USAGE RESTRICTIONS] This image may only be used in conjunction with the accompanying release, or stories written about the work described in the release with reference to the original work.