Anticoagulants used for arrhythmia can have different thrombus formation rates

Anticoagulants are recommended for atrial fibrillation due to the high risk of stroke. However, bleeding complications can occur as a side effect. Researchers in Japan examined several types of anticoagulants and found that the rates of thrombus formation are different according to the type of drug. This difference may be related to the risk of side effects, especially intracranial bleeding.

Atrial fibrillation is an arrhythmia signified by rapid and irregular beating of the upper chambers of the heart (atria). Anticoagulant therapy is recommended for atrial fibrillation because thrombi formed by stagnated blood in the atrium can cause stroke. In addition to the conventional anticoagulant warfarin, direct oral anticoagulants (DOACs) have become widely used. DOACs can selectively inhibit coagulation factors, whereas warfarin cannot.

To clarify these mechanisms, researchers from Kumamoto University, Japan used a Total Thrombus-Formation Analysis System (T-TAS) to analyze on- and off-treatment blood samples from 120 patients who underwent catheter ablation for atrial fibrillation and who were taking warfarin or DOACs. The T-TAS is a device that can monitor thrombus formation by using a microchip mimicking blood vessels, a pump that circulates collected blood, a pressure sensor, and a video microscope. The characteristic features of this device are that it only requires a small blood sample volume (500 μL) for analysis and that collected blood can be measured easily without any complicated pretreatment. With the T-TAS, it is possible to observe the thrombus formation as the blood flows into the obstructed-blood-vessel microchip model, and quantitatively evaluate the speed and volume of thrombus formation.

Twenty-nine patients were treated with warfarin, 19 with dabigatran, 47 with rivaroxaban, and 25 with apixaban; the latter three being DOACs. The T-TAS analysis showed that the level of anticoagulation for patients on-treatment decreased by the same degree in all groups compared to those off-treatment, indicating that all of the anticoagulants were working sufficiently.

However, when observing thrombus formation over time with a microscope, the researchers found that thrombi adhering to the wall of the obstructed-blood-vessel microchip thickened earlier in the rivaroxaban and apixaban groups compared to those in the warfarin group. These DOACs can prevent stroke as well as warfarin. However, this observation suggests that DOACs may promptly form thrombi at the site of a vessel injury should one occur.

"We found that thrombus formation varies according to the type of drug even though the final anticoagulant effect is similar between warfarin and DOACs,” said study leaders, Dr. Masanobu Ishii, and Associate Professor Koichi Kaikita of Kumamoto University. “Our work may help to clarify the differential mechanism between warfarin and DOACs for the prevention of intracranial bleeding. In the future, we hope our research can be used to effectively select medicines that suppress anticoagulant side effects."

This finding was posted online in "Scientific Reports" on 7 August 2017. 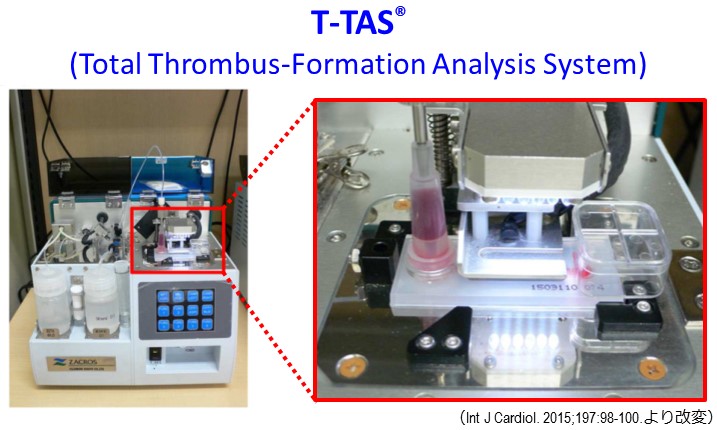 The Total Thrombus-Formation Analysis System (T-TAS®)
CAPTION: The T-TAS a device that can monitor thrombus formation on a microchip. Kumamoto University researchers used it to analyze on- and off-treatment blood samples to determine differences between anticoagulants. 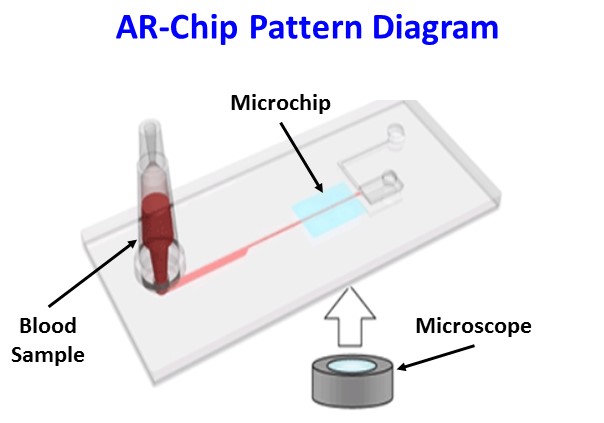 Thrombus formation as viewed in a T-TAS
CAPTION: Both conventional and direct oral anticoagulants (DOACs) are effective, but DOACs are shown here to form thrombi faster than warfarin. It is thought that the faster formations would occur at the site of blood vessel injury.

<For all 3 images>
[CREDIT] Dr. Masanobu Ishii and Associate Professor Koichi Kaikita
[USAGE RESTRICTIONS] This image may only be used in conjunction with the accompanying release, or stories written about the work described in the release with reference to the original work.