Japanese researchers have succeeded in deriving a theoretical formula that quantitatively predicts the wetting and spreading behavior of droplets that collide with the flat surface of a solid material. Although the behavior of droplets colliding with a solid surface looks simple superficially, it is actually quite complicated due to various factors which influence each other such as surface roughness, fluid motion, and wettability (ease of liquid adherence) of the solid surface by the liquid. In the past, researchers from all over the world have attempted to make quantitative predictions about the extent of wetted areas through experimentation, theory, and numerical analysis, but prediction, particularly during slow speed collisions, have not yet been realized.

Droplet collisions on solid surfaces is an important phenomenon for many industrial applications like ink jet printers, fuel injectors, and spray cooling. The maximum wetting and spreading area of droplets after collision is one of the most important parameters that influences the quality and efficiency of such equipment.

The maximum wetting and spreading area of a droplet also varies depending on the nature of the droplet, the speed at which the droplet strikes, and the nature of the solid upon which it strikes. For example, when a droplet collides with glass or Teflon, the maximum wetting and spreading area will be different. The ease with which a liquid adheres to a surface depends on the surface wettability. The wettability of droplets adhering to a solid surface is characterized by the tangential dynamic balance equation (Young equation) at the contact line. Elements normal to the solid surface are ignored, since it is thought that they are balanced by reaction forces with the solid.

In previous theoretical studies on the maximum wetting and spreading area of collision droplets, only the balance equation of the contact line in the tangential direction was considered. There were no relational expressions to predict the maximum wetting and spreading area of a droplet under a wide range of impinging velocity conditions. Typically, two methods are used to make calculations, one when collision speeds are high and another when speeds are low. However, the conventional method used for high speed collisions generates large errors at low speeds and the conventional method used for low speed collisions returns large errors at high speeds.

To reduce calculation errors, a collaboration between Kumamoto University and Kyoto University researchers focused on what had yet to be studied in detail, the normal surface tension on the contact line and the energy balance of droplets colliding with solid surfaces. While doing so, they considered the disadvantages of using conventional methods for evaluating the viscous dissipation of energy caused by fluid motion inside a droplet at the time of collision, and derived a new theoretical formula.

The newly derived theoretical formula gives the possibility of quantitatively predicting the maximum wetting and spreading area when droplets collide with various types of solids, such as silicone rubber or super water repellent substrates. Furthermore, the researchers confirmed that it can be applied not only to milli-size but also to micro-size droplets.

"Recently, nanoscale circuit fabrication technology for semiconductor substrates using inkjet technology has attracted much attention,” said Tenure Track Assistant Professor Yukihiro Yonemoto of Kumamoto University, who leads the study. “Observations of nanoscale phenomena, however, require expensive experimental equipment, and prediction by numerical analysis requires specialized technology. By using a simple method to predict the maximum wetting spreading area of a droplet after collision, we can expect to realize more efficient circuit designs among other things." Droplets that strike the surface of a flat solid material will not only stretch and spread, but will also split into finer droplets (splash phenomenon) if the energy at the time of a collision is large. Researchers at Kumamoto University and Kyoto University are currently working on a theory that considers these phenomena to further extend the results of their research.

This finding was posted online in the open access journal "Scientific Reports" on 24th May 2017. 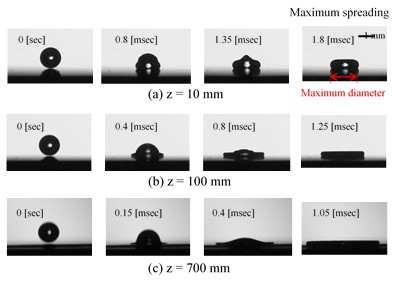 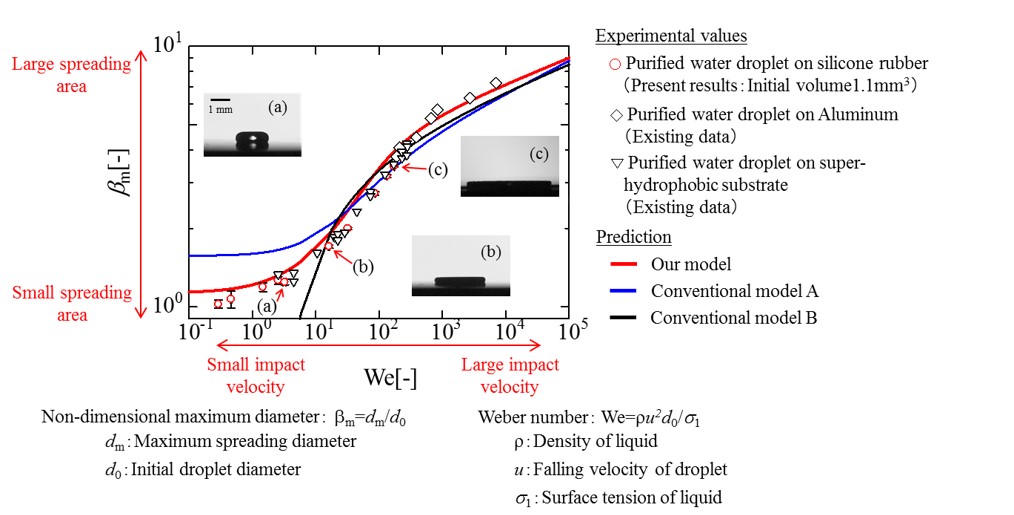 Maximum spreading diameter (βm) vs parameter related to impact velocity (We)
CAPTION: Plot showing the effectiveness of a new theoretical model for predicting the area of spread of a water droplet on a solid surface in comparison with previous conventional models.

[Usage Restrictions]
This image may only be used in conjunction with the accompanying release, or stories written about the work described in the release with reference to the original work.