Identification of histone and transcriptional regulation in vessel differentiation

Clarification of how human blood vessels are constructed is desperately needed to advance regenerative medicine. A collaborative research group from Kumamoto University, Kyoto University, and the University of Tokyo in Japan investigated the changes in gene functions that occur when stem cells become vascular cells. They found that the histone code, which alters the transcriptional state of the gene, changes over time as stem cells differentiate into blood vessels in response to a stimulus. Furthermore, they found that a transcription factor group essential for blood vessel differentiation (ETS/GATA/SOX) has a previously unknown role.

Regenerative medicine has made remarkable progress due to research with embryonic stem (ES) cells and induced pluripotent stem (iPS) cells. However, the mechanism of how blood vessels are constructed from these undifferentiated cells has not yet been clarified. During the creation of new blood vessels, the vascular endothelial growth factor (VEGF) protein differentiates stem cells into vascular endothelial cells and stimulates them to create new blood vessels. Researchers at Kumamoto University added VEGF to undifferentiated ES cells and tracked the behavior of the entire genome and epigenome changes over time in vitro.

Using ES cells developed at Kyoto University's Institute for Frontier Medical Sciences, the research group collected RNA and histones of each cell immediately after VEGF stimulation (0 h), before differentiation (6 h), during differentiation (12 - 24 h), and after differentiation (48 h). They then comprehensively analyzed the changes in the whole genome and epigenome using next generation deep sequencing.

It is expected that the knowledge of the functions of these transcription factors, when combined with gene editing techniques, will allow for the efficient regeneration of blood vessels.

This finding was first reported in "Nucleic Acid Research" on March 17th, 2017. 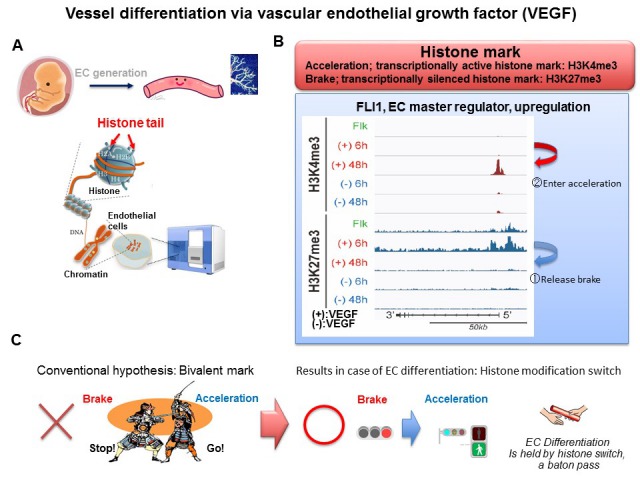 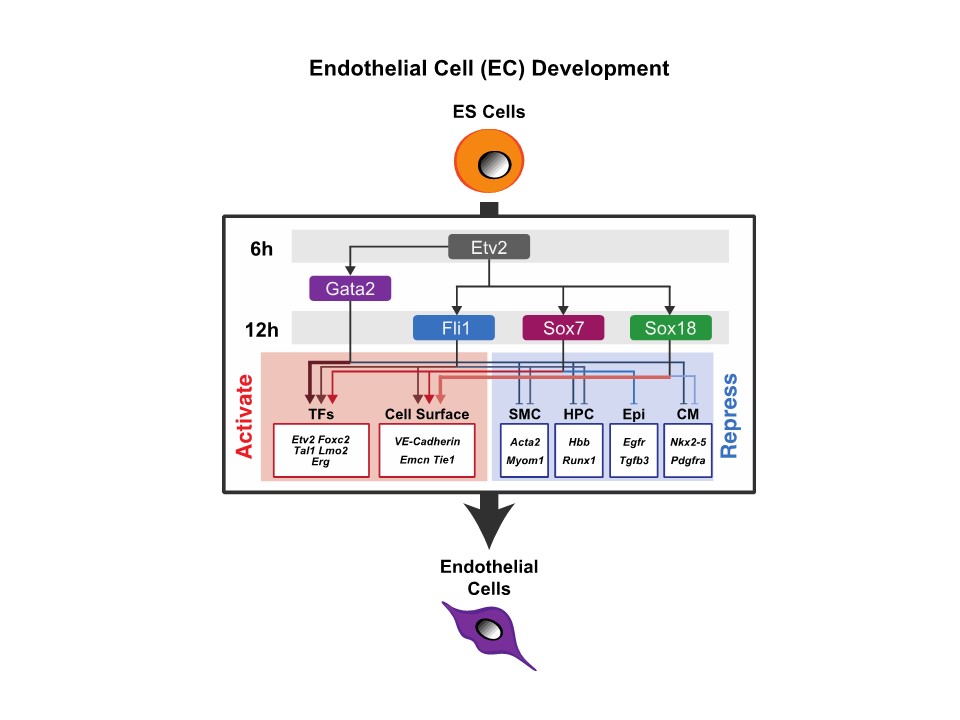 CREDIT: Professor Takashi Minami
USAGE RESTRICTIONS: This image may only be used in conjunction with the accompanying release, or stories written about the work described in the release with reference to the original work.