As an alternative to liquid fossil fuels, biodiesel extracted from microalgae is an increasingly important part of the bioenergy field. While it releases a similar amount of CO2 as petroleum when burned, the CO2 released from biodiesel is that which has recently been removed from the atmosphere via photosynthesis meaning that it does not contribute to an increase of the greenhouse gas. Furthermore, research has shown that microalgae produces a much higher percentage of their biomass to usable oil in a significantly smaller land mass than terrestrial crops. Currently, one of the largest obstacles in replacing diesel with biodiesel is the cost of production. Fossil fuels are still cheaper than biofuels so improvements in production efficiency are highly sought-after.

Recently, efforts have been made by researchers in Japan to reduce the cost of biodiesel production by using pulsed electric fields (PEF) to extract hydrocarbons from microalgae. A milli- or microsecond PEF is typically used to weaken cell walls and increase permeability allowing for extraction of elements inside the cell. Kumamoto University researchers, on the other hand, used a nanosecond PEF (nsPEF) to focus on the microalgae matrix instead of the cells. A nsPEF generally uses less energy than the μs/msPEFs even at high voltages, and is not as destructive or costly as the traditional drying method of oil extraction.

The researchers performed several tests with the nsPEF on the microalgae Botryococcus braunii (Bb) to determine the optimal electric field, energy, and pulse repetition frequency for hydrocarbon extraction. Interestingly, it was found that doubling the energy only resulted in a 10% increase in hydrocarbon extraction. At 10 Hz, the optimal field and energy conditions were determined to be approximately 50 kV/cm and 55.6 J/ml respectively per volume of algae. Further, the researchers found that pulse frequency had little to no effect on extraction percentage, meaning that a large amount of hydrocarbons may be extracted quickly for large/industrial systems.

"The advantage with this extraction mechanism is that it separates hydrocarbons from a matrix, rather than extracts them from cells. Other microalgae do not secrete a matrix so the cell membranes must be damaged or destroyed to get at the hydrocarbons, which both takes more energy and is less efficient than our method," said lead researcher, Professor Hamid Hosseini of the Institute of Pulsed Power Science at Kumamoto University. "On top of that, many extraction processes practiced today use a drying method to extract oil which ends in the destruction of the algae. Our method is relatively non-destructive and the microalgae are able to rebuild their colonies after extraction has finished."

One minor drawback is the impurity of the matrix; polysaccharides must be purified from the extracted hydrocarbon solution. Fortunately, these molecules may be used in the creation of bioethanol but their concentration is low.

It is hoped that this technology will improve biofuel production as an appropriate green energy source.

This work may be found in the online BioMed Central journal, Biotechnology for Biofuels. 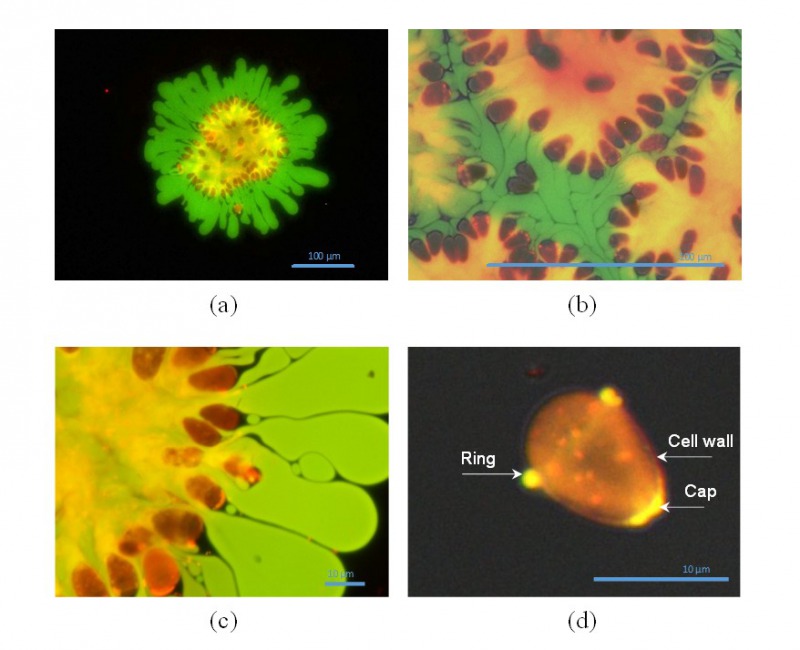 [Image details]
CREDIT: Professor Hamid Hosseini
USAGE RESTRICTIONS: This image may only be used in conjunction with the accompanying release, or stories written about the work described in the release with reference to the original work.