The mechanical properties of cells have an impact on biological processes ranging from wound healing and disease to cellular aging and differentiation. Currently, the most popular method of measuring the mechanical properties of a cell is by atomic-force microscopy (AFM). Very simply, AFM works by moving a very fine needle attached to a cantilever beam across the sample surface, and the deflection of the beam is measured directly with a laser. Very high resolution (< nanoscale) measurements are possible with this method, and it is used for imaging, force measurement, and fine manipulation.

AFM and other tools used to measure the properties of small-scale biological samples have been improving, but they are still expensive, difficult to use (even for experienced users), and often damage the cells being analyzed. For these reasons, researchers from Kumamoto University, Japan created a new device to easily evaluate the mechanical properties of cells. Their cell compression microdevice is cheaper and easier to use than other tools. It uses a very thin and soft diaphragm for cell compression making it minimally invasive, and it allows for real-time observation of cell compression. In their most recent research project, they examined the effectiveness of the microdevice by calculating the Young's modulus (also known as the elastic modulus) of osteoblasts and comparing the measured values with those reported using other methods.

Cell deformation was evaluated after 30 seconds of compression from a digital image taken by a CMOS camera. Compression was performed by applying air pressure to the diaphragm of the microdevice in 0.5 MPa intervals, and measurements were taken from 0 to 2.0 MPa. The researchers estimated the Young's modulus of the osteoblasts by dividing the applied pressure by the rate of deformation and found that their results (Young's modulus ≈ 3.5 - 4.2 kPa) corroborated previous findings.

"Other researchers have reported a Young's modulus anywhere from 1.0 - 2.0 kPa for osteoblasts to 4.0 - 200 kPa for bone marrow stromal cells, which is comparable with our results," explained Associate Professor Yuta Nakashima, leader of the research project and inventor of the microdevice. "It should be noted, however, that evaluating the Young's modulus one-dimensionally, as our method does, leaves some room for error since the true Young's modulus is likely not uniform for the spherical cell. Our measurements might be more accurately referred to as the apparent Young's modulus."

This research may be found online in ScienceDirect's “International Journal of Engineering Science.” 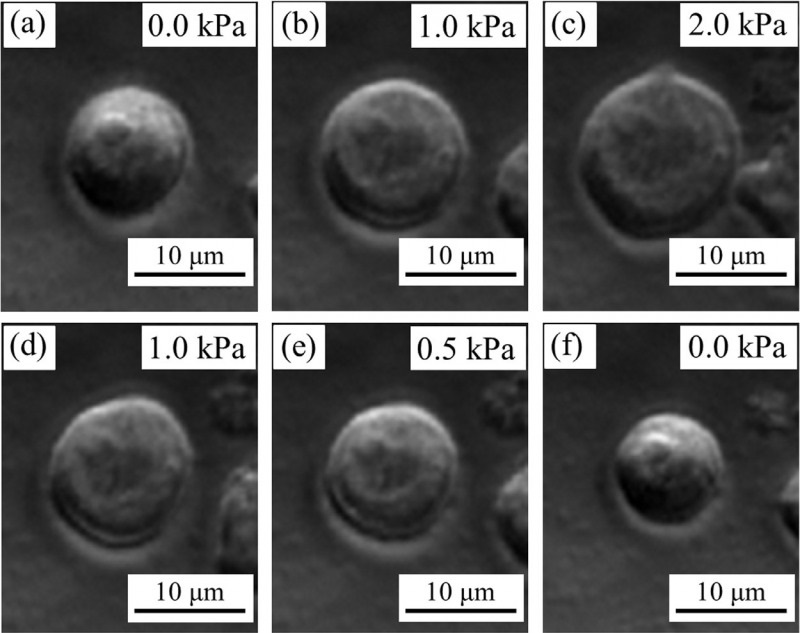 The cell compression microdevice developed by Associate Professor Nakashima from Kumamoto University, Japan is cheaper, easier to use, and less invasive than current methods of measuring the mechanical properties of a cell. This image is a time-lapse of a cell under compression in the microdevice.
Image reprinted from Tairo Yokokura, Yuta Nakashima, Yukihiro Yonemoto, Yuki Hikichi, and Yoshitaka Nakanishi. Method for measuring Young's modulus of cells using a cell compression microdevice. International Journal of Engineering Science, 114():41-48, 2017. DOI: 10.1016/j.ijengsci.2017.02.002 with permission from Elsevier.