During cellular division, copies of DNA are divided and separated into two daughter cells. This is known to be triggered by the phosphorylation of certain proteins within the cell. In an effort to control cell division, recent research from a collaboration between scientists in Japan and the UK has successfully created an artificial “switch” that manipulates the phosphorylation process.

When cells divide and proliferate, it is important for DNA to duplicate and separate evenly into the new daughter cells. If the DNA is split before copying is finished, the part of DNA that was not copied will be transmitted to only one of the daughter cells, and the cell with incomplete DNA cannot function normally. This process suggests that cellular division has some kind of trigger to differentiate between the DNA synthesis phase and the cell division phase.

The major factor triggering the cell division phase is the phosphorylation of about one thousand kinds of proteins. This phosphorylation rarely occurs in the synthesis phase, and must be turned on and off—like a switch—to shift between the synthesis phase and the division phase. Although it is known that this switch incorporates the enzymes CDK and PP2A, which work to precipitate and remove phosphorylation respectively, the mechanism that causes the balance of both enzymes to sharply reverse had not yet been clarified.

Normally, in order to investigate which protein produces a particular function, a subtractive approach is used. This method inhibits the function of a specific protein out of tens of thousands of proteins within a cell and estimates the effects by observing the resultant cells. However, due to the enormous variety of proteins, not all involved proteins can be found. Hence, the adoption of the addition method.

"By selecting and combining different combinations of eight proteins related to CDK and PP2A, we eventually succeeded in creating, in vitro, the switch found in cell division," said Associate Professor Satoru Mochida, who led the study. "This additive approach, called in vitro reconstitution, combines proteins that are thought to be involved in the target function, in this case the cell division switch, and confirms whether the target function works only with those proteins. Since it is very simple compared to experiments that use the cell itself, it is possible to clarify the causal relationship between the function of each protein and the result."

It was made clear that the essence of the mechanism involved in creating the cell switch is caused by a combination of proteins, including CDK and PP2A, which work alternately to regulate phosphorylation. Similar to an electric light switch, the increase/decrease of phosphorylation suddenly changes after crossing a certain threshold. This research has produced an extremely rare look at a specific cell mechanism, the in vivo reconstruction of the cell switch, and may increase our ability to control cells in the future. The results have brought us one step closer to understanding the very basics of life.

These finding may be found online in the journal "Current Biology". 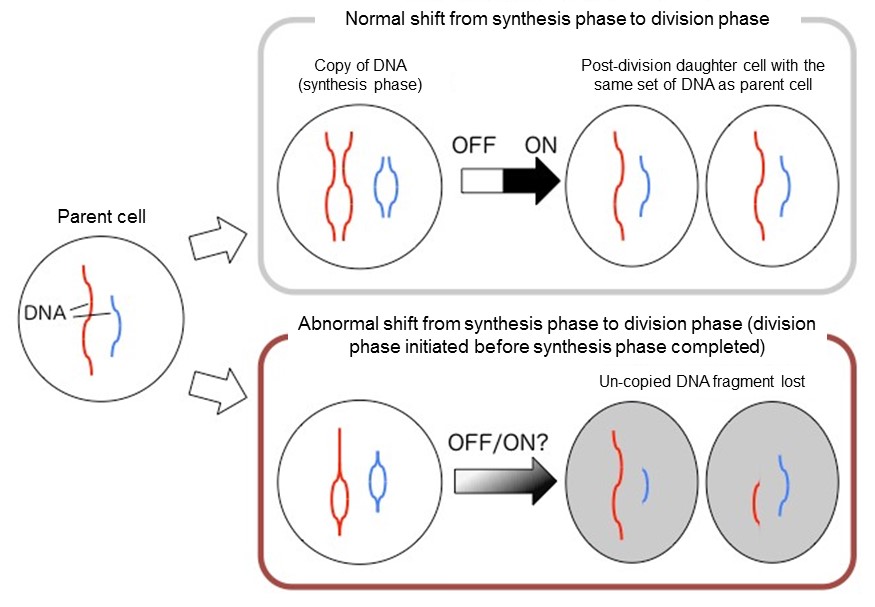 CDK to PP2A switch with verification
(Left) Switch path for linking CDK and PP2A. Since CDK and PP2A are complexes composed of three proteins, there are eight kinds in total. (Center) Threshold confirmed by in-vitro reconstitution. (Right) Mathematical analysis verifying that the threshold could be reached. 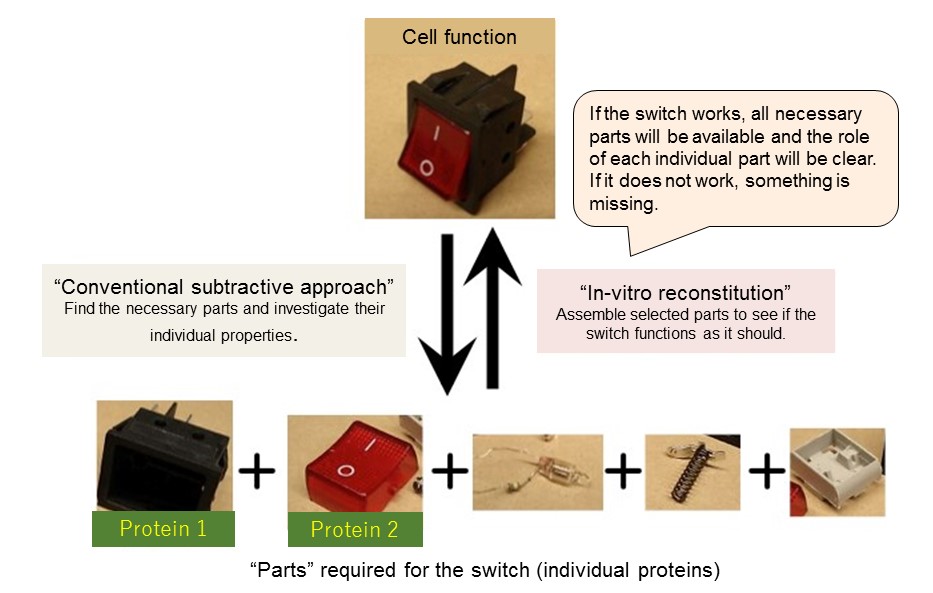 [USAGE RESTRICTIONS] This image may only be used in conjunction with the accompanying release, or stories written about the work described in the release with reference to the original work.