An enzyme that blocks cellular senescence and its mechanisms has been discovered by a research team from Kumamoto University, Japan. They found that a reduction of the enzyme SETD8, which regulates cell proliferation and gene function, results in the promotion of cell aging features.

Senescent cells have a hypertrophied and flattened morphology, and lose their proliferative capacity. In recent years, it has been discovered that senescent cells secrete a variety of proteins which sometimes promote chronic inflammation as well as cancer development by acting on the surrounding cells. Since senescent cells are more active than expected, cellular senescence is considered to be the cause of the aging phenomena for the whole body. For example, it has been reported that when senescent cells of old mice are eliminated, whole body aging can be suppressed. In other words, if we can adjust cellular senescence, whole body aging may be controlled.

The team from Kumamoto University has been researching the mechanisms of cellular senescence from the viewpoint of epigenetics, a research field that studies the changes in gene expression by molecular modifications. They screened for factors related to the senescence of cultured human fibroblasts (cells in connective tissue which aid in cell proliferation, differentiation, and repair) by using various cell- and gene-mediated analyses. They discovered that the enzyme SETD8 methyltransferase, which adds methylation on histone H4 lysine 20 (H4K20), regulates senescent features.

Normal cells stop proliferation after dividing many times (replicative senescence), and when oncogenes are activated for cancer initiation, senescence occurs to prevent it (oncogene induced senescence). In the past, SETD8 was reported to regulate cell proliferation and gene function via H4K20 mono-methylation, but its relation to cellular senescence was unknown. The researchers, however, found that SETD8 decreased markedly in senescent cells. When they performed a gene knockdown experiment (using RNA interference) to suppress the function of SETD8 in fibroblasts, cellular senescence was induced with typical features. Furthermore, using a drug that inhibits the enzyme activity of SETD8, similar senescent cells appeared. In other words, SETD8 plays a role in preventing cellular senescence.

The researchers then comprehensively analyzed all gene expression in senescent cells with decreased SETD8. The results showed that the expression of genes involved in cellular senescence had increased, particularly the genes for ribosomal proteins and ribosomal RNAs responsible for cellular protein synthesis, and the genes of proteins that inhibit cell proliferation. This shows that a loss of SETD8 augments protein synthesis and growth arrest in senescent cells via gene regulation.

Senescent cells need large amounts of energy to maintain cellular functions such as protein synthesis and secretion. The researchers previously reported that energy production in mitochondria is markedly increased in senescent cells (Takebayashi et al. Aging Cell, 2015). Now, researchers have found that the activation of mitochondria is regulated by SETD8, and microscopic observations confirmed that the nucleolus and mitochondria were remarkably developed in SETD8 depleted cells. Therefore, cell senescence and its corresponding metabolic activities are promoted by a decrease in SETD8.

This research reveals that SETD8 protects against cellular senescence. It is expected that this result will be useful for understanding the mechanisms of senescence and developing a way to control cell aging.

This finding was first reported in "Cell Reports" on February 28th, 2017. 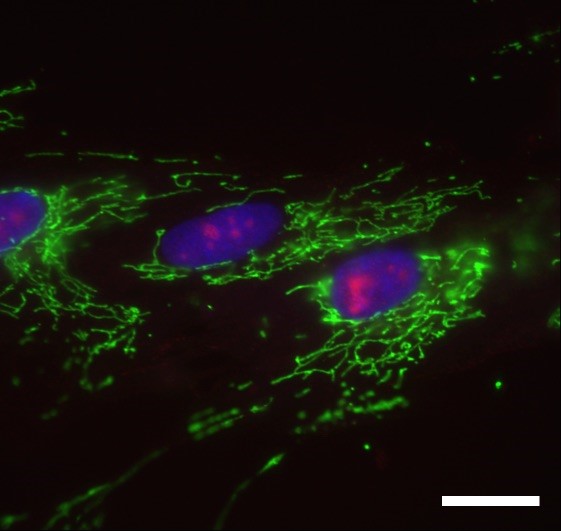 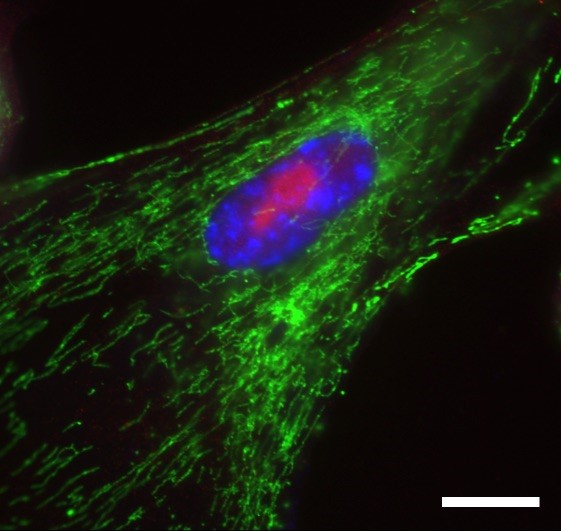 
CREDIT: Professor Mitsuyoshi Nakao
USAGE RESTRICTIONS: This image may only be used in conjunction with the accompanying release, or stories written about the work described in the release with reference to the original work.