A type of bacterium usually found in the human mouth, Fusobacterium nucleatum (F. nucleatum), has been found to be related to the prognosis of esophageal cancer in Japanese patients by researchers from Kumamoto University, Japan. The bacteria are a causative agent of periodontal disease and though it can be found among the intestinal flora, it hasn’t been the focus of much research until now.

There are hundreds of intestinal bacteria species numbering around 100 trillion in the human body and they play an important role in maintaining homeostasis. Recently, intestinal bacterial flora has been gaining the attention of researchers due to its association with various cancers, diabetes, obesity, inflammatory bowel disease, and nonalcoholic fatty liver disease. A well-known example of this is Helicobacter pylori, a bacterium residing in the stomach, which has been linked to stomach cancer.

It was recently reported that F. nucleatum was frequently detected in colon cancer tissue, and that it may have an effect on the development of colorectal cancer. This led researchers at Kumamoto University to suspect that F. nucleatum also played an important role in esophageal cancer, due to the proximity of the oral cavity to the esophagus, so they began researching that possibility.

The researchers further analyzed differences in the genes of patients with esophageal cancer using RNA extracted from the tissues of F. nucleatum positive and negative esophageal cancers. They found that a group of genes related to inflammatory cytokines (proteins that promote inflammation) was different in patients with F. nucleatum positive esophageal cancer. Detailed analysis of these data revealed that the number of genes of specific chemokines (proteins related to the transport of white blood cells, such as CCL20 and CXCL7) had increased.

"This study suggested that the oral cavity bacterium F. nucleatum may be involved in the development and progression of esophageal cancer via chemokines," said Professor Hideo Baba, who lead the research. "It should be noted that it is still unknown whether F. nucleatum itself causes esophageal cancer. Further analysis by more institutions, preferably world-wide, is desired since intestinal flora differs between individuals. In future research, after elucidating the role of F. nucleatum in esophageal cancer development in more detail, we should be able to develop new drugs to better treat this form of cancer."

This finding was posted on line in "Clinical Cancer Research," on October 21st, 2016. 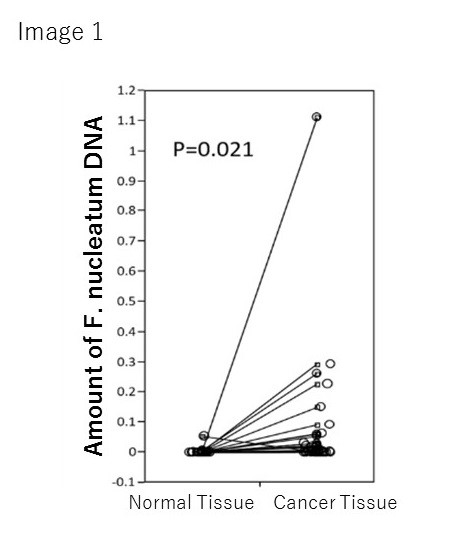 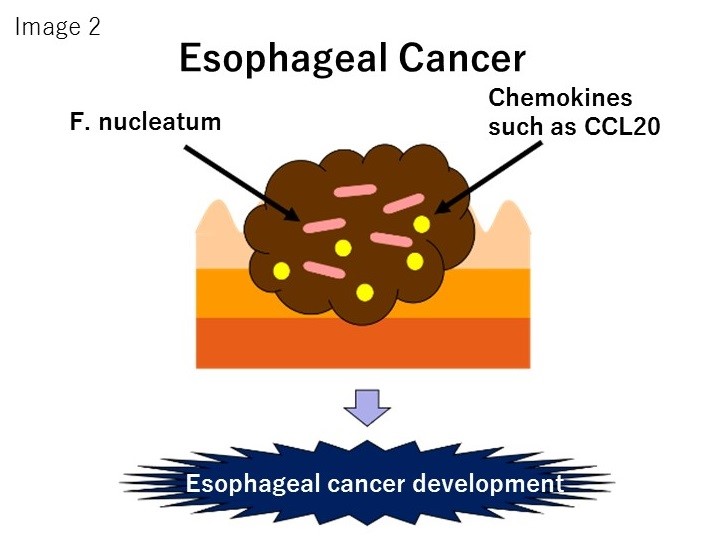 CAPTION: F. nucleatum is involved in the development of esophageal cancer via the expression of chemokines

[USAGE RESTRICTIONS] This image may only be used in conjunction with the accompanying release, or stories written about the work described in the release with reference to the original work.