Development of a wearable medical device for type 2 diabetes

Although it is effective for the treatment of diabetes, exercise is sometimes difficult for overweight or elderly people. A new wearable medical device developed by Kumamoto University has been found to effect visceral fat loss and improve blood glucose (sugar). The current study reports clinical trial results for optimal use frequency.

Type 2 diabetes is a disease of systemic organ failure due to chronic hyperglycemia and inflammation from the accumulation of excess visceral fat. Metabolic disorders such as hyperglycemia attenuate stress resistance in the human body and exacerbate insulin resistance. The ability of insulin to lower blood sugar levels is reduced and insulin secretion is decreased.

The heat shock response (HSR) is activated as a response to stress in the human body, but its function decreased in those with type 2 diabetes. A research team from Kumamoto University, Japan has found that by restoring the function of HSP72, the main protein of HSR, improved glucose-related abnormalities. The team found that a suitable combination of mild electrical stimulation (MES) with heat shock (HS) activated HSP72 more efficiently.

The researchers developed a belt-type medical device that uses a special type of rubber to transmit MES and HS at the same time. They then performed a clinical trial of MES + HS on 40 obese men suffering from type 2 diabetes. Results showed a decrease fasting glucose levels, a loss of visceral fat, improve insulin resistance, and a significant (-0.43%) improvement in glycated hemoglobin (HbA1c) values. About half of all subjects (52.5%) achieved less than 7.0% HbA1c, which is a treatment goal for diabetes. The first trial showed that activation of the HSR produced a large therapeutic effect.

In the researcher’s next clinical trial, 60 obese patients with type 2 diabetes from both genders were given a 12-week treatment with the belt-shaped MES+HS medical device. Trial subjects received treatments for 60 minutes each time, and were separated into three groups of 2, 4, and 7 treatments per week. This determined the most effective treatment frequency.

The reduction in the visceral fat area was 5.37 sq. cm in the 2 treatment per week group, 14.24 sq. cm in the 4 per week group and 16.45 sq. cm in the 7 per week group. Declines in HbA1c were 0.10%, 0.36%, and 0.65% in the 2, 4, and 7 treatment-per-week groups respectively. Improvements in chronic inflammation, fatty liver markers, renal function and lipid profile were also shown. Furthermore, adding the MES+HS treatment to a DPP-4 inhibitor, which is the most often used therapeutic drug for diabetes in Japan, showed an even stronger blood glucose improvement.

"This device is very easy to use since it simply attaches to the abdomen, and it has a low-impact on the patient. One can expect the effects to be similar to exercise therapy," said Dr. Tatsuya Kondo, who lead the research. "Even in patients who have difficulty exercising, such as those who are overweight, elderly, or have some form of disability, this device can be expected to provide acceptable treatment in addition to conventional diabetic medical care."

This research was reported in the nature.com journal "Scientific Reports" online on October 19th, 2016. 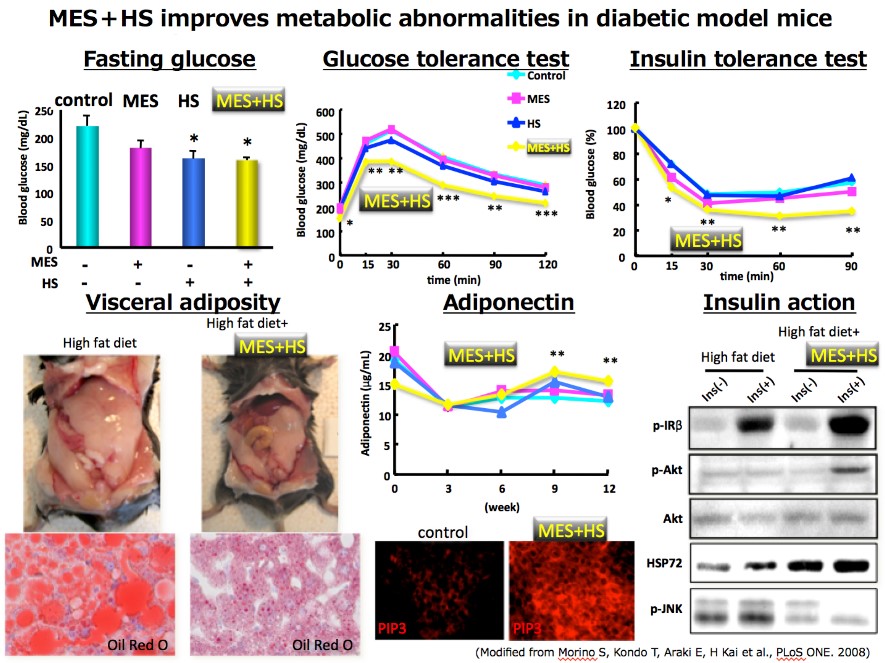 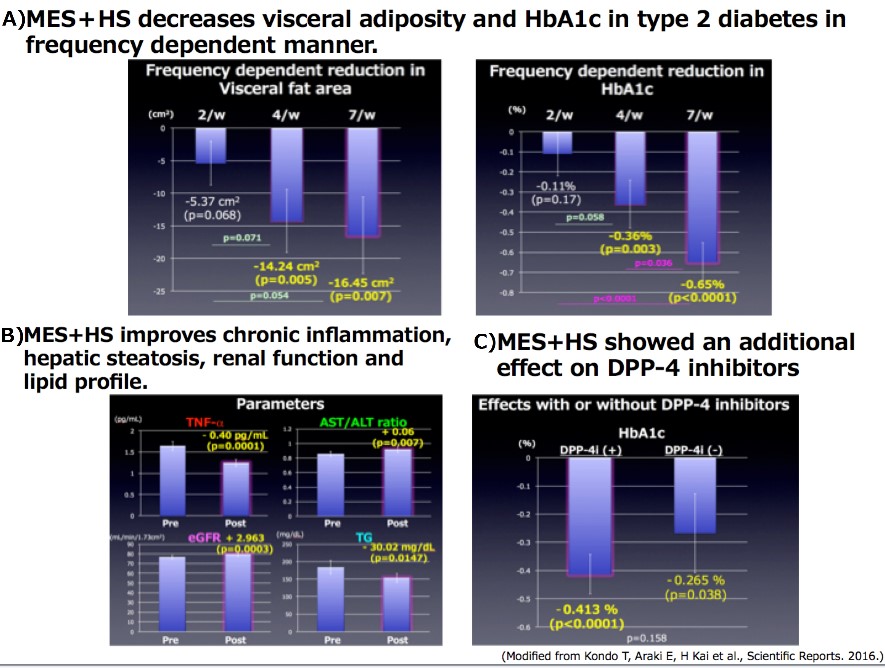