A collaboration of researchers from Kumamoto, Yamaguchi, and Osaka Universities in Japan have discovered a new method of drastically changing the color and fluorescence of a particular compound using only oxygen (O2) and hydrogen (H2) gases. The fully reversible reaction is environmentally friendly since it produces only water as a byproduct. Rather than using electrical or photo energy, the discovery uses energy from the gases themselves, which is expected to become a future trend, to switch the color and fluorescence properties. The technique could be used as a detection sensor for hydrogen or oxygen gases as well as for property controls of organic semiconductors and organic light emitting diodes (OLEDs).

Polyaromatic compounds (PACs) are widely used in fluorescent materials, semiconductor materials, organic EL devices, and organic solar-cell devices. The research performed at Kumamoto University focused on using energy from gases to trigger a molecular switch in a PAC. In particular, focus was placed on H2 as a reductant and O2 as an oxidant.

"We tried to determine the most attractive compounds that could freely and dramatically change the optical properties of the PAC with a redox reaction," said Associate Professor Hayato Ishikawa from Kumamoto University. "Specifically, we introduced an orthoquinone moiety to the PAC that possessed the most ideal switching properties under a redox reaction with hydrogen and oxygen gases."

To determine the candidates with the best switching properties, researchers screened several orthoquinone-containing aromatic compounds in a computational study. The ideal molecules clearly showed switching between fluorescence emission and quenching, and between a colored and colorless state.

Picene-13, 14-dione was nominated as the most promising candidate from the computational analysis. The researchers then developed an original protocol to efficiently synthesize the compound from commercially available petroleum raw materials. The key steps for the synthesis were the transition metal-catalyzed coupling reaction and the ring construction reaction by an organocatalyst. This synthetic methodology is also applicable to the synthesis of various other similar compounds or derivatives.

A palladium nanoparticle catalyst was added to the synthesized picene-13, 14-dione and then H2 gas was bubbled into the solution. As predicted by the computational study, a dramatic change in color and fluorescence of the solution was observed; its color and fluorescence changed from yellow to colorless, and from non-fluorescent to blue fluorescent respectively. The subsequent reverse oxidation proceeded smoothly when H2 gas was exchanged for O2 gas, and the solution reverted back to its original state.

"When we performed a detailed analysis, it was revealed that the resultant changes in color and fluorescence were caused by two different molecular states. The prediction of these states, and our ideas about this phenomenon, were strongly supported by both the computational analysis and the experimental results,” said Associate Professor Ishikawa. “This molecular switching technology of an aromatic compound using an orthoquinone moiety is a new insight that appears to have been reported first by our research team.”

An important advantage of this technology is that it is environmentally friendly since the byproduct of the reaction is simply water. Additionally, the synthetic PACs don’t experience very much damage after each reaction meaning that the molecular switch has excellent reusability.

"We have considered a wide range of future applications for this molecular technique," said Associate Professor Masaki Matsuda, a research collaborator from Kumamoto University. "For example, we can put this molecular sheet into a package of food filled with an inert gas to check whether oxygen, which promotes the spoilage of food, has entered the package. All that would be required is a simple check under a UV light; the package wouldn’t even have to be opened. Organic semiconductors and OLEDs could also benefit from the ability to control optical properties using energy from gases. For example, organic semiconductors could be made to change their electrical properties, and OLEDs could show on/off switching characteristics by using the energy from gas that is supplied to it. The applications for this technology are numerous."

The findings of this research were published in the "Angewandte Chemie International Edition," online edition, on May 4th, 2016. 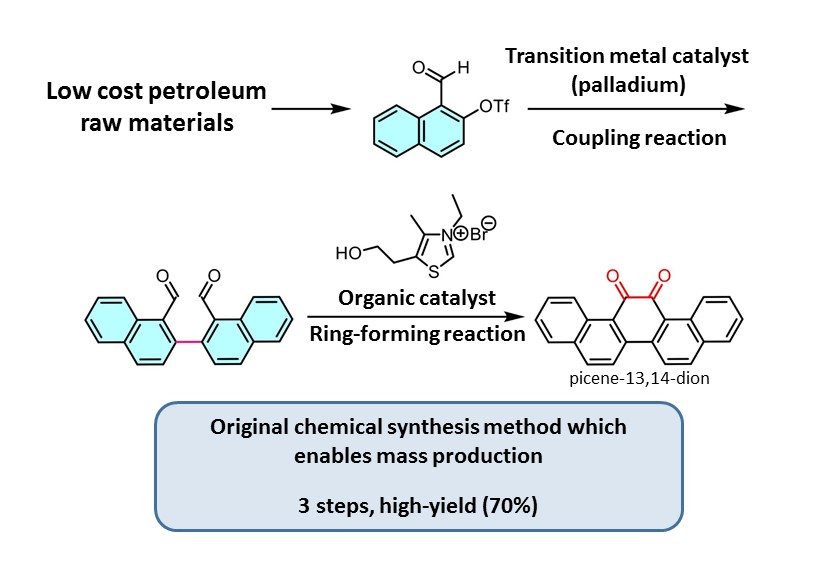 Chemical Synthesis Method
An efficient chemical synthesis method for picene-13, 14-dione.
Credit: Dr. Hayato Ishikawa
Usage Restrictions: This image may only be used in conjunction with the accompanying release, or stories written about the work described in the release with reference to the original work. 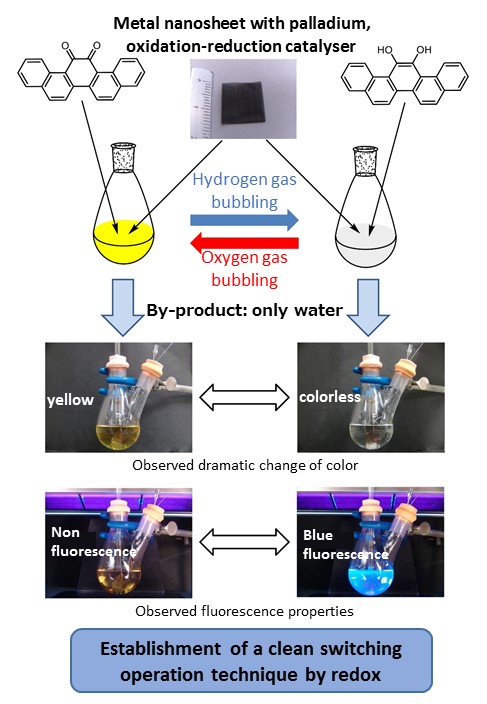 Clean switching technique by redox
The switching operation showing optical property changes due to redox using energy from bubbled gases.
Credit: Dr. Hayato Ishikawa
Usage Restrictions: This image may only be used in conjunction with the accompanying release, or stories written about the work described in the release with reference to the original work. 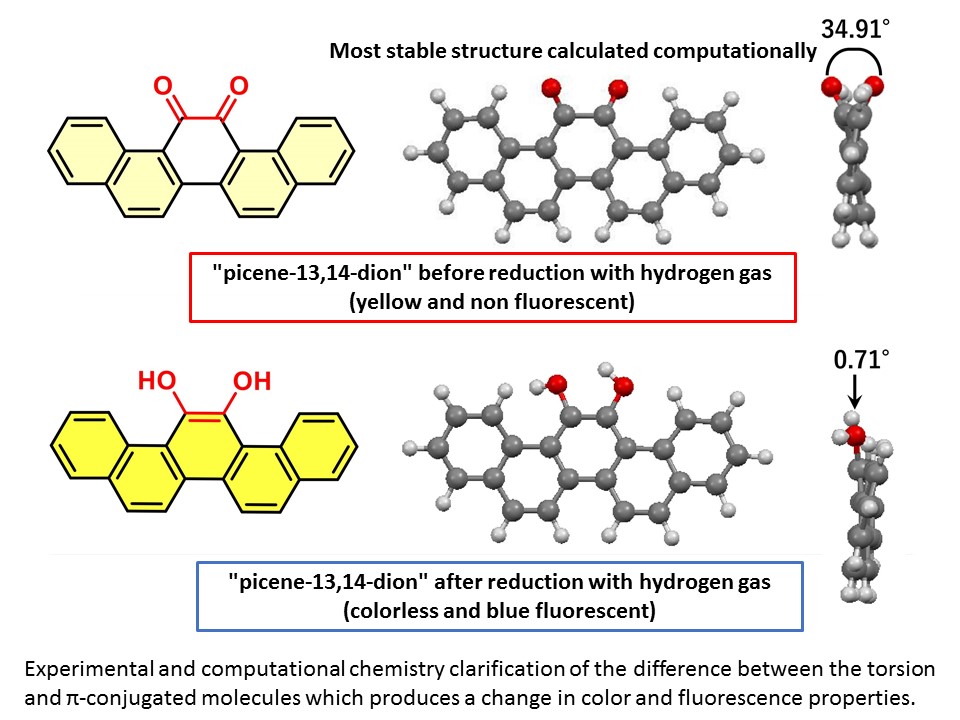 Molecular structure differences that induce a change
in optical properties of picene-13, 14-dione
Twist strain and π-conjugated molecules that induce dramatic changes in optical (color and florescence) properties of picene-13, 14-dione.
Credit: Dr. Hayato Ishikawa
Usage Restrictions: This image may only be used in conjunction with the accompanying release, or stories written about the work described in the release with reference to the original work.