Researchers of Kumamoto University in Japan have succeeded in the world's first visualization of a peptidoglycan “wall” present in the chloroplasts of bryophytes (moss plants). Until now, chloroplasts of green plants were considered to be surrounded only by two envelopes. The results of this research overturns conventional wisdom about the structure of chloroplasts.

The chloroplast is a plastid (organelle) that carries out photosynthesis in plant cells. The presently accepted theory of its origin states that a cyanobacterium, which originally had photosynthetic ability, was engulfed by a eukaryotic cell more than 1 billion years ago and eventually became the chloroplast. Chloroplasts, like their cyanobacterium ancestors, proliferate through division.

"We decided to do our analysis using the moss, Physcomitrella patens," said Professor Hiroyoshi Takano of Kumamoto University’s Graduate School of Science and Technology. "We isolated a moss gene which was homologous to a bacterial gene that encodes the enzyme D-alanine: D-alanine ligase (Ddl). This enzyme is responsible for combining 2 D-alanine molecules into the single molecule D-alanyl-D-alanine (D-Ala-D-Ala) whose only purpose within the cell is the biosynthesis of peptidoglycan. Then, we used a gene targeting technique to generate genetically modified plants without that gene."

"We think that the 'wall' structure of the moss chloroplast is closely involved in both the division and morphology of the chloroplast," said Professor Takano. "The ‘wall’ structure of chloroplasts in green plants had been considered lost during the early days of endosymbiosis. Genomic data shows that this peptidoglycan wall has indeed disappeared in angiosperms, but we have shown for the first time that it remains in a moss plant. Similar to moss, the basal land plants may also use peptidoglycan for chloroplast division. The discovery of this ‘wall’ is an important discovery that rewrites the book on the fundamental structure of the chloroplast."

Peptidoglycan surrounding moss chloroplasts
Reconstructed three-dimensional confocal micrographs showing fluorescence in the moss chloroplast caused by (left) the binding of Alexa Fluor 488 to D-Ala-D-Ala revealing a peptidoglycan “wall” and (middle) chlorophyll autofluorescence. The right image is a combination of the left and middle images. (Adapted from Figure 4B of Hirano et al., 2016) 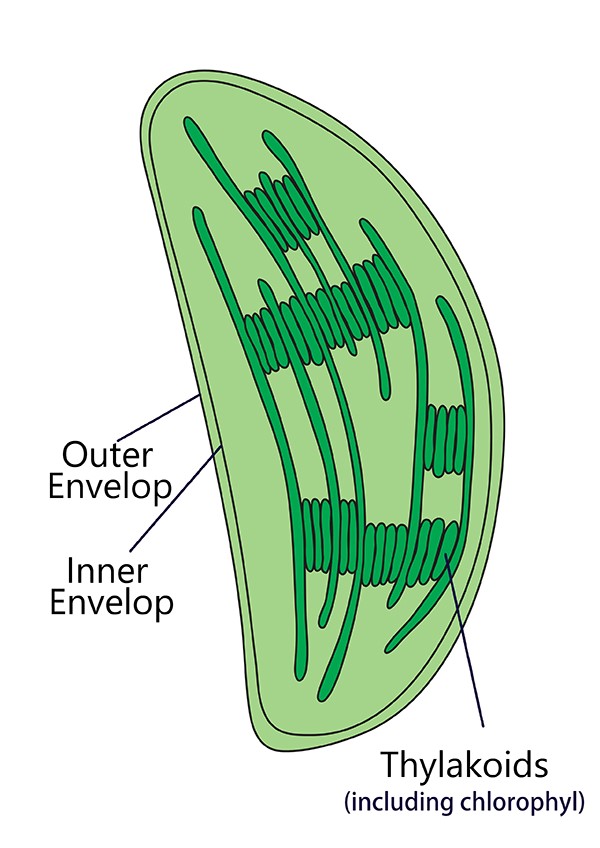 The Chloroplast
The textbook description of the chloroplast shows that it is surrounded by two envelopes. However, recent research by Kumamoto University’s Professor Takano has shown that moss chloroplasts have an extra peptidoglycan “wall.”

Usage restrictions: This image may only be used in conjunction with the accompanying release, or stories written about the work described in the release with reference to the original work (Hirano et al., 2016).