Even light drinkers should watch for fatty liver disease

People who have reduced enzyme activity to breakdown active aldehyde, i.e., those who become easily inebriated, are more likely to develop fatty liver disease even if they do not drink alcohol. This discovery was made by a clinical research team from Kumamoto University in Japan.

It is generally understood that fatty liver is triggered by alcoholism or heavy drinking. Recently, however, the number of patients with non-alcoholic fatty liver disease (NAFLD), a type of liver function disorder caused by increasing neutral fat in the liver that is caused by overeating and lack of exercise, has increased.

NAFLD is easily overlooked because of the lack of associated symptoms, and it is often only found when it has progressed to an advanced stage, such as cirrhosis., It is therefore important to detect it early so that preventative measure may be implemented.

When a person drinks, alcohol is changed to acetaldehyde in the liver. Acetaldehyde is toxic and contributes to sickness and hangovers in those who drink alcohol. Aldehyde dehydrogenase 2 (ALDH2) is a type of enzyme in stem cells that breaks down acetaldehyde and transforms it into other harmless substances. The action of the enzyme is determined genetically and affects the amount of alcohol that a person is able to consume without feeling sick.

Eastern Asia has an especially high population with low ALDH2 activity, in other words, light drinkers. Particularly in Japan where 40% of the people have low ALDH2 activity and 10% have no activity. People with low or no activity have a low risk of alcohol-related diseases, such as alcoholic fatty liver, because they drink little to no alcohol at all.

However, recent studies have reported that East Asian people with a genotype supporting low ALDH2 activity are at risk for cardiovascular disease. Further studies with mice found that ALDH2 activity reduced the accumulation of neutral fat in the liver and improved arteriosclerosis regardless of alcohol intake. Nevertheless, the association between the low activity ALDH2 genotype and NAFLD had not been made.

To determine that relationship, researchers of Kumamoto University began investigating the effects of various ALDH2 genotypes on NAFLD. A retrospective follow-up study of 341 Japanese health screening participants with no drinking habits was performed in the Japanese Red Cross Kumamoto Health Care Center. The researchers found that patients with a low activity ALDH2 genotype had a prevalence of NAFLD that was about twice as high as patients with a high activity genotype.

The patients’ gamma(γ)－GTP, which is used in daily medical practice as an indicator of liver damage, was also assessed. A value of 25.5 IU/L is usually associated with the onset of NAFLD so the researchers focused on cases which had a combination of a low activity ALDH2 genotype and a γ－GTP level that was greater than 25.5 IU/L.

"It is necessary for light or non-drinkers to pay attention to the possibility of NAFLD development," said Assistant Professor Kentaro Oniki from Kumamoto University. "Even if you don't drink much, it is recommended that you check your γ－GTP levels frequently to prevent NAFLD." Future research based on this study is expected to include treatment and early prediction of the disease.


[Paper Info]
TITLE:
The longitudinal effect of the aldehyde dehydrogenase 2 *2 allele on the risk for non-alcoholic fatty liver disease 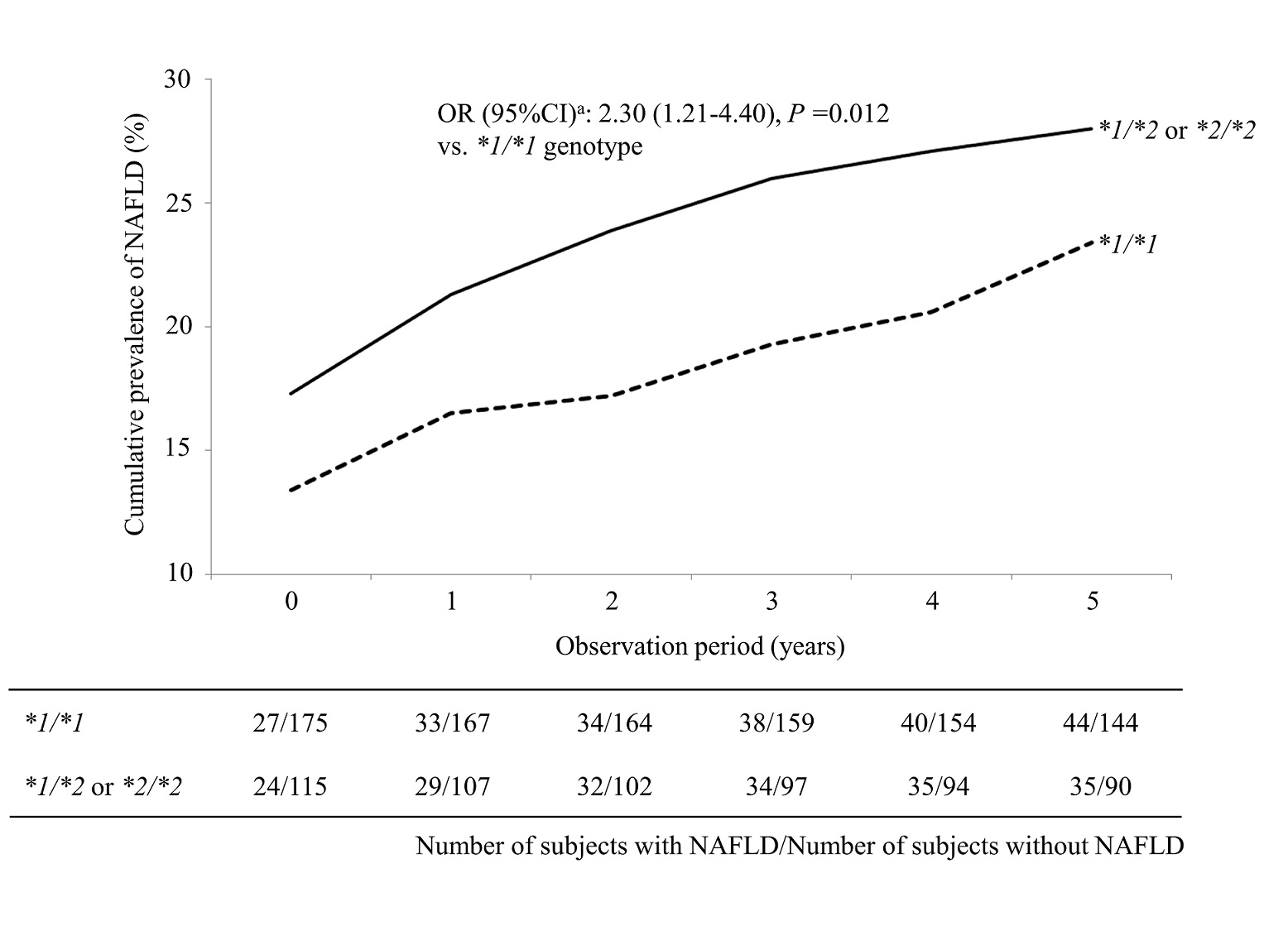