[Intro]
Scientists from Kumamoto University and The University of Tokyo Japan have elucidated the control of cellular movement during blood vessel formation. Their findings show that cellular motion occurs not in only the direction toward the tip of the blood vessels, but in a dynamically changing manner!

[Body]
Scientists from Kumamoto University and The University of Tokyo, Japan have elucidated the control of cellular movement during blood vessel formation. Their findings show that cellular motion occurs not in only the direction toward the tip of the blood vessels, but in a dynamically changing manner!

Blood vessels form a large network with countless branches to supply sufficient oxygen and nutrients efficiently to all tissues within the body. Yet, both blood vessel growth and the formation of blood vessels from a collection of cells remains largely unknown.

Vessel growth was previously considered to occur in the direction of the tip of the blood vessel, stretching in a manner that left the lead cells behind. However, according to recent studies, it was realized that both tip cells and trailing cells move around at different speeds and directions, changing positions to extend the blood vessel through endothelial cell proliferation into the surrounding matrix.

Dr. Nishiyama of Kumamoto University, Mr. Sugihara and Dr. Kurihara of The University of Tokyo and their groups studied how to gain control of the complex cellular motion involved in blood vessel proliferation. They approached the problem using a combination of biology, mathematical models and computer simulations.

"We watched the movement of the vascular endothelial cells in real time, created a mathematical model of the movement and then performed simulations on a computer," explained Dr. Nishiyama, who led the study. "We found that we could reproduce blood vessel growth and the motion of the entire cellular structure by using only very simple cell-autonomous mechanisms. The mechanisms, such as speed and direction of movement, of every single cell change stochastically. It's really interesting."

Furthermore, Dr. Nishiyama and his team increased the accuracy of the simulation by adding a new rule to the mathematical model. This rule reduced the movement of cells at the tip of the vessel as the distance between cells at the tip and subsequent cells increased.

Additionally, they completed an experiment using actual cells to confirm whether the predicted cellular movement of the simulation was a feasible biological phenomena. They performed an operation to widen the distance between the tip cells and subsequent cells using a laser. The results showed that the forward movement of the tip cells was stopped in the same manner that was predicted by the mathematical model simulations.

“We found that complex cell motility, such as that seen during blood vessel growth, is a process in which coexisting cells successfully control themselves spontaneously and move in a coordinated manner through the influence of adjacent cells. The ability to directly control this phenomenon was made apparent in our study,” said Dr. Nishiyama. "These results will add to the understanding of the formation of not only blood vessels but also various tissues and the fundamental mechanisms of the origins of the organism."

This study was published online in "Cell Reports" on November 19, 2015.
“Autonomy and non-autonomy of angiogenic cell movements revealed by experiment-driven mathematical modeling”
http://dx.doi.org/10.1016/j.celrep.2015.10.051 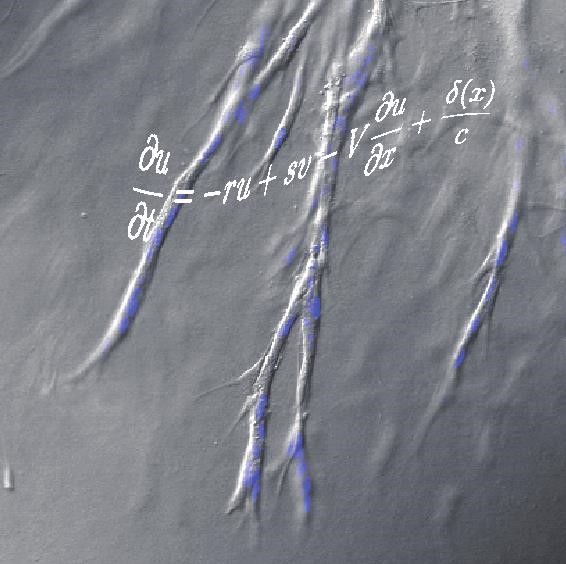