Researchers at Kumamoto University in Japan have found that patients with coronary spasm have a higher risk of experiencing future heart attack particularly when a spasm occurs at the site of atherosclerotic coronary artery narrowing, i.e., coronary atherosclerotic stenosis.

Angina is caused by the narrowing of the blood vessels that carry blood to the heart, and vasospastic angina patients account for about 40% of all angina patients. The incidence and progression of the disease can be reduced through appropriate drug treatment with relatively good prognosis. However, where stenosis of the coronary arteries has developed alongside vasospastic angina, cases of heart attack increase.

A detailed study on the positioning of coronary spasm relative to coronary artery stenosis had not been performed, until now.

Dr. Koichi Kaikita's team examined in detail the positional relationship between coronary spasm and arteriosclerosis, and compared the case data of patients with spasm occurring at sites of coronary atherosclerotic stenosis to those whose spasm occurred at another site.

Data was gathered from 1,760 cardiology patients of Kumamoto University Hospital between 1991 to 2010 who experienced chest pain and underwent cardiac catheterization at rest.

Out of the 1,760 cases, coronary spasm occurred 873 times and constriction of a coronary artery was observed 358 times.

“Our research shows that coronary spasm occurring at the site of coronary atherosclerotic stenosis is a predictor for acute coronary syndrome,” said Dr. Koichi Kaikita. “In other words, these people have a high risk for heart attack in the relatively near future.”

Checking for the occurrence of a coronary artery spasm at sites of coronary artery stenosis helps predict a person’s risk for a future heart attack and may be useful for beginning sufficient preventative therapy.

This study was published online in “The Journal of the American College of Cardiology” on August 31, 2015.
“Acetylcholine-Provoked Coronary Spasm at Site of Significant Organic Stenosis Predicts Poor Prognosis in Patients With Coronary Vasospastic Angina”
http://content.onlinejacc.org/article.aspx?articleID=2431385 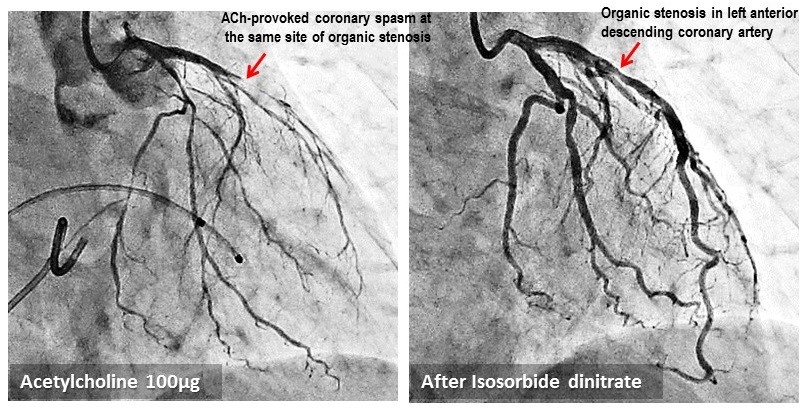